Michele MacDonald on the background of the operation's $1.1m Uncle Mo filly 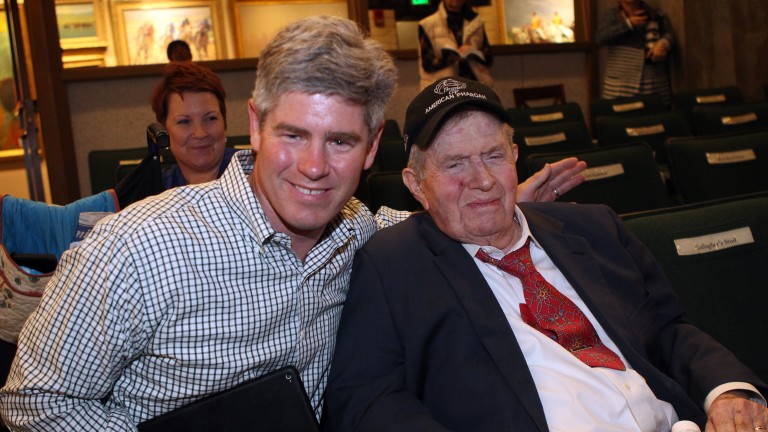 A single horse can change the fortunes of a farm, and in large measure, a French-bred mare acquired 37 years ago has done just that for historic Runnymede Farm.

For only the second time in its 151-year history, the Paris, Kentucky nursery sold a seven-figure yearling at Keeneland on Wednesday and it was no surprise that this one, just like the first big-ticket yearling sale in 2004, was a descendant of that mare, Kazadancoa.

“This is really gratifying,” Runnymede chief executive Brutus Clay III said, his voice choked with emotion, after watching the farm’s athletic filly by Uncle Mo out of Bizzy Caroline, a multiple Graded stakes-winning half-sister to champion Lady Eli, sell to Godolphin for $1.1 million.

Representing the fourth generation of his family to operate the farm, Clay was joined in the Keeneland sale pavilion by his 95-year-old father, Catesby, who bought a partial share in Kazadancoa in 1981. Clay later acquired the remaining interest in the daughter of Green Dancer who was out of a half-sister to the dam of French champion and international sire Blushing Groom.

Granddaughter Regina Maria, by Unbridled, produced the $1.9m colt from Galileo’s first crop who Demi O’Byrne purchased from the farm’s consignment at the Keeneland September sale in 2004 on behalf of Coolmore. The catalogue page for the Uncle Mo filly, offered as Hip 703, shows that she also has Kazadancoa as her third dam.

While Kazadancoa died at Runnymede in 2011 at the age of 33, her legacy was – and still is – evolving. Her winning Saint Ballado daughter, Sacre Coeur, conceived champion Lady Eli in 2011 after foaling Bizzy Caroline in 2008, and both Sacre Coeur and Bizzy Caroline continue to deliver foals for Runnymede. 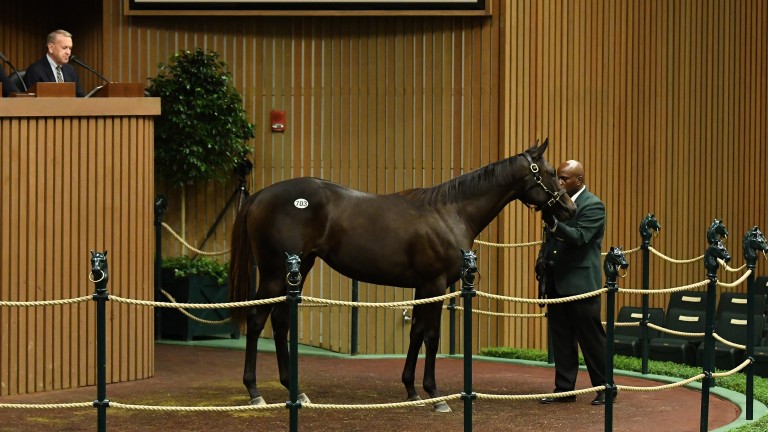 Hip 703: the Uncle Mo filly bought by Godolphin for $1.1 million
Keeneland Photo
“We knew this filly was special on the farm,” Brutus Clay said of the Uncle Mo yearling. “She takes after her mother, who won Graded stakes for us, and Lady Eli [a daughter of Divine Park who was sold by Runnymede as a yearling for $160,000]. They share the same personality traits – they’re tough and determined.

“This one has her mother’s eye, her head, her body, her mind. She’s strong,” he added. “I found it so striking that she really lit up when she came into the back walking ring. She was all business.”

Godolphin’s Anthony Stroud, who signed the ticket, said “there is every possibility” the Uncle Mo filly will stay in America to race, but that a decision will be made later by Sheikh Mohammed.

“She’s a lovely filly with a very nice pedigree from a very good farm. When she finishes racing, she’ll be a very good addition to Godolphin’s broodmare band,” Stroud said.

Clay, who noted he has a special fondness for Bizzy Caroline as the mare is named after his daughter Caroline and his niece, Elizabeth, who is nicknamed 'Bizzy', said he hopes that the Uncle Mo filly “ends up being a heck of a buy” for Godolphin.

Whatever her racing fortunes might be, the filly was certainly a grand sale for the farm, which Clay and his seven siblings had to restructure following their father’s retirement from full-time operational duties in 2009.

“Since we took over in 2009, not too many people wanted to buy a racehorse,” Clay reflected, recalling the struggles that ensued in the wake of the global economic crash.

“My family members, my siblings, have stuck with us as we have been working to rebuild the farm. It’s been a lot of work to get here,” said Clay, who hired French native Romain Malhouitre in 2013 as general manager. “It’s just such an honor to experience this on behalf of the family.”

With a broodmare band that typically numbers around 20 to 25, Runnymede is a relatively small but respected commercial breeding operation that is regarded as the oldest continually operated nursery in America following its founding in 1867 by Brutus Clay’s great grandfather after the end of the Civil War.

Both Catesby and Brutus Clay have maintained connections with European racing and breeding, and Runnymede has partnered recently with Haras d’Etreham on bloodstock. One mare the two farms are connected with is With Your Spirit, by Invincible Spirit and out of Kazadancoa’s granddaughter Palace Weekend.

With Your Spirit’s first foal, the Lope De Vega colt Duke Of Hazzard, finished second by a short head for owner Fitri Hay in the Criterium du Fonds Europeen de l'Elevage at Deauville on August 18. A half-sister to Racing Post Trophy winner and sire Palace Episode, With Your Spirit delivered a filly by Teofilo at Etreham in February.

While Lady Eli, who was raced by Sheep Pond Partners and famously battled back from laminitis to become American champion turf female of 2017, is in foal to War Front and will be offered for sale at Keeneland in November, members of her family remain favourites at Runnymede.

Sacre Coeur has a robust yearling American Pharoah filly that the farm has retained to race with partners, and the mare produced a beautiful colt by the Triple Crown winner this year.

Runnymede also has retained Bizzy Caroline’s now two-year-old daughter, Tenacious Jewel, by Medaglia D’Oro, and she is in training with Arnaud Delacour. Bizzy Caroline produced a filly by Union Rags in April and was bred back to Quality Road.

“She just keeps on giving,” Clay said. “We are so blessed and grateful.”

FIRST PUBLISHED 11:14AM, SEP 13 2018
She takes after her mother, who won Graded stakes for us, and Lady Eli. They share the same personality traits - they’re tough and determined