Frankel well represented in barrier trials down under

Woman finished fourth of six in her barrier trial at Randwick 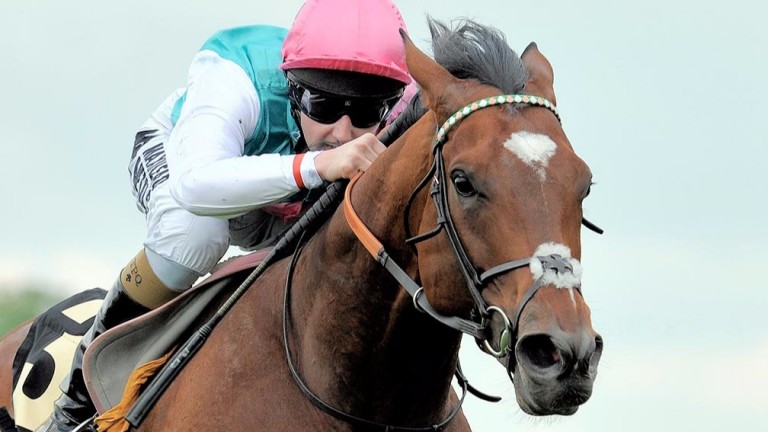 Frankel looks as if he may be on course to achieve what even his father Galileo struggled to do, in replicating his northern hemisphere success to a similar degree below the equator.

The dual world champion has now been represented in two barrier trials and both regally bred two-year olds have shown genuine promise.

Monday morning saw Woman, the first foal out of champion racemare More Joyous, become the second of Frankel's Australian progeny make to their racecourse debut. The filly ran a hugely promising barrier trial to finish fourth, beaten just over half a length.

"She began slowly out of the barriers but she managed to muster through - she travelled nicely and just kept picking up in the straight," remarked jockey Kerrin McEvoy, who won this season's Melbourne Cup aboard Almandin.

With the trial run over just 741 metres (3.7 furlongs) it was no surprise to see Woman make progress late having settled. Only minimal encouragement was required from McEvoy for Woman to join the leading trio, all of whom had the benefit of at least one previous trial.

"She moves really well," he continued. "She'll keep improving and the best is yet to come from her."

Gai Waterhouse, who trains the filly with co-trainer Adrian Bott added: "She's out of a champion, by the world's highest rated racehorse - they're big shoes to fill but we're excited about the filly.

She's not bred to be a two-year-old but the good ones always show something early and she is certainly doing that.

"We'll see the best of her over middle distances in time but we couldn't be more pleased with her at this point. She's a very special filly."

Kerrin McEvoy also partnered Frankel's only other Australian representative, the Chris Waller-trained A$1.6m yearling Merovee, in a Rosehill barrier trial ten days ago. Like Woman, Merovee started slowly but settled comfortably towards the rear of the field before making headway while still on the bridle to finish fourth.

"It's very exciting to have some of Frankel's progeny out here and I've been lucky enough to sit on a couple of them," continued McEvoy.

"The colt of Chris Waller's [Merovee] is a nice horse who is only going to keep improving. He gave me a nice feel in his trial."

Merovee is out of More Strawberries, a dual Group 2 winner who finished third in the Golden Slipper. More Strawberries is also a half-sister to Emirates Stakes winner and sire All American, who was centre stage last year thanks to his Group 1-winning two-year-old daughter Yankee Rose.

Woman and Merovee were both bred by John Singleton's Strawberry Hill Stud.

Chris Waller's racing manager Charlie Duckworth confirmed the yard hold the colt in the highest regard. Merovee is set to spend the next couple of weeks in the paddock before reappearing in a trial towards the end of February with the Group 1 JJ Atkins over a mile in June his seasonal target.

Frankel's offspring have already proven popular in Australia. Five of his progeny were offered at the 2016 Inglis Easter Yearling Sale with four lots selling for an average of A$865,000. That made the son of Galileo the leading sire of the sale by average.

One filly, out of Jeu De Cartes, was exported to Japan following her sale, which leaves Frankel with a total of five two-year-olds to run for him in Australia. Woman was the only member of Frankel's Australian two-year-olds not to go under the hammer.

Frankel has a consistent number of offspring to continue his momentum in Australia with seven yearlings and four foals listed with the Australian Stud Book. Six of those 11 mares have either won, produced or are closely related to Group 1 winners, with a further two mares who are direct descendants of Santhas Choice, the dam of Redoute's Choice and Manhattan Rain, and Allegretta, the dam of Urban Sea.

Those further regally bred crops, though small in number, have the potential to keep up the delicate momentum that has been generated by the promising trials of both Woman and Merovee.