Frankel posts a pair of promising new winners at Killarney

Sons Eminent Authority and Mujid are out of high-achieving racemares 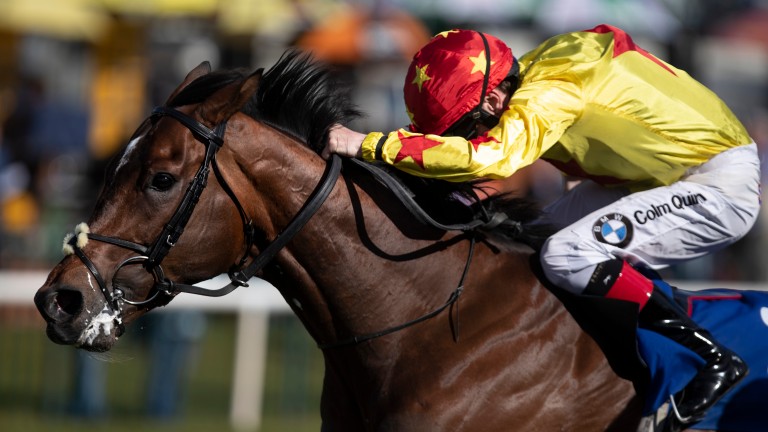 Eminent Authority: carries the colours of Sun Stud
Patrick McCann
1 of 1
By Martin Stevens 8:41PM, MAY 14 2019

Banstead Manor Stud colleagues Frankel and Kingman have been jostling each other for attention in the past week, with the former fielding the exciting Oaks trial winners Anapurna and Mehdaayih and the latter supplying a host of promising maiden scorers and a debut Classic victor in Persian King.

It was Frankel's turn in the spotlight at Killarney on Tuesday, though, as the dual world champion was represented by two new winners who each appear to hold a fair amount of promise.

Eminent Authority initiated the double when sticking on well to win the three-year-old maiden over 1m3f on debut for trainer Joseph O'Brien and owner Sun Stud.

Mujid makes all over a mile

The colt, bred by March Thoroughbreds, is a brother to Master Of Reality, who pulled off a shock victory in the Group 3 Vintage Crop Stakes at Navan for O'Brien last month and holds an entry in the Saval Beg Stakes at Leopardstown on Friday.

He is also a three-parts brother to Chamonix (by Galileo), a dual Listed winner over 1m4f on heavy, and a closely related sibling to Point Of Principle (by Rip Van Winkle), who finished second in a Grade 3 handicap hurdle at the recent Grand National meeting at Aintree.

Another three-parts sister is Minkova, an unraced daughter of Sadler's Wells who is dam of Chester Cup and Henry II Stakes winner Magic Circle, who finished third in the Ormonde Stakes last week.

Eminent Authority is out of L'Ancresse, a daughter of Darshaan who was a Listed winner and twice a runner-up at the highest level – behind Vintage Tipple in the Irish Oaks and to Islington in the Breeders' Cup Filly & Mare Turf.

L'Ancresse, who has two-year-old and yearling fillies by Frankel, is a sister to Cerulean Sky, winner of the Prix Saint-Alary and dam of Doncaster Cup scorer Honolulu, and a three-parts sister to Moonstone, who was successful in the Irish Oaks and has produced at stud stakes winners Nelson, Nevis, Stubbs, Words and US Army Ranger – the last-named having also finished second in the Derby.

“Eminent Authority is a grand big horse,” said jockey Declan McDonogh after the maiden victory. “He came on the bridle good, I got a nice split on the inside and he hit the line well. I was always going to win when I got out.

“He'll be a nicer horse on the Curragh or somewhere like that.”

Eminent Authority was bought by Sun Bloodstock for €160,000 from the draft of La Motteraye Consignment at the Arqana August Yearling Sale in 2017.

Frankel's Killarney double was sealed by Mujid, who improved on finishing sixth on debut at Gowran Park last month to make all and score by four lengths under hands and heels riding by jockey Conor Hoban. 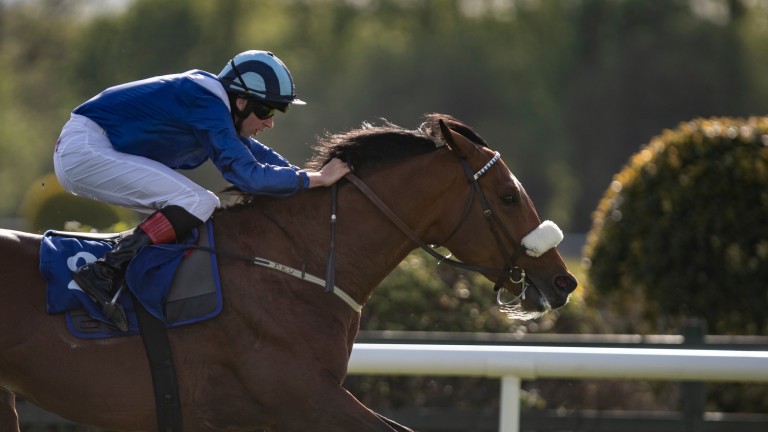 Mujid: has a Classic-winning dam in the shape of Irish 1,000 Guineas heroine Bethrah
Patrick McCann

The four-year-old colt, trained by Dermot Weld for owner-breeder Hamdan Al Maktoum, is the fourth foal out of Irish 1,000 Guineas heroine Bethrah but only her second winner after Alsinaafy, a son of Oasis Dream who has scored in the US.

Bethrah – a daughter of Marju and Reve D'Iman, a winning sister to Prix Saint-Alary victress Reve D'Oscar – also has a two-year-old colt by Frankel in training with John Gosden.

Hoban reported after riding Mujid to victory: “Mujid did that nicely considering he didn't really handle the track. He was still a bit green as it was only his second start but I thought it was a nice performance.

“He had a lovely run at Gowran and he stepped forward from it. I don't know how strong the race was but he did it well.”

Frankel, who is nearing the end of his seventh covering season at Banstead Manor Stud, is the sire of 41 stakes winners headed by six who have earned Group/Grade 1 laurels – Call The Wind, Cracksman, Dream Castle, Mozu Ascot, Soul Stirring and Without Parole.

FIRST PUBLISHED 8:41PM, MAY 14 2019
Eminent Authority is a brother to Master Of Reality, who pulled off a shock victory in the Group 3 Vintage Crop Stakes at Navan for O'Brien last month