Charlie Gordon-Watson has the final say for the top lot 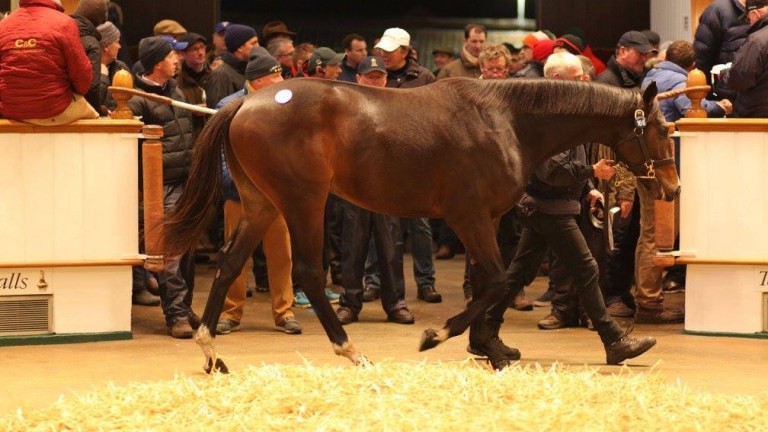 The Frankel half-brother to Hartnell in the ring at Tattersalls
Laura Green
1 of 1
By Nancy Sexton at Tattersalls 5:02PM, NOV 23 2016

The Frankel half-brother to leading Australian performer Hartnell lived up to his star billing at Tattersalls on Monday as the company's December Sale got underway with a single yearling instalment.

Monday represented a second roll of the dice at auction this year for a number of the catalogue and the Frankel colt was no exception, having failed to change hands for $325,000 at the Keeneland September Sale in Kentucky.

Although he reached a similar level in the ring this time around, there was a happier outcome with Charlie Gordon-Watson signing at 250,000gns to secure him on behalf of an owner with Ed Dunlop.

"My client wanted two horses but we discussed it and felt it would be better to target one," said Gordon-Watson. "There's an Arc winner on the page [Suave Dancer] and I particularly like Anabaa mares - he's out of a very smart one."

The colt was bred by Greg Goodman's Mt. Brilliant Broodmares and foaled at Highclere Stud, out of whose draft he sold yesterday. He is the fourth foal out of Debonnaire, already the dam of Godolphin's Hartnell, a dual Group 1 winner for John O'Shea, and Listed winner Roz.

Highclere Stud also broke the six-figure barrier with a Galileo colt that sold for 110,000gns to Jamie Railton.

"He's been bought to breeze with the Channel Consignment, probably at Arqana next May," said Railton. "We saw his younger sister make $550,000 at Fasig-Tipton recently. It's a wonderful family."

The colt, who missed his engagement in Book 1 of the Tattersalls October Sale, is the first foal out of Better Not Cry, a Street Cry half-sister to Belmont Stakes winners Rags To Riches and Jazil.

Johnny McKeever struck at 170,000gns for the dearest filly of the day, a Sea The Stars half-sister to the Italian Oaks winners Charity Line, Final Score and Cherry Collect bred by Razza del Velino out of their excellent producer Holy Moon.

McKeever outbid Marco Botti on behalf of Mrs Ling Tsui, whose son Christopher campaigned Sea The Stars to such success.

George Baker will take charge of a Kodiac half-brother to Ripon Champion 2yo Trophy winner Hold Your Colour, who cost 120,000gns through Blandford Bloodstock.

Tom Goff signed the ticket on the youngster, offered by Rathbarry Stud.

"The half-brother Hold Your Colour was a good horse and another half-brother, Arcano Gold, was highly rated. This horse is a classic, classy Kodiac who looks a two-year-old."

Middleham Park Stud added another yearling to their sizeable army for next year when going to 110,000gns for an Acclamation colt from Gaynestown Stud.

"He'll probably go to Richard Hannon," said syndicate manager Tom Palin of the colt, a 44,000gns foal pinhook through Peter and Ross Doyle. "He has a walk to die for and looks a ready made runner. He reminded us a lot of Mehmas, who is by the same sire."

The 110,000gns mark was also realised by a Dutch Art grandson of Musidora Stakes winner Secret History from Carmel Stud, who was bought by Richard Brown of Blandford Bloodstock to join Simon Crisford.

"He was in Book 1 but had a hiccup and couldn't go," said Brown. "He looked the sort that would have stacked up well there and looks a two-year-old."

The December Yearling Sale completed a record year of yearling trade for Tattersalls, which turned over approximately 137,225,000gns during the course of the yearling sales season.

FIRST PUBLISHED 8:58PM, NOV 21 2016
My client wanted two horses but we discussed it and felt it would be better to target one