Four Ballymacoll mares to be offered at November Sale

Among them is the dam of Melbourne Cup hero Fiorente 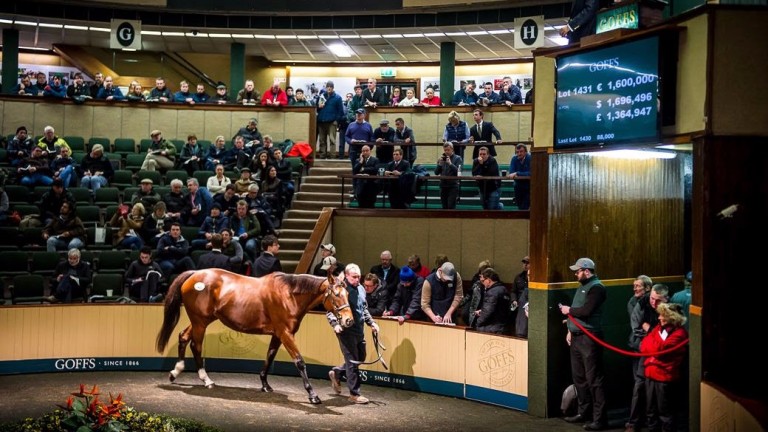 Goffs: four mares will be dispersed from Ballymacoll Stud at this year's November Sale
Goffs
1 of 1
By Ollie O'Donoghue 5:50PM, AUG 4 2017

Four Ballymacoll mares have been confirmed for the Goffs November Sale, as part of the farm's dispersal that began with the sale of five lots at this year's Goffs February Sale.

That draft, from the Jockey Hall Stud, was topped by Edith Wharton who was sold to Andy Smith on behalf of Peter Brant's White Birch Farm for €200,000, and Jockey Hall will again be consigning this time round.

Among the four mares on offer is the half-sister of a Derby winner and the dam of a Melbourne Cup winner.

Rien Ne Vas Plus is a nine-year-old Oasis Dream half-sister to the 2004 Derby winner North Light and is offered in foal to Markaz.

Her dam, Sought Out, won the 1992 Prix du Cadran and has produced four other winners including two-time Group 3 winner Cover Up and Listed winner Researched.

Desert Bloom, by Pilsudski out of the Green Desert mare Desert Beauty, is the dam of three winners, and the best of her brood is the 2013 Melbourne Cup winner Fiorente.

Desert Bloom will be offered in foal to Teofilo, and will be sold alongside her Sadler's Wells half-sister Olympienne.

Olympienne, who has already produced the Group 3 winners Patkai and Modun and the Group 2-placed Saptapadi, will be offered in foal to Alhebayeb.

Completing the quartet is Drama Class, a Listed-placed Caerleon mare. Among her best progeny to date is Group 2 winner Eleanora Duse and the Group 1-placed Scottish Stage.

Champion three-year-old stayers Conduit and Millenary appear further back in the pedigree of Drama Class, who will be offered in foal to Acclamation.

"We are delighted to be further involved in the dispersal of the iconic Ballymacoll broodmare band," said Henry Beeby, chief executive of the Goffs Group.

"The first part sold extremely well at Goffs in February, and this quartet offers a further opportunity to share in the legacy of such a successful breeding programme."

FIRST PUBLISHED 5:38PM, AUG 4 2017
This quartet offers a further opportunity to share in the legacy of such a successful breeding programme