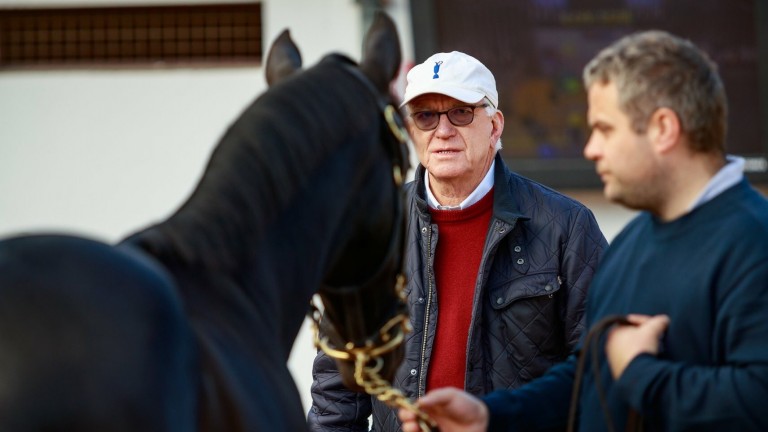 John Foote travelled all the way to Arqana from Indooroopilly in Queensland, Australia
Zuzanna Lupa
1 of 1
By James Thomas 3:44PM, OCT 26 2018

Among a diverse international cast of buyers at Arqana, no one in Deauville could compete with the air miles Australian John Foote had racked up. And the agent ensured that the 10,350 mile trip from Indooroopilly, Queensland was a productive one, as his name appeared on the docket of seven yearlings across the first three days of the October Yearling Sale.

The priciest of those from Thursday's session was a €85,000 son of German Derby winner Sea The Moon, whose first crop contains a brace of Group 3 winners, Noble Moon and Quest The Moon.

"He's not very big - he's a first foal - but he's just a nice horse that moved particularly well," Foote said of the Haras de Bourgeauville-consigned youngster. "He'll stay with a trainer in Deauville for the time being and the owner will make a decision about his long-term future later on."

The long term figures prominently in plans for Foote's purchases, a haul that includes yearlings by Camelot, Holy Roman Emperor, Iffraaj, Intello and Wootton Bassett, with several of those now bound for the Australian yard of Darren Weir, where they will be prepared with middle-distance careers in mind.

Despite European-bred yearlings seeming at a developmental disadvantage when coming up against their Australian-bred peers, a patient approach will be applied, while Foote noted that, with the right expertise, nurture can overcome nature.

"The Australian breeders don't breed stayers, and there's only a few stallions in New Zealand whose progeny stay middle distances, so we're restricted with where we can buy this sort of horse," he said. "That's why it makes sense to come here. People talk about the difference in time with these horses, but as long as you've got the right trainer who knows how to handle this type it's not a problem."

Foote may have been making his first visit to Arqana, but he is by no means a stranger to European shores - and pedigrees - having completed numerous successful cross-hemisphere raids down the years.

"I worked for the BBA in 1976 and I've been coming back to Europe ever since," he explained. "I've been buying mares in England for years but the yearling thing is a bit more recent and this is my first time looking at yearlings at Arqana.

"We've not bought many yearlings in Europe down the years, but we've already done well with horses like Signoff, Furrion and Fifty Stars."

Foote's global buying expeditions have already yielded iconic results in Australia, with perhaps his most productive visit coming in 1998 when he sourced Tugela - better known as the dam of three-time Melbourne Cup heroine Makybe Diva - from Tattersalls.

"I looked at her initially because she was by Riverman, she wasn't very big and was a bit offset in the knees but I really liked her, she was a beautiful little mare," he recalled, before adding with some understatement: "She proved to be very lucky."

Despite the fruits of past trips, Foote was not wholly positive regarding the future of his European ventures.

As a relative outsider to the European bloodstock scene, he is well placed to offer objective appraisal, and the increased emphasis on speed and precocity - and subsequent marginalisation of middle-distance blood - has not passed the Australian by.

"You're getting a bit like us in the southern hemisphere, which is unfortunate," he noted ruefully. "Since I bought Signoff [in 2011] there are less yearlings for me to look at each year, which is disappointing."

FIRST PUBLISHED 3:44PM, OCT 26 2018
Foote is by no means a stranger to European shores - and pedigrees - having completed numerous successful cross-hemisphere raids down the years