Daughter of Dabirsim will be offered by Amy Marnane 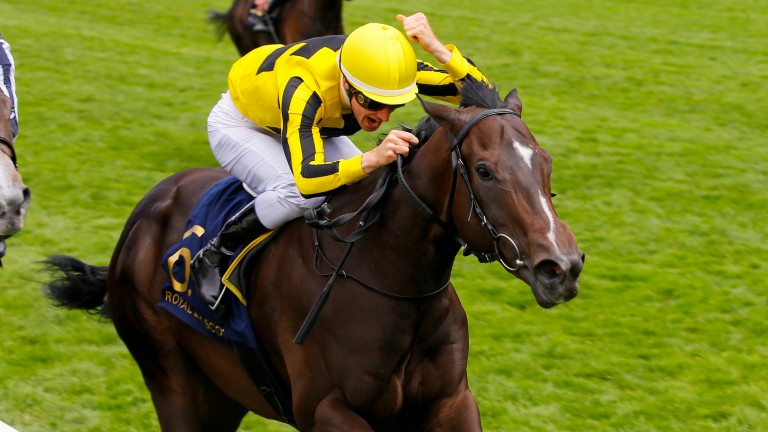 Different League: the daughter of Dabirsim cruises to success in the Albany Stakes
Mark Cranham
1 of 1
By James Thomas 5:40PM, OCT 23 2017

Crack juvenile filly Different League is the latest big name to be given a date with the auctioneer at the upcoming Tattersalls December Sale.

The daughter of flying freshman sire Dabirsim carried the colours of Theresa Marnane, wife of leading breeze-up consignor Con, to victory on her first three starts, a run that culminated with success in the Group 3 Albany Stakes at Royal Ascot.

She has subsequently hit the frame in two Group 1 events, finishing third to Unfortunately in the Prix Morny before running second to Clemmie in the Cheveley Park Stakes.

"Her name says it all," said Con Marnane, whose daughter Amy will consign the filly. "Different League has been an absolute revelation. She has reached the heights that only Olympic-winning athletes can aspire to. Her win at Royal Ascot under a hand ride from Antoine Hamelin was truly breathtaking.

"She has all the credentials to continue at the highest level next year and beyond. She is a quality, big, scopey filly oozing class with a temperament to die for; an obvious contender for next year’s 1000 Guineas, and because of her French owners' premiums, also the Poule d’Essai des Pouliches.

"Either way, she is a genuine Classic prospect and has been a pleasure to be around since the moment she came into our lives. You couldn’t write the script of the adventure Different League has brought us on."

While Different League looks sure to have plenty of admirers when she goes under the hammer at the auction, which takes place at Park Paddocks from December 4, that has not always been the case. She was first sold as a foal, when fetching just €8,000, before failing to sell at £14,000 as a yearling the following year.

"The Marnane family have campaigned Different League impeccably and she is without doubt one of the most exciting two-year-olds to be offered at the Tattersalls December Sale for a very long time," said Tattersalls chairman Edmond Mahony. "Genuine Group 1 two-year-olds seldom appear at public auction and Different League is a rare opportunity for buyers to acquire a serious contender for 2018 Classic honours."

Marvellous Marsha to light up the Tattersalls board in December

FIRST PUBLISHED 5:40PM, OCT 23 2017
Different League has been an absolute revelation. She has reached the heights that only Olympic-winning athletes can aspire to