Five surprising things we learned from the 2016 edition

Shamardal, Jim Bolger and National Hunt mares among the points of interest 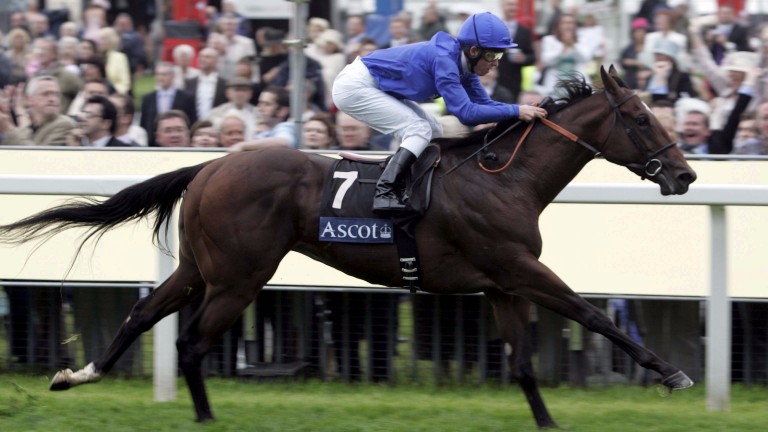 Shamardal, a linchpin of Sheikh Mohammed’s European stallion roster, was advertised at a private fee for the first time in 2016 and ‘private’ turned out to be the operative word for the naure of his past covering season.

The sire of 18 individual Group/Grade 1 winners - including Dariyan, Speedy Boarding and Tryster in the past 12 months - is recorded by Weatherbys in its recently published Return of Mares as having covered 109 mares.

Out of those 109, 67 were owned by Sheikh Mohammed’s Godolphin operation; 26 to Rabbah Bloodstock, a group of the sheikh’s extended family and associates; 13 to Shadwell, the outfit of his brother Hamdan Al Maktoum. One was sent by Postponed’s owner Sheikh Mohammed Obaid, a cousin of Sheikh Mohammed, and another came from Hadi Al Tajir, an owner whose horses have been sold on as part of Shadwell drafts in the past.

Just one mare in Shamardal’s 2016 book is registered as owned by an entity not associated with the Maktoum family, and that was Patronising, a Galileo half-sister to Lillie Langtry belonging to Bjorn Nielsen.

It was a different story in 2015, when the sire covered 129 mares at a fee of €70,000 at Kildangan Stud. A multitude of breeders welcomed his foals this year, including the Aga Khan Studs, Watership Down Stud, Newsells Park Stud, Cheveley Park Stud and the Wertheimer brothers.

Shamardal was, to all intents and purposes, a private Maktoum family stallion this year. He is being advertised as standing at a private fee again for 2017 so it remains to be seen whether he will return to covering more outside mares.

Godolphin bought a share of undisclosed size in Yeomanstown Stud’s red-hot resident Dark Angel last year and 22 of the sire’s 195 mares covered in 2016 were registered as owned by Sheikh Mohammed’s operation.

Those 22 included some high-class racemares, including Nahoodh, Sander Camillo, Saoirse Abu and Silca’s Sister, as well as the dams of Group 1 winners Amadeus Wolf (Rachelle) and Lucky Nine (Birjand).

Shadwell sent Dark Angel ten mares this year and there was a smattering of Rabbah Bloodstock mares in there too.

The stallion - whose talents were advertised this year by Mecca’s Angel, Ardhoomey and Harry Angel - keeps exclusive company these days. The Aga Khan Studs, Juddmonte, the Wildenstein family, the Niarchos family, Cheveley Park Stud and Newsells Park Stud were among the other blue-chip breeders who sent him mares in 2016.

It is always interesting to follow Jim Bolger’s matings as the master breeder and trainer often comes up with some idiosyncratic choices.

Having put his faith in Galileo in his early years Bolger has in recent seasons reaped the rewards by sending many of his best mares to Galileo’s Group 1-producing sons New Approach and Teofilo, who he trained and retained breeding rights in. He has also supported his own stallions Glor Na Mara and Vocalised of late.

However, this year Bolger appears to have latched onto an established but unheralded stallion who covered a grand total of zero mares in 2015, according to Weatherbys.

He sent around 40 mares to Fracas, a son of In The Wings who won the Derrinstown Stud Derby Trial and finished fourth in Motivator’s Derby, at Cahermorris Stables in the year after he had trained the sire’s son Smash Williams - bred by Cahermorris - to win the Round Tower Stakes and finish third in the Criterium de Maisons-Laffitte.

Another notable facet of his book in 2016 was that he covered Cahermorris Stables’ Irish 1,000 Guineas heroine Saoire, who in previous years has visited Galileo, Giant’s Causeway, Invincible Spirit and New Approach.

While no British-based jumps sire can match the firepower of their most popular Irish counterparts - the domestic National Hunt broodmare band is a fraction the size it is in Ireland - three found themselves in strong demand and covered six-figure books this year.

Shade Oak Stud recruit Telescope was given a warm welcome, with 130 names on the son of Galileo’s dance card, as was Yorton Farm’s French acquisition Blue Bresil, whose gallic charm enticed breeders to send him 134 mares.

With Kayf Tara riding the crest of the wave, with three Cheltenham Festival Grade 1 winners this year including the exceptional Thistlecrack, and exciting new young blood around, the British jumps stallion scene has not looked so good in a long time.

And that’s not to mention some longer-established stallions who arguably deserve more recognition. A tally of 30 mares for Sulamani at Overbury Stud this year is an improvement on the 17 he covered in 2015, but the regally bred six-time Group/Grade 1 winner who sired Grand National hero Rule The World surely warrants a bigger book.

Despite the wealth of talent in the British and Irish jumps ranks, breeders seem to have adopted the attitude of ‘if you can’t beat ‘em, join ‘em’ and sent mares across the English Channel to sires of those French imports who win so many prestigious races over hurdles and fences, or otherwise bought mares in foal to them.

Haras de Montaigu’s outstanding grey stallion Martaline - whose representatives include Agrapart, Dynaste and Very Wood - had ten foals born in Britain and Ireland this year, including Goldford Stud’s colt out of Daprika sold to Oak Tree Farm for €36,000 at Tattersalls Ireland this month and Upton Viva Stud’s filly out of Auteuil Grade 1 scorer Tidara Angel.

Haras d’Etreham linchpin Saint Des Saints, sire of Djakadam and damsire of Douvan, had five 2016 foals registered in the Return of Mares, while Haras de la Hetraie stallion Kapgarde, whose sons include Edgardo Sol and Garde La Victoire, had seven.

Three prescient breeders welcomed foals by Douvan’s sire Walk In The Park conceived during his last season in France before he was switched to Coolmore’s National Hunt ranks.

FIRST PUBLISHED 8:00PM, NOV 21 2016
This year Bolger appears to have latched onto an established but unheralded stallion who covered a grand total of zero mares in 2015, according to Weatherbys.

I've seen no sign of a Lance Armstrong - but the thought makes me feel sick Ger Lyons backs Bolger over anti-doping comments and calls for action Can one-of-a-kind Jim Bolger pull off more Group 1 heroics with Poetic Flare? 'Hardy' Poetic Flare primed for a fourth Group 1 assignment in 45 days at Ascot The one and only: Bolshoi Ballet must show why he was singled out for Derby One jockey, one trainer, one horse and one race to watch at Epsom on Saturday