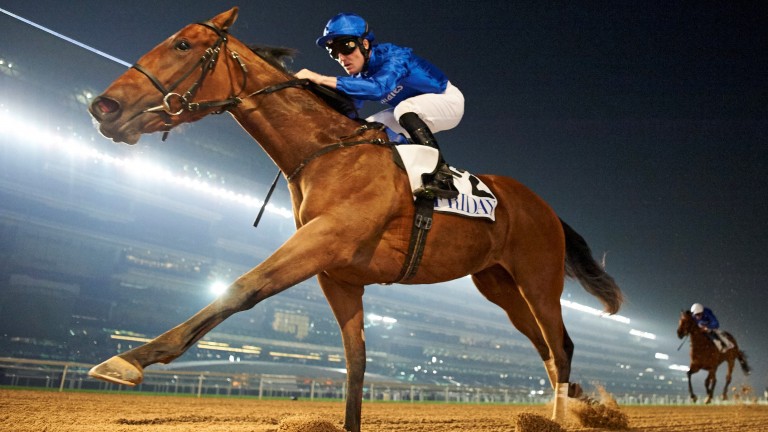 For any mare to produce a stakes winner is noteworthy, and to produce two is certainly something out of the ordinary. So hats off to Eastern Joy then, whose record now stands at a remarkable five stakes winners from as many runners, after Winter Lightning landed the UAE 1,000 Guineas at Meydan on Thursday.

That achievement capped a red letter day for the daughter of Dubai Destination, who is also responsible for Thunder Snow, who landed round two of the Group 2 Al Maktoum Challenge later on the Meydan card.

In landing the Listed prize, Winter Lightning emulated her older sister Ihtimal, a daughter of Shamardal and the first foal produced by Eastern Joy who went on to land the 2014 UAE Oaks by no fewer than ten lengths. Ihtimal had proved herself a crack two-year-old, having also landed the Group 2 May Hill Stakes and the Group 3 Sweet Solera Stakes.

Eastern Joy's second foal was Always Smile, a daughter of Cape Cross who raced nine times for Saeed Bin Suroor, who has overseen the racing careers of all of Eastern Joy's five runners. Always Smile landed the Listed Hambleton Stakes at York, and twice reached the podium in Group 1 company when placed behind Alice Springs in the Falmouth and the Sun Chariot Stakes.

First Victory is Eastern Joy's third foal, and despite racing only four times the daughter of Teofilo upheld the family's honour by running out a game winner of the 2015 Group 3 Oh So Sharp Stakes. 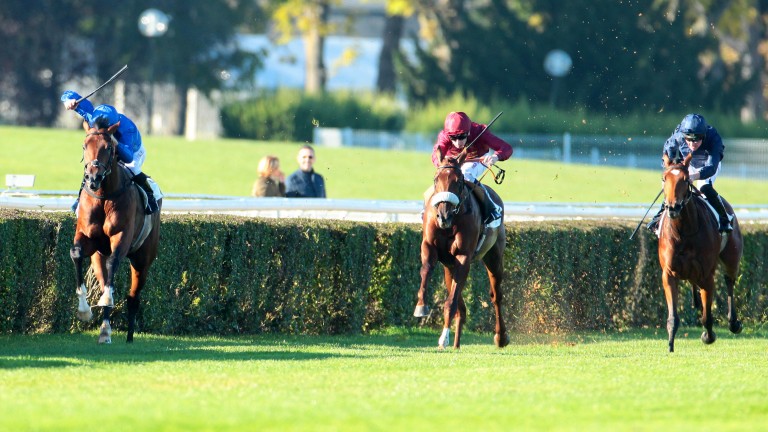 Thunder Snow overcame an infamous display in the Kentucky Derby to reach the frame in the Irish 2,000 Guineas and St James's Palace Stakes before bagging a second Group 1 in last year's Prix Jean Prat.

Eastern Joy's offspring have now won 18 races between them and amassed over £2.5 million in prize-money. And with Winter Lightning looking a most progressive filly, it is unlikely to be long before those already impressive stats get even better.

A Darley homebred, Eastern Joy raced just four times for Henri-Alex Pantall, winning over a mile at Vichy on debut before reaching the frame on her other three outings.

Despite that somewhat uninspiring race record, Eastern Joy is from a family that has served Sheikh Mohammed extremely well down the years.

She is out of his Sun Chariot Stakes winner Red Slippers, meaning that Eastern Joy is a half-sister to West Wind, another Darley homebred who became Pantall’s first Group 1 winner in the 2007 Prix de Diane.

In turn, Red Slippers was a half-sister to Oaks heroine Balanchine, one of the last Classic winners to be bred by the legendary Robert Sangster, whose impact was instrumental in establishing Godolphin as a major player in the bloodstock world.

Moreover, the exploits of Eastern Joy's progeny further emphasise the impact Dubai Destination has made as a broodmare sire, having already risen to prominence in this sphere having supplied the likes of Golden Horn, Postponed and Dutch Connection, among others.

With so many high-achieving daughters on the ground already, Eastern Joy is well on her way to blue hen status. What is more, she produced a colt by Dubawi in 2017 and was again covered by the master of Dalham Hall during the most recent covering season.

Given Eastern Joy's already exemplary record as a broodmare, and with the products of arguably her best coverings to date still in the pipeline, it would be a bold shout to say that she won't be experiencing the joy of six stakes in the not too distant future.

FIRST PUBLISHED 6:55PM, FEB 8 2018
Despite that somewhat uninspiring race record, Eastern Joy is from a family that has served Sheikh Mohammed extremely well down the years