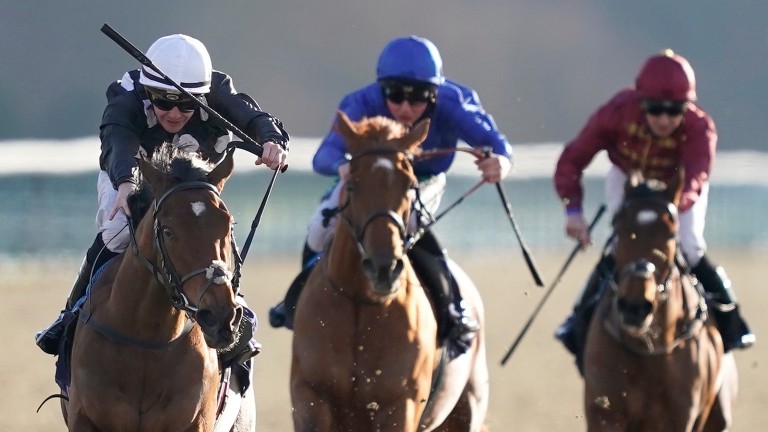 Well-bred three-year-old filly Anapurna made a marked improvement on her quiet debut to run out a five-length winner of a 1m2f fillies' maiden at Lingfield on Wednesday.

The John Gosden-trained daughter of Frankel ran green and made little impact when ninth of 13 at Wolverhampton last month but she put on a much more accomplished display second time out, racing prominently, taking the lead two furlongs from home and kicking clear to score by a wide margin.

There was still a glimpse of greenness, though, as Anapurna hung to her right as she reached the winning post.

Dawn Crusade, a Godolphin newcomer by Dawn Approach, got nearest despite also hanging, while Royal Family, another Frankel filly housed at Gosden's Clarehaven Stables, was third.

Anapurna is the second exciting new winner in Britain this week as Qatar Racing's four-year-old filly Tiger Eye, a half-sister to classy sprinters Caspian Prince and Spirit Quartz, landed a Wolverhampton novice stakes by two and a half lengths on Monday.

Frankel is commencing his seventh covering season at Banstead Manor Stud in Newmarket in the coming weeks, in the afterglow of his son Cracksman being crowned the joint-top performer of 2018 in the Longines World's Best Racehorse Rankings.

Anapurna carries the black silks with white spots of her illustrious breeder Meon Valley Stud. She is the fifth winner from as many runners out of the Montjeu mare Dash To The Top, winner of the Listed Hoppings Stakes and placed at the highest level in the Fillies' Mile and Yorkshire Oaks.

Her half-siblings include Dynasty (by Danehill Dancer), a short-head second in the Group 3 Tetrarch Stakes, and Very Dashing (Dansili), third in the Hoppings Stakes.

Milligram in turn was by Mill Reef out of one of Meon Valley Stud's legendary foundation mares One In A Million, bought on behalf of the then fledgling operation by Richard Galpin for 18,500gns as a yearling at Tattersalls and winner of the 1,000 Guineas and Coronation Stakes in 1979.

Anapurna adds to the growing list of useful horses inbred to Sadler's Wells – an almost inevitable development considering the ubiquity of the Coolmore colossus in European pedigrees.

She is inbred 3x3 through Frankel's sire Galileo and Dash To The Top's sire Montjeu, the two leading sire sons of Sadler's Wells.

The most notable example of successful inbreeding to Sadler's Wells is dual Prix de l'Arc de Triomphe victress Enable, who is 3x2.