Scat Daddy, Acclamation and Kyllachy all enjoy a productive meeting 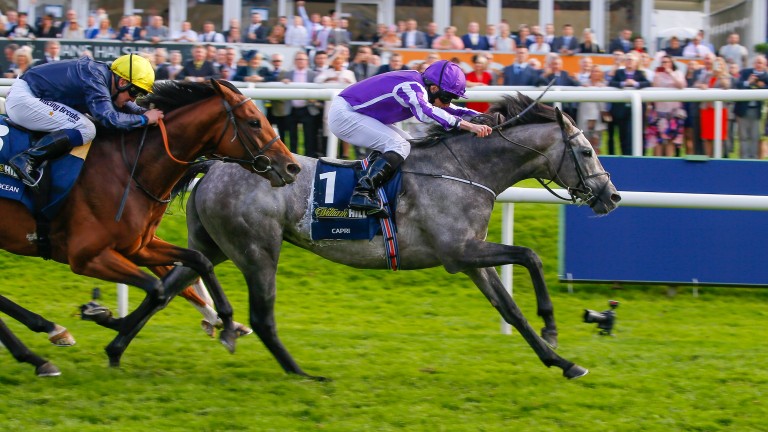 Capri: the first horse since the great Nijinsky to land both the Irish Derby and the St Leger
Mark Cranham
1 of 1
By James Thomas UPDATED 8:59PM, SEP 17 2017

Galileo may not have added a new top-level winner to the 68 already on his CV when Capri ran out a game winner of the St Leger, with the gallant grey having already landed the Irish Derby, but he did claim his seventh Classic of the 2017 campaign.

Capri becomes Galileo's third dual Classic winner this season, following on from Churchill and Winter, who both landed the English and Irish equivalents of their respective Guineas, while Order Of St George claimed the Irish St Leger. Capri also became Galileo's second St Leger winner after Sixties Icon, who landed the race in 2006, the year it was staged at York, and the first horse since Nijinsky to do the Irish Derby and St Leger double.

Galileo is rapidly approaching £10.5 million in progeny earnings in 2017 - almost four times the amount earned by the sons and daughters of his closest rival, Dubawi - and with a ninth leading sire title already on its way back to Coolmore, the only question is how long will his dominance last?

Here's hoping it is a good while longer yet, as just because we are so frequently reminded of Galileo's brilliance, does not mean it should be taken for granted.

Across the Atlantic the progeny of the final crop of the much-missed Scat Daddy have been the must-have item at the Keeneland September Yearling Sale. During the opening four sessions 42 of his sons and daughters changed hands at an average of $366,070, over ten times his covering fee during his final season at Coolmore's Ashford Stud, as his lots grossed $15,375,000, including two lots that fetched seven-figure sums.

It seemed all the major players wanted a slice of Scat Daddy, with the likes of Coolmore, Godolphin, Wesley Ward, the China Horse Club and Kerri Radcliffe all signing for his yearlings.

And at Doncaster on Saturday the two-year-old Seahenge gave a clear indication as to what all the fuss was about.

The colt became his sire's sixth British or Irish stakes winner in 2017 when landing a competitive renewal of the Group 2 Champagne Stakes. A tally of six stakes winner may be impressive enough, putting him as it does on an equal footing with War Front, Dansili and Sea The Stars, but he has achieved that result from only 24 runners. Those returns see him operating at a 25 per cent stakes winners-to-runners ratio in Britain and Ireland for 2017.

With the likes of Murillo, Special Purpose and Take Me With You waiting in the wings, there is every chance that Scat Daddy's stats will look even more impressive come the close of the current campaign. 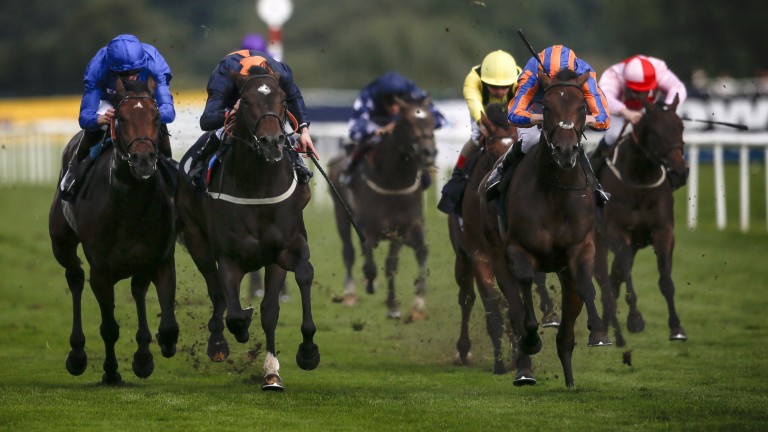 With Dark Angel having supplied the likes of Harry Angel, Mecca's Angel and Battaash, and Equiano having given us The Tin Man, Acclamation's reputation as a sire of sires is upwardly mobile to say the least.

And in Saturday's Group 2 Park Stakes winner Aclaim, the Rathbarry Stud stalwart has yet another son who will surely make plenty of appeal when he is called up for stud duty. The Martyn Meade-trained four-year-old has now won six of his 14 starts, including two Group 2s, as well as running a fast-finishing second in the Group 1 Prix Maurice de Gheest last month.

Moreover, his pedigree more than matches up to his race record, as he is the first foal out of the Listed-placed Aris, a close relation to Moyglare Stud Stakes and Irish 1,000 Guineas winner Again.

With a mouthwatering mix of in vogue genes, wherever and whenever Aclaim arrives at stud he looks certain to be in demand. 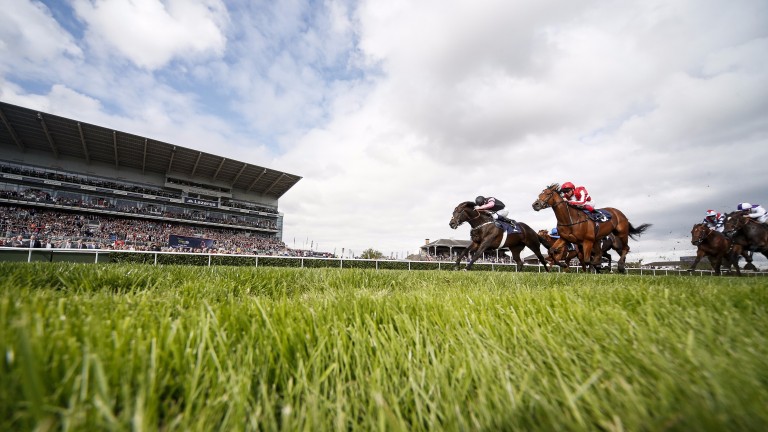 The Cheveley Park Stud stalwart Kyllachy may have been pensioned from covering duties, but his sons' and daughters' exploits at Doncaster look set to ensure he won't be away from the limelight just yet.

Kyllachy kicked off the St Leger festival with just about the easiest winner of the meeting, with Shadwell's 270,000gns Book 2 buy Shabaaby coasting to a seven-length success in the curtain-raising conditions stakes on Wednesday. The colt may not have met much in the way of opposition, but having run to a Racing Post Rating of 107 – the highest achieved by a two-year-old outside of Pattern company this year – a crack at stakes level looks on the cards before too long.

On Friday it was the turn of Heartache to shine, as the filly got her career right back on track with a decisive success in the Group 2 Flying Childers Stakes. She has now won three of her four career starts, including a commanding success in the Queen Mary Stakes, with her only defeat coming at the hands of subsequent Group 1 winner Unfortunately in the Prix Robert Papin. She was beaten just half a length on that occasion despite having suffered an injury leaving the stalls.

The Cheveley Park Stakes has been mooted as her next port of call, and should she prevail in that contest she would provide her sire with a fourth Group 1 winner, fittingly in a race that bears the name of the stud at which he carved out such a successful stallion career. 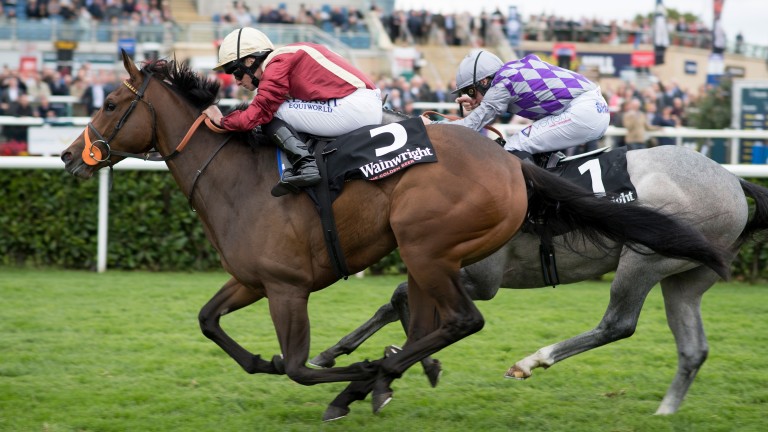 One of the most notable resurgences of the 2017 Flat season has come from Poet's Voice, whose fine year has been underpinned by a productive campaign from his juveniles. The Dalham Hall-based son of Dubawi has supplied an impressive 23 European two-year-old winners during the current season, a tally bettered only by the prolific Kodiac and his Tally-Ho Stud stablemate Zebedee. Moreover, he has supplied those 23 scorers at a taking 48 per cent winners-to-runners strike rate.

The hot spell his two-year-olds are going through was reaffirmed during the St Leger meeting, as two of his sons recorded commanding successes.

First came Nobleman's Nest, who bounced back from a disappointing display in the Gimcrack Stakes to run away with a well-contested Class 2 nursery on Wednesday's card. The Simon Crisford-trained colt boasts some flashy entries, namely the Dewhurst Stakes and next year's Derby, and on the evidence of his latest display it won't be long before he's seen in Pattern company again.

Then on Friday came Blue Laureate, who defied long odds to break his maiden by four and a half lengths. The Clive Cox-trained gelding may not have the big-race entries of Nobleman's Nest, but he is out of a daughter of Cheveley Park Stakes winner Blue Duster, so he seems likely to continue on his upward trajectory for a good while yet. 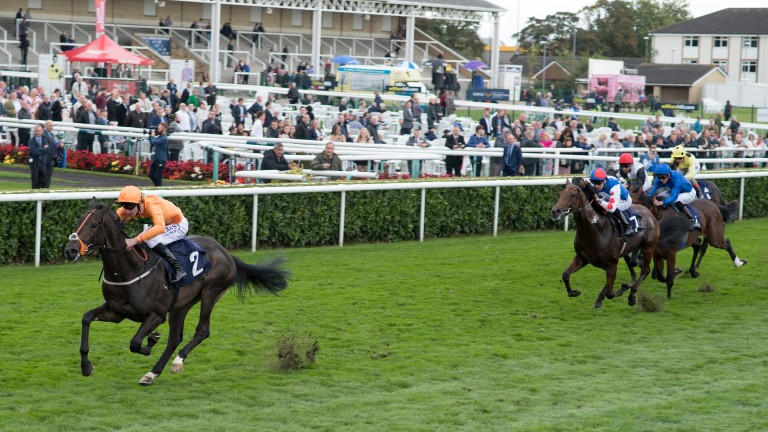 Cheveley Park Stud linchpin Kyllachy retired at the age of 19

FIRST PUBLISHED 6:07PM, SEP 17 2017
With a mouthwatering mix of in vogue genes, wherever and whenever Aclaim arrives at stud he looks certain to be in demand