Five first-season stallions who made their presence felt 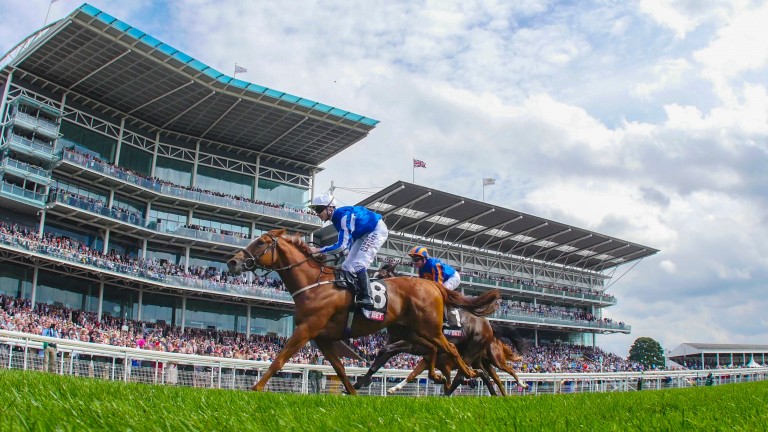 Sir Prancealot may have run away with this year's British and Irish first-season sires' title by prize-money and number of winners, having supplied a grand total of 28 successful sons and daughters at a healthy strike-rate of 40 per cent, but which other stallions left their mark on the 2016 season?

Has any sire ever headed into his freshman season with so many hopes, so much expectation and such a level of hype surrounding him? Probably not. Has Frankel delivered? Undoubtedly.

Of course there have been naysayers, with reports that he does not stamp his stock or that his progeny can be highly strung.

But the facts are that he finishes 2016 with 15 of his 29 British and Irish runners having won, among that number four Pattern race winners; that eight of his offspring have earned a Racing Post Rating (RPR) of 100 or higher; and that he capped the year by siring a Group 1 winner in Japan, one of only two European first-season sires to record a top-level success in 2016 along with Helmet.

It is true that he had arguably the strongest first book of mares ever assembled for any stallion, but there can be little question that he earned the right to that on the track. And exceptional book or not, his progeny still had to prove they could run - and run they have.

Frankel himself progressed with age, as you would expect from a son of the all-conquering Galileo, and there is every reason to think plenty of his runners will do the same.

In his races Frankel’s dominance came to the fore within a matter of seconds, but successful stallion careers are crafted over years, so clearly it would be folly to proclaim him the second coming within the stallion ranks just yet. But he has made a fantastic start and, as Tony Morris rightly points out in this year’s Bloodstock Review, it may just be class that he is imparting, rather than simply passing on precocity.

If it is true what they say, that class is indeed permanent, there is no telling how far Frankel is capable of going as a sire.

Requinto a real gift to breeders

Requinto, one of three representatives of Coolmore on this year’s first-season sires list, stood at a fee of €5,000 in 2013 when his first crop were conceived, and subsequently had just 25 runners in Britain and Ireland. But 14 of those managed to win at least one race for a strike-rate of 56 per cent, the highest of those sires to have had more than two runners - even bettering the mighty Frankel.

It is not just a case of a small sample size returning a flattering set of statistics, either, as among that number are some highly promising types, including the unbeaten Trevanna and unexposed Mojito.

The point is reinforced by the ratings his progeny have run to, with his runners' average RPR of 72 the joint-second highest and median RPR of 74 second only to Frankel.

Requinto may not have sired a stakes winner but Broken Stones, a 200,000gns breeze-up buy sold to Hong Kong midway through the season, looked nailed on to land a Pattern event having run to an RPR of 107 when he finished a length-and-a-half third to Mehmas in the July Stakes.

The son of Dansili remains on a fee of just €5,000 in 2017, which looks a real gift to breeders given his promise to date.

If there was an in-running description of Sepoy’s debut season with runners it would read something along the lines of: slowly away, good headway from halfway, closed all the way to the line, never nearer.

The son of Elusive Quality, who has stood his four northern hemisphere covering seasons at Dalham Hall at a fee of £15,000, finished the season with a flurry of winners to take his tally for the year to 19 at a winners-to-runners strike-rate of 40 per cent, a figure that saw him finish second in the first-season sires’ table in Britain and Ireland by number of winners.

Sepoy also supplied a pair of Stakes winners in Baileys Showgirl, who struck in a Listed event at Chantilly in July, and Group 3 Prestige Stakes scorer Kilmah, both of whom are trained by Mark Johnston.

He is also the sire of Dabyah, the John Gosden-trained filly who finished a length third to Wuheida in the Prix Marcel Boussac and in so doing achieved an RPR of 111, the joint-fourth highest achieved by the progeny of a freshman sire in Europe in 2016.

A stakes winner is the feather in the cap of a freshman sire, so for Coolmore’s Power to have supplied four of them is noteworthy. In fact only Galileo, Frankel, Kodiac and Dark Angel sired more two-year-old stakes winners in 2016.

He also supplied five progeny with a peak RPR of 100 or more, capped by Peace Envoy who achieved a rating of 113 when beaten just a length into third by the hugely talented Scat Daddy filly Lady Aurelia in the Prix Morny.

Peace Envoy proved to be a fine advert for Power; having made a winning debut in April the colt went on to run a further seven times, winning a Listed event at Naas and the Group 3 Anglesey Stakes along the way. He is joined by the likes of Horris Hill Stakes winner Pleaseletmewin, who fetched 450,000gns when sold to race in Qatar, and Listed scorers Biz Power and Cristal Fizz.

With Oasis Dream’s profile as a sire of sires looking set to rise in the coming seasons it would be no surprise to see Power remain at the forefront of this emergence.

With so much attention lavished on Frankel’s first runners this year there were a number of freshman sires who rather slipped under the radar despite producing promising results, and Cheveley Park’s Mayson fits right into that category.

His 44 British and Irish runners contained 15 winners and returned an average RPR of 72 - which sees him finish joint-second in the sires’ table by average RPR - and a respectable median RPR of 68. He also sired a trio of stakes-winning horses in the shape of Listed winners Global Applause, Private Matter and Rosie Briar.

Mayson himself continued to progress right the way through his career until he landed the July Cup as a four-year-old. With plenty of his stock looking of the same mould there should be a good deal for those breeders who have sent a mare to the son of Invincible Spirit to look forward to in 2017 and beyond.

Helmet: the only freshman besides Frankel to supply a Group 1 winner with Thunder Snow, who landed the Criterium International and achieved the highest RPR recorded by the progeny of a first-season sire in 2016 on 119.

Dragon Pulse: another who supplied a steady stream of winners that eventually totalled 16 from 38 runners, for a strike-rate of 42 per cent. His best performer by RPRs was Aethos, a nine-length winner of an Italian Group 3 last month.

Delegator: who, from fairly modest opportunities, managed to sire nine successful offspring at a strike-rate of 30 per cent, including the impressive Group 3 winner Delectation. On the back of such a promising start his untimely death is a real loss to British breeding.

FIRST PUBLISHED 12:27PM, DEC 21 2016
And exceptional book or not, his progeny still had to prove they could run - and run they have