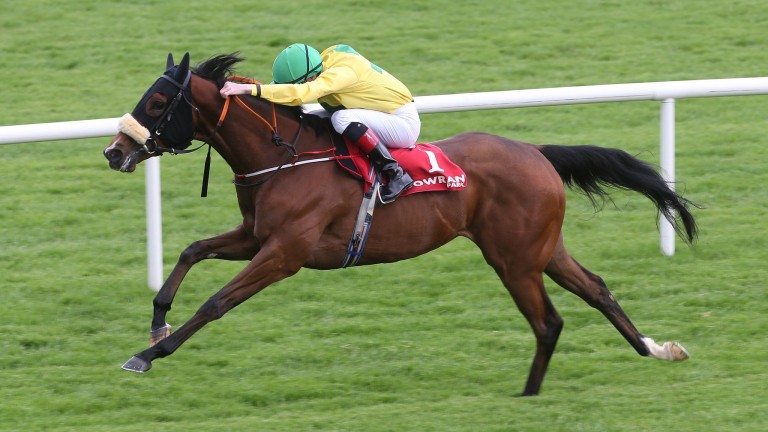 The British-bred Flintshire, having been switched to the yard of Chad Brown for his final season of racing last year, got the new partnership off to the perfect start with a game win in the 1m2f Grade 1 Manhattan Stakes for four-year-olds and upwards.

Three more European-bred runners will be bidding to emulate the five-time Group/Grade 1 winner when they line up among the nine runners for this year's renewal at Belmont on Saturday.

That trio consists of entires Wake Forest and Time Test, and the gelding Potemkin.

In what looks a rather open race, the most fancied of those is the Brown-trained Dubawi horse Time Test, who began his racing career in the care of Roger Charlton, for whom he won two Group 2 races from a mile to 1m2½f.

Like Flintshire a Juddmonte homebred, the five-year-old Time Test is the third foal out of the Dansili mare Passage Of Time, winner of the 2006 Criterium de Saint-Cloud as a juvenile and third in the 2007 Prix Vermeille. 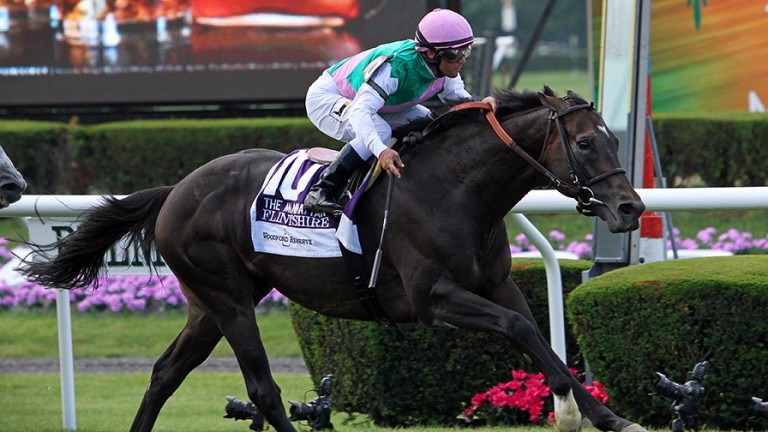 Flintshire: stamped his authority on the 2016 Manhattan Stakes at Belmont
EquiSport Photos/Jessie Holmes

One of a remarkable nine winners from ten runners out of the winning Sadler's Wells mare Clepsydra, Passage Of Time is a sister to the King Edward VII Stakes scorer Father Time and Listed winner Continuum, and also a half-sister to the Falmouth Stakes winner Timepiece.

Dubawi has already supplied a top-flight winner in the US this year with the game Gulfstream Park Turf Handicap winner Almanaar.

Both Wake Forest and Potemkin were bred in Germany by Gestut Fahrhof.

Wake Forest, another to be trained by Brown, started off with Andreas Wohler, winning two Group 3 races over 1m2f.

The seven-year-old son of Sir Percy landed a Grade 1 on only his second start for Brown, with a win in the Man O' War Stakes over an extra furlong at Belmont last year, and got this year off to a good start by winning the Grade 2 Mac Diarmida Stakes at Gulfstream Park.

Wake Forest is the best runner to date by Racing Post Ratings for the 2006 Derby winner Sir Percy, who stands at Lanwades Stud at a fee of £7,000. He is out of the Listed-place Lomitas mare Wurfspiel.

From a prolific German family, Wurfspiel is a half-sister to the German St Leger winner Wurftaube, who went on produce German Derby winner Waldpark and Waldmark, dam of 2011 St Leger winner Masked Marvel, as well as Waldlerche, the dam of Waldgeist, who like Passage of Time was a winner of the Criterium de Saint-Cloud.

Another winner of that race, the champion German two-year-old filly Paita, appears in the pedigree of Potemkin, as half-sister to his dam Praia.

The six-year-old New Approach horse has already opened his account at the highest level thanks to a Group 1 win in Italy for Wohler, who continues to train him, and he will be ridden by Joel Rosario.

Potemkin earned his highest Racing Post Rating (RPR) of 114, however, for his win in the Group 2 Prix Dollar at Chantilly.

Should he win, it would provide a first top-flight winner in the US for his sire.

EUROPEAN-BRED RUNNERS AT BELMONT ON SATURDAY

Earlier on the same card is the mile Grade 1 Just A Game Stakes for four-year-old fillies and mares and upwards, in which the Irish-bred mare Roca Rojo - who is expected to be favourite - and the British-bred mare Prize Exhibit line up.

Roca Rojo, a five-year-old daughter of Strategic Prince, began her racing career with Adrian McGuinness in Ireland, winning a maiden and fillies race on her only two starts for that trainer at three, before her transfer to Chad Brown.

She is familiar with this course having won the 1m½f Grade 3 Athenia Stakes, and comes into the race in good form having won the mile Grade 2 Churchill Distaff Turf Mile Stakes last month.

Bred by Tommy Murphy, Roca Rojo is a half-sister to Beauty Flame, a Group 2 winner in Hong Kong who was also second in three races at the highest level there, out of the Orpen mare Lucy Diamonds, an unplaced hurdler.

Lucy Diamonds is out of a winning daughter of the Moyglare Stud Stakes third Nazwa, who produced a speedier type in the Queen Mary Stakes third Saintly Lass.

Strategic Prince, winner of the Vintage and July Stakes at two, has supplied only one other Group 1 winner to date in La Collina, winner of 2013 Matron Stakes on Irish Champions Weekend.

Prize Exhibit, on the other hand, was originally trained by Jamie Osborne, for whom she won a maiden and a novice stakes at two, both over six furlongs, before her transfer to the yard of James Cassidy.

She continued to improve, and earned a RPR of 110 for winning the 6½f Grade 2 Monrovia Stakes at Santa Anita in January last year. However, she would appear to run best in winter, as her last win came in the mile Grade 3 Megahertz Stakes in January of this year.

FIRST PUBLISHED 2:35PM, JUN 9 2017
Both Wake Forest and Potemkin were bred in Germany by Gestut Fahrhof