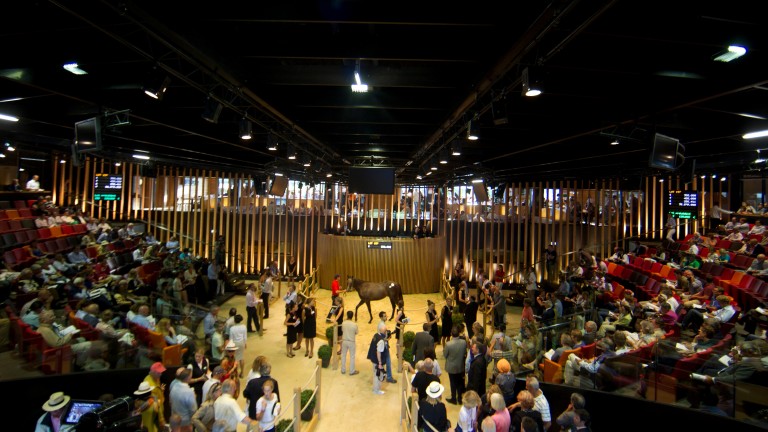 Three black-type fillies, a Frankel foal half-sister to a Group winner and a mare in foal to a highly sought after stallion have been added to the Arqana Breeding Stock Sale catalogue as wildcard entries.

These five high-quality lots will go through the Arqana ring on Saturday, December 3 in Deauville.

Soudanaise (Lot 130) is a daughter of Peintre Celebre consigned by Haras du Bois Roussel and is a sister to Group 1 winner Sudan. She will be offered in foal to champion sprinter Muhaarar, who retired to stud this year and covered a restricted book at the price of £30,000.

Only two mares in foal to the triple Group 1 winner feature in the catalogue, the second being Sun Bittern (175), dam of Group 1 Prix Maurice de Gheest winner Signs Of Blessing.

Laseen (140) finished runner-up in the Listed Prix Panacée at Toulouse on her penultimate outing, this five-year-old mare by Dylan Thomas is from the family of the smart Usherette and dual Group 1 winner Vespone.

Stone Roses (150) is a winner of the Listed Prix Solitude at Saint Cloud last year. A daughter of Rip Van Winkle, she is from the family of the superb Contibuter, a multiple Group 1 winner in Australia.

An April foal by Frankel and out of the Listed winner Ascot Family (170) is consigned by Haras des Capucines. This makes her a half-sister to the talented juvenile Family One, winner of the Group 2 Prix Robert Papin and Group 3 Prix du Bois and runner-up to Dabirsim in the Group 1 Prix Morny. She also hails from the family of champion sprinter Lethal Force and Classic heroine Flotilla.

Saimaa (180) is a three-year-old filly by Zoffany and trained by Henri-François Devin for Chryss O'Reilly and several partners. A very consistent performer, she placed third in a Listed race at Saint Cloud earlier this month. She is from the same family as Stone Roses and Contributor.

Finally, lot 100 will be Arcadia, which was omitted by accident from the initial catalogue. This four-year-old daughter of Lope de Vega won three times for trainer Francis-Henri Graffard and hails from the Aga Khan family of Ridasiyna, Kinnaird and Ivawood.

FIRST PUBLISHED 2:56PM, NOV 23 2016
These five high-quality lots will go through the Arqana ring on Saturday, December 3 in Deauville