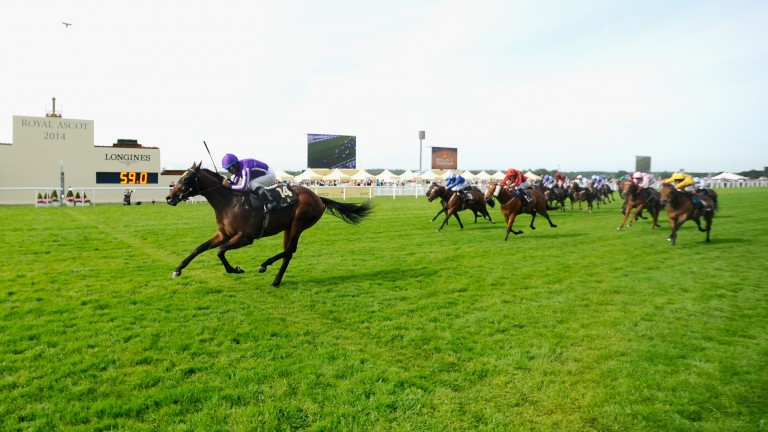 Breeders' Cup Juvenile Turf and Windsor Castle winner Hootenanny became the latest first-crop sire to be provided with a winner when Esken Rose front ran to a cosy success at Pontefract on Thursday.

Bred by J Adock & Hume Wornall, the filly was picked up by Lauren Robson for $4,000 from Fasig-Tipton's October Yearling Sale and then to Hambleton Racing, Kevin Ryan and Stephen Hillen for  £38,000 at the Tattersalls Ireland Goresbridge Breeze-Up Sale.

She is the first foal out of American mile winner Eskenforandreya, a daughter of runway Wood Memorial Stakes scorer Eskendereya and a half-sister to the stakes-winning South Bend.

Hootenanny was a top-class performer for Welsey Ward, landing the 2014 Windsor Castle Stakes on his third start before finishing second in the Prix Morny and then winning the Juvenile Turf in Santa Anita.

The son of Quality Road won five of his 16 races for Ward and the Coolmore partners at two, three and four. He was also sent off 9-4 favourite for the Commonwealth Cup in 2015 but was only 11th behind Muhaarar.

Bred by Barronstown Stud, Hootenanny sold to Winding Oaks Farm for $120,000 at the Keeneland Breeding Stock Sale before being picked up by Cromwell Bloodstock for $75,000 at the following year's September Yearling Sale.

Having originally joined Doug and Karen Arnold's Buck Pond Farm in Kentucky for the 2018 breeding season, he is now ensconced at his trainer's Ward Ranch, where he stands for a private fee.

The nine-year-old has 28 first-crop two-year-olds to represent him this year.

He is the second foal out of the Hennessy mare More Hennessy, a close relation to Grade 1 winner Cat Moves, and from the family of top-level winners Ascend and Dance Teacher.

Middleham Park out for more success from Osarus with €50,000 Gutaifan colt