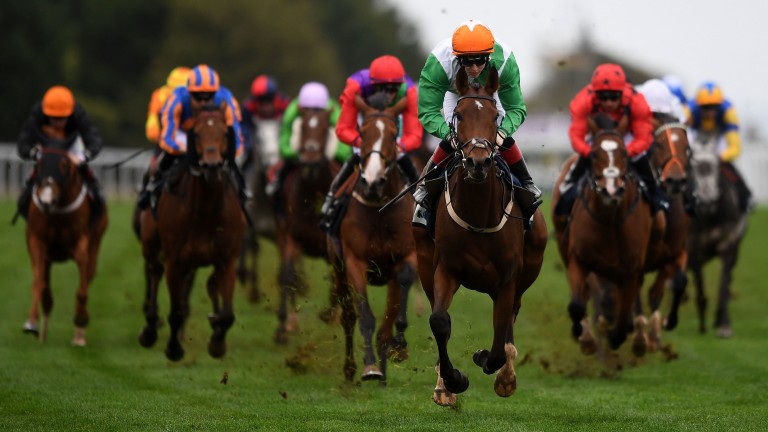 True Self (nearest) coasts clear of her rivals to win the Listed Beckford Stakes at Bath
Harry Trump
1 of 1
By Ollie O'Donoghue UPDATED 5:17PM, OCT 17 2018

Oscar, one of the first names to spring to mind when thinking of jumps sires, achieved a notable first on Wednesday when his five-year-old daughter True Self coasted clear of her rivals to win the Listed Beckford Stakes at Bath and become his first stakes winner on the Flat.

True Self traveled smoothly into contention before asserting her lead in the final two furlongs to win by a comfortable three lengths.

Watch True Self win the Beckford Stakes in emphatic style

Oscar, a 24-year-old son of Sadler's Wells, is one of the most highly regarded jumps sires, with his son Lord Windermere having won the 2014 Cheltenham Gold Cup.

Lord Windermere, who also won the RSA Chase, is among six Grade 1 winners at the Cheltenham Festival for Oscar, along with Champion Hurdle hero Rock On Ruby, At Fishers Cross, Big Zeb, O'Faolains Boy and Peddlers Cross.

His sons Oscar Time and Teaforthree also reached the podium in the Grand National.

Oscar was second to Peintre Celebre in the 1997 Prix du Jockey Club and was retired to Grange Stud the following year.

Among Oscar's limited number of other Flat runners is Rolling Maul - a talented hurdler who won three races on the level last summer.

The first two editions of the Beckford Stakes, which was established in 2016, were won by daughters of Azamour and Frankel.

FIRST PUBLISHED 5:03PM, OCT 17 2018
Oscar was second to Peintre Celebre in the 1997 Prix du Jockey Club and was retired to Grange Stud the following year