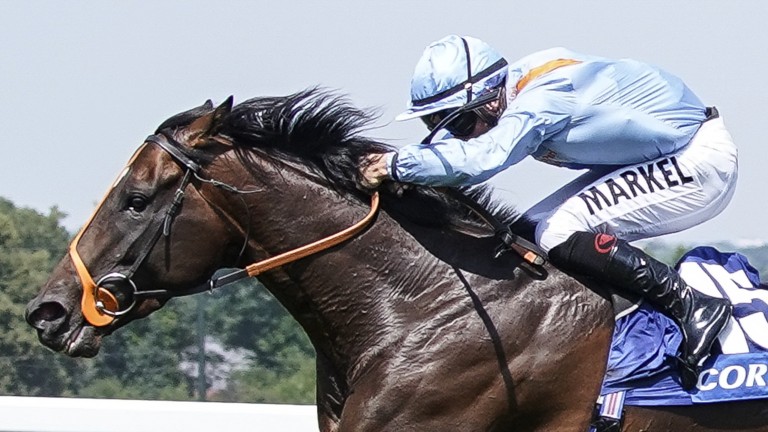 The spirit of entente cordiale flourished at Newbury on Thursday with Boitron – a first horse representing the partnership of leading British syndicators Middleham Park Racing and prominent French owner Gerard Augustin-Normand – was an impressive winner of a 6f novice auction stakes at Newbury on debut.

The Richard Hannon-trained colt, bought for €45,000 at the Osarus yearling sale in France last September, is a Le Havre brother to Mezidon, a six-time winner in France. His dam is Belliflore, a Group 3-placed daughter of Verglas.

Though the association between the owners is new, the love affair between Middleham Park Racing and the sire Le Havre is well established.

The owners also have the sire's offspring Tigre Du Terre, an impressive winner of the valuable Coral Challenge Handicap at Sandown on Saturday, and Star Of Southwold, a wide-margin novice stakes scorer at Newmarket in April.

Both Tigre Du Terre and Star Of Southwold are trained by Hannon, as are the syndicate's two juvenile fillies by Le Havre – Embrace The Moment, a promising fourth on debut at Newbury last month, and the as-yet unraced Ventura Island.

Middleham Park Racing partner and director of racing Tim Palin explained the genesis of the partnership with Augustin-Normand, who owns the Prix du Jockey Club winner Le Havre and has strongly supported his breeding career, co-owning the dual Classic-winning daughters Avenir Certain and La Cressonniere among many others by the sire.

“We love our Le Havres, they've done us proud, so any we see at the sales we pay extra special attention to and this fellow [Boitron] was no exception,” he said.

“We were looking at the horse and so was Nicolas de Watrigant of Mandore, on behalf of Mr Augustin-Normand, so we decided rather than bid against each other we'd bid together and share the horse.

“The arrangement is that when he races in Britain we'll race in our silks and if he races in France he'll carry Mr Augustin-Normand's silks.”

Regarding the progressive Tigre Du Terre, bought by Mandore and Peter and Ross Doyle for €55,000 at Osarus in 2016, Palin added: “We always thought he was a Group horse after he won at Ascot on his debut last year. He's a tall horse who's taken some time to strengthen up.

“We made the mistake of thinking he'd want a mile and a quarter, so we put him away and started him off this year behind Crossed Baton over that distance at Kempton. We couldn't believe he got beaten, but obviously we didn't know how good the winner would be.

“He probably doesn't quite get a mile and a quarter and is more fully effective at a mile.

“Obviously we'll go for the Golden Mile at Glorious Goodwood [on August 3] as the handicapper put him up to 105 after Saturday but he has the chance to run off 101 in that race. We've got to go for it.

“Then, depending on how he runs there, we'll have to start looking at Listed or Group 3 races with him.”

Embrace The Moment looked the winner at Newbury until fading into fourth in the final stages of the 7f heat and Palin reported she was due to run this week until being ruled out due to a dirty scope – but that she “should go close next time”.

He added that Ventura Island “is going to be a typical Le Havre, a backend seven-furlong two-year-old who should be an August or September debutante”.

Middleham Park Racing are not the only owners enjoying success with progeny of Le Havre, as the stallion – who stands at Haras de Montfort et Preaux in Normandy – has also been represented this year by Australian Group 3 winner Auvray and Listed scorers Aubevoye, Mascha and Victorine.

FIRST PUBLISHED 8:17PM, JUL 12 2018
We love our Le Havres, they've done us proud, so any we see at the sales we pay extra special attention to