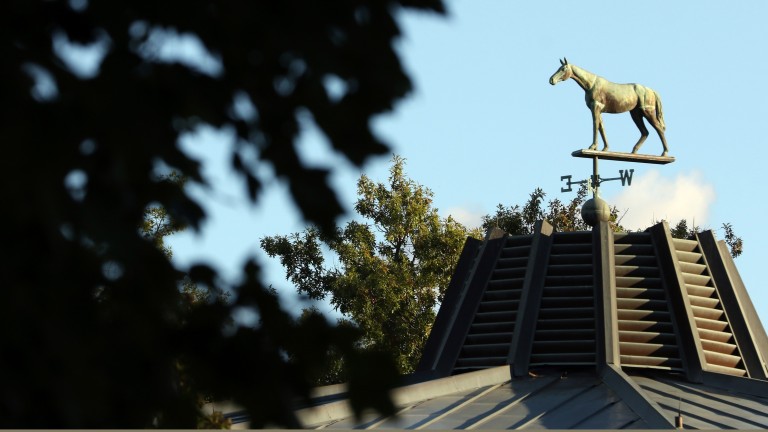 The weather vane on a clear morning at Keeneland
Keeneland
1 of 1
By Eric Mitchell of BloodHorse 6:13PM, NOV 7 2018

Darley's Nyquist has not had a large representation of his first-crop weanlings at the Keeneland November Breeding Stock Sale but they're making noise in the marketplace.

A $600,000 chestnut son out of a half-sister to champion Lady Eli was the second highest-priced horse to sell during the sale's second session on Tuesday. He was purchased by OXO Equine owner Larry Best, who said Nyquist is an attractive young stallion because he is by Uncle Mo and he won the Kentucky Derby.

Darren Fox, sales manager for the Darley America stallion division, said the colt was a standout, and his price was a particular thrill.

"He was one we had high hopes for, and the pedigree speaks for itself," Fox said.

Darley has first-crop weanlings from two sires at the sale - Nyquist, who was 2015 Eclipse champion two-year-old colt and only the second colt to sweep both the Breeders' Cup Juvenile and the Kentucky Derby, and Frosted, who won or placed in six Grade 1 stakes, earned $3,972,800, and set a stakes record in the Metropolitan Handicap, winning by 14 and a quarter lengths.

Fox said breeders have been happy with the foals by both. As for Nyquist, he said the foals look a lot like him.

"They are well-made - a lot of solid bays that are straightforward, very correct, and a nice two-turn length of body," Fox said. "They have great balance, they are athletic, and have great minds. They have the profile that they look good now but will keep getting better. I think they will make really nice yearlings."

About Frosted, Fox said his first weanlings seem a little more forward than the Nyquist foals.

"Frosted is an absolute specimen and very strong," he said. "The foals are very straightforward. A lot of hip is what he is getting, with a powerful shoulder.

"He rolled off the van after the Breeders' Cup and almost showed up some of our other stallions as a horse straight out of training. He was four but still, to come off a campaign and look show-ready, that is a rarity.

"That tells you about the conditioning he carried in his races and the physique that he has. They have sharp, attractive heads and good attitudes as well. We are getting rave reviews on both stallions."

Nyquist, with nine weanlings cataloged, does not have as large a representation at Keeneland as Frosted or some other first-crop sires. Frosted had 21 cataloged, WinStar's Exaggerator had 25, Taylor Made Stallions' California Chrome had 14, Claiborne Farm's Runhappy had 21, and Hill 'n' Dale Farms' Flintshire had 25.

"What has been entered has been nice, but there are a lot of very nice horses being retained for the yearling season," Fox said. "I don't know that there is rhyme or reason. I think when the dust settles, (the) numbers will not be that different (between Nyquist and Frosted)."

"Both were booked full in year two and look like they will be for year three," Fox said. "A stallion has to be getting the results for that to happen. Breeders are coming back. It has been a nice start."

FIRST PUBLISHED 6:13PM, NOV 7 2018
Both were booked full in year two and look like they will be for year three. A stallion has to be getting the results for that to happen