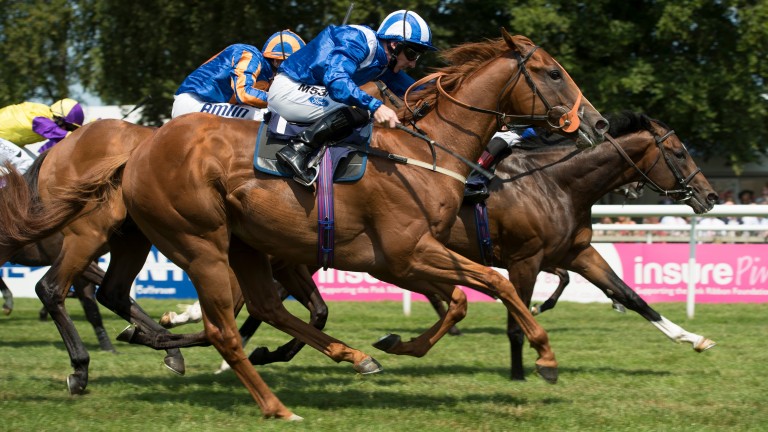 Anjaal on his way to winning the July Stakes at Newmarket
Edward Whitaker
1 of 1
By Ollie O'Donoghue 5:38PM, JAN 26 2017

Anjaal, winner of the Group 2 July Stakes at two, has his first foals on the ground.

Mrs Beeton gave birth to a filly on January 11 at Pier House Stud in County Kildare. The foal is from the family of Sing Softly, winner of the Group 3 Lancashire Oaks.

Ger Morrin said: "Mrs Beeton has produced a very good foal by Anjaal. She's physically very similar to her father being strong and correct with a nice length of rein."

Pearly Brooks had a colt on January 16 at Esker Lodge Stud. Pearly Brooks is a sister to Group 1 Phoenix Stakes victor Pips Pride.

Gerry Flannery said: "We're delighted with our Anjaal colt - it's the best foal the mare has ever produced - with great shape and good bone."

Danza Nera had a colt foal on January 25 at Vinesgrove Stud in County Kilkenny.

Billy McEnery said: "We couldn't be happier with our Anjaal colt - this is a young and exciting family - he is a half brother to the Listed-placed Jalapeno."

Anjaal was trained by Richard Hannon to win a maiden and the Group 2 July Stakes at two. He continued at three finishing a close third to Es Que Love in the Group 2 Lennox Stakes at Goodwood.

He is standing for his second season at an unchanged fee of €5,000 at Rathasker Stud.

Madeline Burns, of Rathasker Stud, said: "We're extremely pleased to hear great reports from clients on their first Anjaal foals - a number of his first foals have been born to breeding right holders such as the Morrins, the McEnerys, the Flannerys, and the Hodges, all who have given him fantastic support.

"Group 2 July Stakes winner Anjaal covered over 190 mares in 2016 and a large part of his appeal is as a speed outcross for Danehill/Danzig line mares."