Transvaal Sky gave birth to a colt on Wednesday 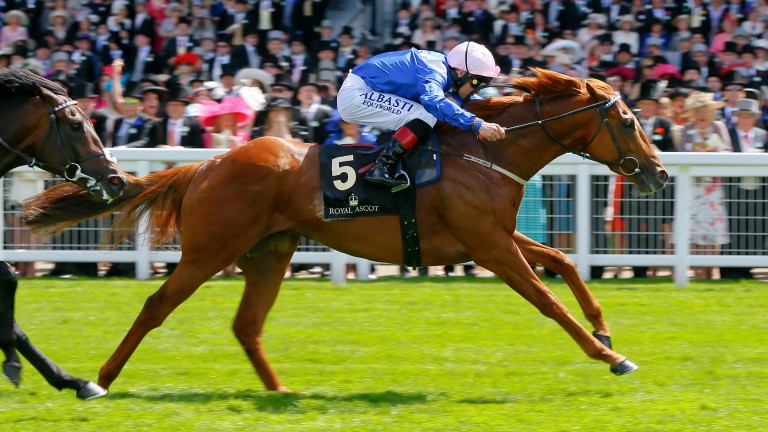 Mustajeeb, the most recent recruit to Simon Sweeting's Overbury Stud having retired to stud in 2016, has his first foal on the ground in the shape of a colt out of juvenile winner Transvaal Sky.

Simon Nicholson's Avonbridge mare Transvaal Sky, a winner at two when in training with Tom Dascombe, foaled a chesnut colt on Wednesday.

"He's very like his sire and was up and sucking within an hour," said Sweeting. "He's a tidy, attractive, good-bodied colt and I'm really pleased with him."

A treble Group winner for Hamdan Al Maktoum and Dermot Weld, Mustajeeb raced from two to four, winning a 7f maiden at the Galway festival on his second start at two.

He had five starts at three, finishing third to Kingman in the Irish 2,000 Guineas, before winning the Group 3 Jersey Stakes at Royal Ascot. He was then second to Bow Creek in the Group 2 Boomerang Mile on Irish Champions' Weekend.

Mustajeeb returned at four, winning the Group 2 Greenlands Stakes at the Curragh by a length from Maarek.

Mustajeeb made a return trip to Newmarket on Thursday to take part again in the Thoroughbred Breeders' Association stallion parade at Tattersalls.

He is standing the upcoming breeding season at a fee of £4,000.