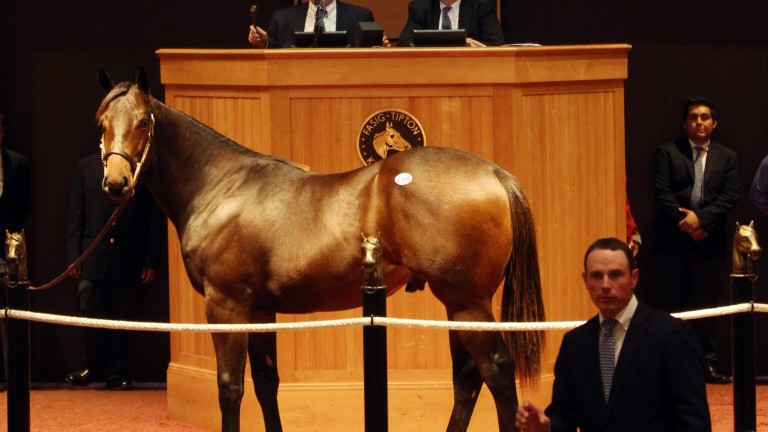 This Orb colt is from the family of champion US filly Songbird
Fasig-Tipton Photo
1 of 1
By Ron Mitchell of Blood-Horse 2:57PM, NOV 1 2016

Topped by an Orb colt from the family of champion Songbird, the second session of Fasig-Tipton's October Yearling Sale on Tuesday saw solid across-the-board trade, with downturns in average and median prices.

One area of improvement was the RNA rate with 27 per cent buy-backs, compared with a 29 per cent rate last year.

Despite the declines, Fasig-Tipton president and chief executive Boyd Browning Jr. said the day's trade had a good vibe and there was a general consensus the day's offerings were the lightest at the upper end among the three sessions, a consequence of how the catalogue - organised alphabetically by mare name - fell.

"All in all I thought trade was pretty consistent and very similar today to Monday and there are some nice horses tomorrow," Browning said, noting that sales have an ebb and flow that can affect the overall figures. "Every sale is different and it depends on who might show up one day and leave the next day or come for just one day. In horse sales there are wide variations from day to day.

"It's a reasonable market and it's a fair market."

Browning said he believed the lower buy-back rate is important to breeders and consignors.

"Virtually every sales company would tell you at the end of the day they want to get horses sold," Browning said. "The people who are transacting business with you are wanting to turn their product into cash. Getting the horses sold - maybe not be for as much as they want or hoped for - but they no longer are going to feed or take care of those horses and are waiting for a check that is going to come from us in 30 days.

"I would always lean trying to improve the buy-back rate."

Topping the session at $300,000 was hip 759, from the first-crop of Claiborne Farm stallion Orb and out of the unraced Medaglia D'Oro mare Zealous Gold. Consigned by Taylor Made Sales Agency, the colt was bought by trainer Tony Dutrow.

Bo Hunt signed the sales on behalf of Team D and Dutrow. Hunt said he was on the phone with Dutrow during the bidding and that was as high as he was likely to go.

"He was just very happy to get the horse bought," Hunt said. "The Orbs that I've seen have been nice horses. I think he's been well represented at the sale and hopefully they go forward from there.

"I think it is very competitive on the top end," Hunt said of the market. "That's what people want."

Mark Taylor, sales director for Taylor Made Sales Agency, said the colt was targeted for the October Sale rather than an August or September auction because he was a May 23 foal and would benefit from the extra time.

"Mother Nature does more to bring these horses along than anything we can do in prepping them," Taylor said. "He was much more mature, filled out, and physically ready than he would have been a month ago.

"He kind of had the whole package, which is what is what it takes in this market. That was good for buyer and seller."

Taylor said the better horses in Taylor Made's consignment at the Fasig-Tipton Sale had exceeded expectations.

"Our horses that have sold the best are bringing 50-100% more than I appraised them for," Taylor said. "With the rest of them you have to be very careful."

The day's second-highest price of $290,000 was paid by Mike Ryan, agent for a client he declined to name, for a colt sired by WinStar stallion Gemologist, the second-leading first-crop sire.

"He's resembles his sire a lot," Ryan said. "They're (Gemologist foals) well-grown horses that will stretch, but they've got plenty of pace. They showed it at the two-year-old sales and they're showing it now at the racetrack, very impressive horses. It was no genius picking him out. He was just a really good colt and you have to pay for those kind. I knew we'd have to stretch for him.

The sale concludes on Wednesday.

FIRST PUBLISHED 8:01PM, OCT 26 2016
I think he's been well represented at the sale and hopefully they go forward from there