Bloodstock Latest STARS OF THE FUTURE 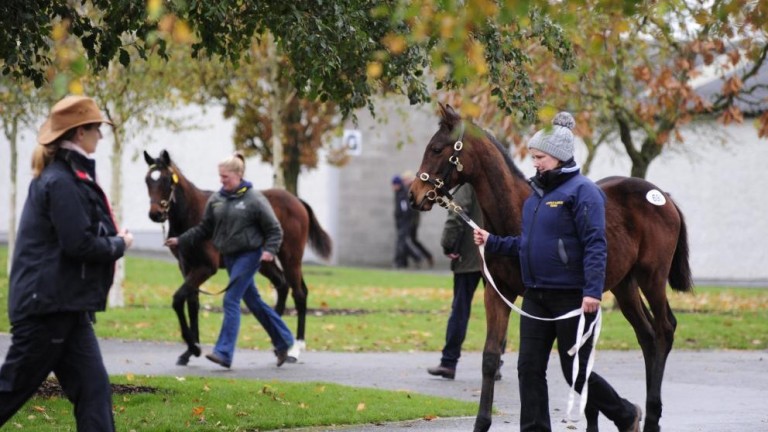 Other first-crop sires represented at Fairyhouse include Buratino, Coulsty and Mehmas
Tattersalls Ireland
1 of 1
By Ollie O'Donoghue UPDATED 10:14AM, NOV 13 2018

Last year a first-crop daughter of Gutaifan stole the show at the Tattersalls Ireland Flat Foal and Breeding Stock Sale, when hammered down to Yeomanstown Stud for €58,000.

A host of well-credentialed young stallions will have representatives at this year's sale, which begins at 10.30am on Friday at Tattersalls Ireland's Fairyhouse auction house.

Baroda and Colbinstown Stud offer a colt and a filly by New Bay, with the colt (lot 170) out of a placed Acclamation half-sister to no fewer than five black-type performers, including Roodeye.

The filly (164), meanwhile, is out of a placed Danehill Dancer half-sister to the Pattison Canadian International winner Relaxed Gesture, one of three stakes performers out of Group 3 winner Token Gesture along with American Derby scorer Evolving Tactics.

All three Pride Of Dubai foals in the catalogue, two colts and a filly, are offered by Moyfinn Stud, including a colt who shares his granddam with last Saturday's Breeders' Cup Turf Sprint winner Stormy Liberal, giving his pedigree a lift in the run-up to Friday's sale.

He also saw his year-older No Nay Never half-brother sell for €100,000 at this year's Tattersalls Ireland September Yearling Sale.

Buratino, Coulsty and Mehmas are other first-crop sires likely to attract the attention of buyers.

Buratino has eight sons and daughters up for grabs, including a colt (77) from Rockton Stud who is related to Sandown Listed winner Icesolator, while Coulsty has ten lots on offer, including a half-brother (123) to Cornwallis stakes scorer Amour Propre consigned by James P Doyle.

Two that appeal outside of the foal section are Dusty Moon (206), a winning Dr Fong sister to Grade 2 winner Spotlight offered in foal to War Command, and Safeenah (223), a two-year-old Oasis Dream filly out of a Listed-placed half-sister to Muhaarar, whose first yearlings have sold for up to 925,000gns this year.