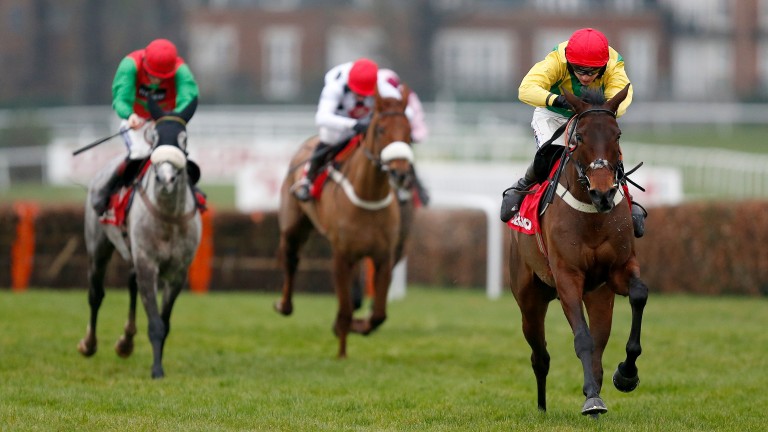 Finian's Oscar has justified his big price-tag in double-quick time, winning the Grade 1 Tolworth Hurdle at Sandown on Saturday less than two months after being bought for £250,000 at the Tattersalls Ireland Cheltenham November Sale.

That sum was paid by Tom Malone and Colin Tizzard for the five-year-old son of Oscar on behalf of Ann and Alan Potts, and was steep because he had won impressively between the flags at Portrush for vendor Denis Murphy shortly before his engagement with the auctioneer at Cheltenham.

Since the sale Tizzard has saddled Finian's Oscar to win a Hereford novice hurdle and to run out the convincing five-length winner of the Tolworth Hurdle from the Montmartre gelding Capitaine.

The horse is now favourite for the Neptune Investment Management Novices' Hurdle at Cheltenham, as short as 4-1 with one bookmaker, although Tizzard is not ruling out the Supreme Novices' Hurdle.

Finian's Oscar was not sold at €25,000 on his first visit to an auction ring, as a foal at the Tattersalls Ireland November National Hunt Sale, but was knocked down to Richard Frisby for €24,000 a few weeks later at Goffs.

He was re-offered as a three-year-old at the Tattersalls Ireland Derby Sale, where he was sold to Tower View Stables for €50,000.

Finian's Oscar is the only runner to date for Trinity Alley, who has a two-year-old filly by Jeremy, was barren after being mated with Yeats in 2015 and was covered by Sageburg last year.

He is another feather in the cap of retired Coolmore National Hunt stallion Oscar, sire of numerous Grade 1 winners including Big Zeb, Black Jack Ketchum, God's Own, Oscar Whisky, Peddlers Cross and Rock On Ruby.