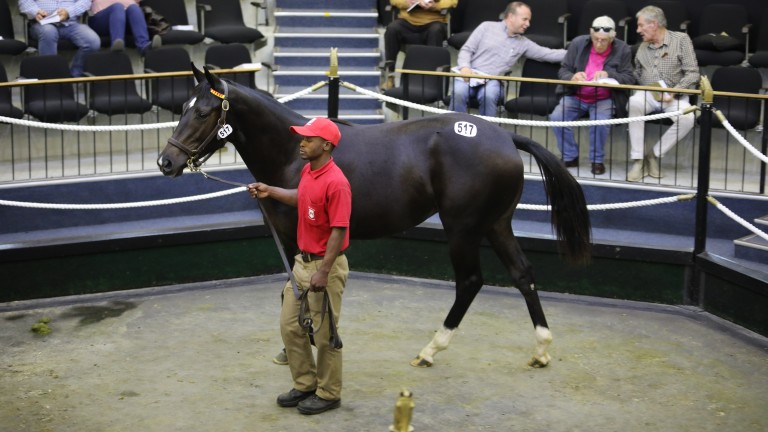 The filly by Gimmethegreenlight out of Scarlet Grits is led around the octagonal ring
Candiese Marnewick
1 of 1
By Ollie O'Donoghue in Johannesburg 4:37PM, APR 26 2019

Fillies by Gimmethegreenlight and Twice Over were the two most expensive lots sold on the third and final day of the Emperors Palace National Yearling Sale in Johannesburg on Friday, when selling for R650,000 (£35,000/€40,600) and R600,000 respectively.

The session-topper by Gimmethegreenlight went the way of leading South African trainer Sean Tarry, who signed for Boland Stud's November-foaled filly on behalf of Antony Beck, president of Gainesway Farm in the US.

"She's a very athletic filly with good depth," said Tarry, from his position to the left of the rostrum. "She could possibly be an early type, but not necessarily."

The filly's dam Scarlet Grits is out of the Grade 3 winner Flaming Corn and shares her third dam with South African Horse of the Year Irish Flame.

Bjorn Nielsen and Form Bloodstock among buyers on day two

The previous top lot on day three was a November-born Twice Over filly consigned by agent Drakenstein Stud, who was signed for by prominent South African buyer Nick Jonsson.

Bred by Hemel 'N Aarde Stud, she has already been named Two For The Road and is out of the Royal Applause mare Mfiftythree Ford, an unraced half-sister to the Grade 2-winning Oasis Dream mare Welwitschia.

"I liked her a lot and love Twice Over," said Jonsson. "She's going to Justin Snaith and in our opinion was the best Twice Over filly in the sale."

Jonsson also made a R1.1 million winning play for a colt by the sire on day one, with the son of the Listed-placed Royal Academy mare Lupin having been sent into the ring by Millstream Farm.

The dual Champions Stakes scorer Twice Over has settled in well to his new home of Klawervlei Stud, where he entered stud in 2013, and his most notable offspring to date are the Durban July hero Do It Again and the Scottsville Gold Medallion scorer Sand And Sea.

Nick Jonsson has also been busy stocking up on progeny of the late Dynasty this week, signing for a R2.2m full-brother to the champion Legislate and a R1.3m sibling to four stakes winners by four different sires. 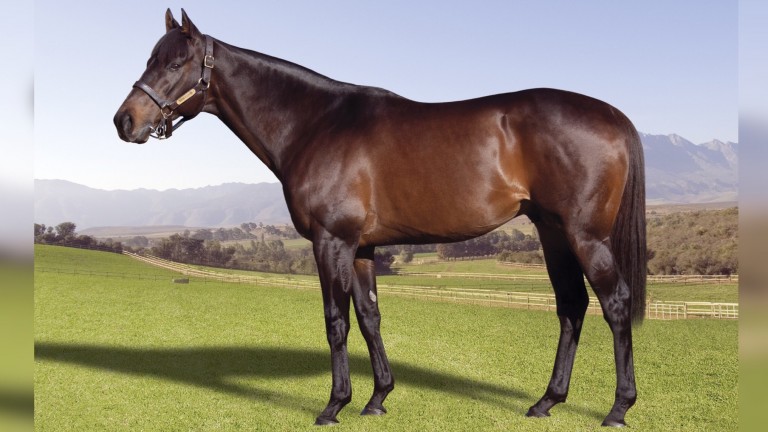 Jehan Malherbe of Form Bloodstock has also made his presence felt across the three days of selling.

Among the sires he has taken a shine to is the Oasis Dream stallion Querari, going to R500,000 for a November-foaled colt out of the Montjeu mare Larking Aroung put up for sale by owner-breeder Klawervlei Stud.

Malherbe said: "He's a nice type of horse and being out of a Montjeu mare should  should improve over ground and distance.

"The mare is going well and has produced a nice type by Querari in the Grade 2-places Romi's Boy."

Malherbe also shared his views on the level of trade this week: "It's been patchy. There's a lot of money for the big horses - almost too many big buyers for the big horses. The middle-to-lower end of the market has been struggling, but that has been a worldwide trend."

Larking Around's dam was covered by Montjeu when he shuttled to Windsor Park Stud in New Zealand.

An extra 29 lots were catalogued for this year's Session 2 of the National Yearling Sale, with 246 changing hands, 30 more than last year, for total receipts of R42,505,000, showing a five per cent year-on-year increase.

'Nick Nugent probably the most colourful auctioneer I've worked with'