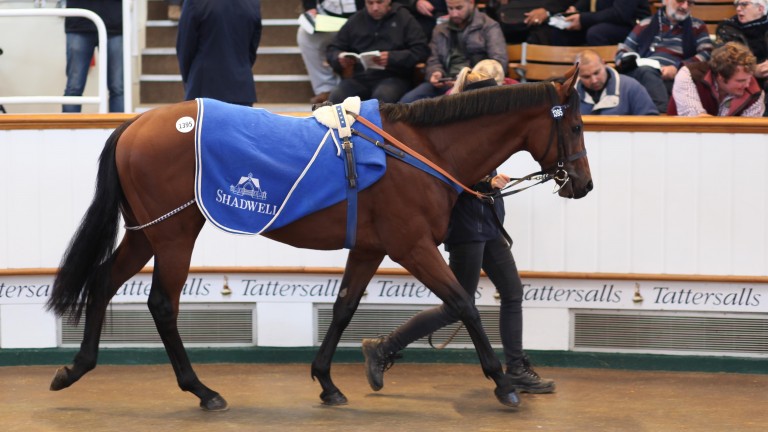 Daysaq: the two-year-old son of Invincible Spirit takes his turn in the Tattersalls ring before fetching 40,000gns
Laura Green
1 of 1
By James Thomas 6:15PM, OCT 31 2019

After four marathon sessions featuring high international demand and plenty of six-figure trading, the Tattersalls Autumn Horses in Training Sale concluded on Thursday with a set of statistics that bore a striking similarity to those achieved 12 months ago.

In turn, those transactions brought turnover of 25,393,400gns, which was down five per cent year-on-year, albeit from an offering that was down by seven per cent (84 lots). The condensed catalogue meant 64 fewer horses were sold than at the 2018 edition of the four-day auction.

There was an average price of 25,780gns - a one per cent increase year-on-year, and a median of 12,000gns - which remained precisely on a par with the benchmark set 12 months ago.

In his end-of-sale chairman's statement, Tattersalls' Edmond Mahony said: "A record price for a colt of 625,000gns, four lots making 300,000gns or more and 14 selling for 200,000gns and above all demonstrate the enduring appeal of this unique fixture."

High levels of international demand for British and Irish bloodstock is often one of the key themes of the Autumn Horses in Training Sale, as was noted by Mahony, who said: "The top 20 lots this week sold to buyers from England, Ireland, America, Australia, Bahrain, Dubai, Hong Kong and Saudi Arabia and it is the diversity and sheer number of buyers which make the Tattersalls Autumn Horses in Training Sale an unrivalled marketplace.

"The Autumn Horses in Training Sale is a magnet for buyers at all levels of the market and the key to the sale’s appeal is that it caters for literally every possible requirement, both Flat and National Hunt. Amongst the top ten lots we had the outstanding Group 1-placed two-year-old Summer Sands, the four-year-old miler Salute The Soldier, the top-class stayer Mekong (sold privately for 400,000gns), a regally bred broodmare prospect Lady Corsica and Juddmonte Farms' improving three-year-old Sash.

"Nowhere else will buyers find such a rich and varied choice of quality proven horses in training and it is this feature which makes the sale an unmissable event for so many people."

Mahony continued: "Every year we marvel at the sustained demand from throughout the Gulf region and 2019 has been no exception. Buyers from Bahrain, Dubai, Kuwait, Qatar and Saudi Arabia have yet again had a massive impact on the sale, and there is no doubt that the growing strength of racing in the region has spurred the buyers on.

"They have been joined by strong contingents from throughout Europe, most notably Greece, Italy, Poland, Spain, Scandinavia and the Czech Republic, and from further afield Americans, Australians and buyers from Hong Kong have all contributed to a sale turnover bettered only twice and an impressive clearance rate of 90 per cent.

"The Autumn Horses in Training Sale has enjoyed consistent success in Australia and the sale’s four high-profile 2019 Group 1 winners there this year have not gone unnoticed with Australian buyers particularly active this week.

"Probably the only other European bloodstock sale that attracts overseas buyers in similar numbers is the Tattersalls December Sale and as we approach Europe's premier foal and breeding stock sale we can take plenty of encouragement from the sustained international demand at Tattersalls over the past four days."

Trade during the concluding session was of a much more prosaic nature than the days that came before, with trainer Mark Loughnane's purchase of the well-related Daysaq for 40,000gns topping the market.

Bred and sold by Shadwell, the two-year-old son of Invincible Spirit made two starts for Owen Burrows, including when he achieved a Racing Post Rating of 70 for his fourth-placed finish at Wolverhampton on debut in early October.

"His first run at Wolverhampton was very good but he didn't run so well on his second start," said Loughnane.

"I don't think the track at Chelmsford suited him though. We’ll keep him going on the all-weather but we’ll get him home and make a plan from there. I've bought him for a syndicate who already has horses with me."

The colt is out of Fawaayed, a Singspiel half-sister to Queen Mary Stakes winner and 1,000 Guineas third Maqaasid.

Thursday's session was down markedly on numbers compared to the corresponding day 12 months ago, with 202 lots offered, 93 less than in 2018.

Catch up on all the Autumn Horses in Training Sale news: