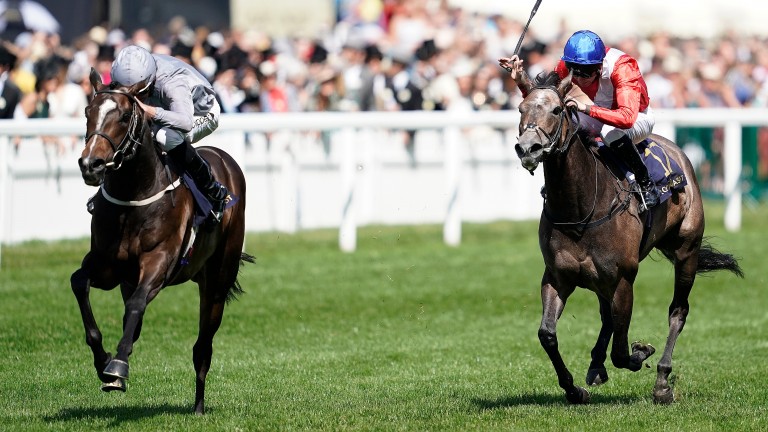 Space Traveller, the classy winner of the likes of the Jersey Stakes and Boomerang Mile in a productive career for Steve Parkin's Clipper Logistics, has retired to Ballyhane Stud for the 2023 season and will stand at a fee of €6,500.

Bought by Joe Foley of Ballyhane for 85,000gns at Tattersalls Book 3, Space Traveller made a fine start to life with Richard Fahey, winning twice and placing in Group 3 company as a juvenile.

Aside from his scores at Royal Ascot and Leopardstown at three, the son of Bated Breath would win the Listed Ganton Stakes after a somewhat interrupted spell as an older horse. He was moved across the Atlantic to Brendan Walsh and produced a creditable string of efforts in Grade 1 company, the latest when second in the Frank E Kilroe Mile at Santa Anita in March.

Space Traveller ought to have plenty to offer, being out is out of a Galileo mare from the top family of Crystal Music

"We’re delighted to welcome Space Traveller back to Ballyhane," said Foley. "He was a really good-looking yearling and has developed into a tremendously imposing individual.

"He gave us some great days on the racetrack and his Royal Ascot win was memorable as his acceleration that day was so impressive. By Bated Breath out of a Galileo mare who herself was out of a Kingmambo mare, he gives breeders some top-class bloodlines to mate to."

Dandy Man heads the six-strong Ballyhane Roster and the veteran's fee is unchanged for 2023 at €15,000. There was also no movement on Parkin's fine sprinter Soldier's call at €7,500.

FIRST PUBLISHED 1:36PM, NOV 13 2022
He was a really good-looking yearling and has developed into a tremendously imposing individual