Fee and plans revealed for champion son of Lucky Pulpit 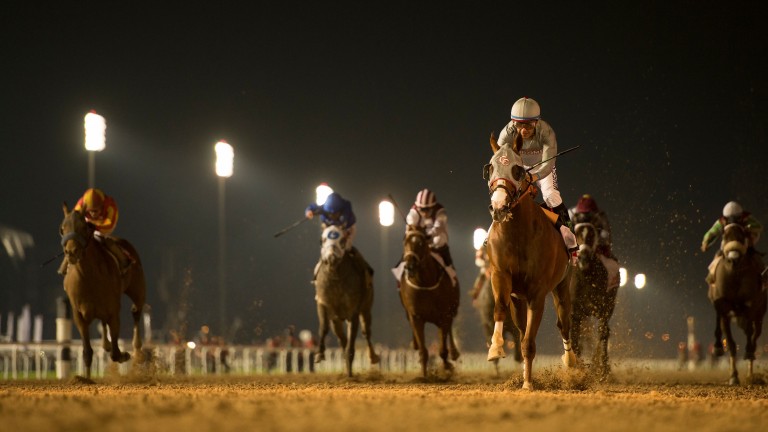 California Chrome romps to victory in the Dubai World Cup, one of seven top-level successes on his CV
Edward Whitaker
1 of 1
By Michele MacDonald 2:39PM, NOV 9 2016

The owners of California Chrome, the world's highest ranked racehorse who finished second in the Breeders' Cup Classic after galloping through his six previous races this year in spectacular undefeated fashion, have decided he will stand at stud in 2017 for a $40,000 stud fee.

Duncan Taylor, president of Taylor Made Farm, confirmed during the opening session of the Keeneland November sale that the five-year-old earner of over $14.4 million is still aimed at the new $12 million Pegasus World Cup at Gulfstream Park in January but then - barring unforeseen circumstances - will be retired to Taylor Made.

"We just thought it was better to go ahead and announce it. There's still a two to five per cent chance [he will race more after the Pegasus], but unless something happens that is unpredictable, he's going to be in the breeding shed next year," Taylor said.

"It's a conglomerate," Taylor said of California Chrome LLC. "We don't own all the mares together, but we're signing for all of them because we're really going to support this horse and make him.

"We're going after some lines that we really think are going to work with him and we're doing our research and trying to buy the mares to give him the best chance."

As part of the agreement under which Taylor Made acquired breeding rights to California Chrome, the Taylor brothers have a major role in assembling mates for the five-year-old son of Lucky Pulpit out of Love The Chase, by Not For Love.

Additionally, Taylor Made consigned Love The Chase to the Fasig-Tipton November sale the day before the Keeneland auction began, and she was sold, in foal to Tapit, by California Chrome's co-breeder and co-owner Perry Martin for $1,950,000, with agent John McCormack signing the ticket on behalf of an American-based client he did not identify.

Martin has indicated he will use the proceeds to buy mares for the winner of the 2014 Kentucky Derby and Preakness Stakes and this year's Dubai World Cup.

The first mares purchased by California Chrome LLC were led by Uchitel, a nine-year-old daughter of Afleet Alex whose second foal, Suddenbreakingnews, is a Grade 3 winner who finished second in the Arkansas Derby and a creditable fifth in the Kentucky Derby. Currently in foal to Tapit, Uchitel was acquired for $420,000 from Taylor Made's consignment; her last foal, a yearling filly by Bernardini, was bred by Branch Equine and Darley.

Also purchased by California Chrome LLC was the three-year-old Eskendereya filly Right There, a stakes winner who is Grade 1-placed and whose second dam produced Kentucky Derby and Preakness winner Silver Charm. Right There had been raced by a partnership including Big Chief Racing.

Taylor said that since California Chrome's dam is linebred 3x3 to Buckpasser's champion daughter Numbered Account, mares carrying more lines of Buckpasser are high on his preference list for California Chrome, as are mares by other stallions with crosses of the foundation mare La Troienne.

Mares by Unbridled's Song, who shares his second dam with Lucky Pulpit, also are desirable, as are mares by Empire Maker and Lemon Drop Kid, Taylor said.

"I've used this analogy before, but when you find an old painting in the attic and you think it can't be worth that much until you clean it up and wipe it off and find out it's a Monet - that's sort of how [California Chrome's] pedigree is.

"When you first look at it, you see Lucky Pulpit, a $5,000 stud. But when you start analysing the genetics, there is so much there," Taylor said.

So far, Taylor said breeders' reactions to plans for California Chrome and his stud fee, which has been discussed privately prior to a planned public announcement later this week, has been positive.

"I think it's a very fair stud fee. I haven't heard anybody say it ought to be lower than that, and I have heard people say it's a good deal," Taylor said.

Currently, there are 17 partners who share in ownership of California Chrome, led by Martin and Taylor Made and including a number of Taylor Made's longtime clients such as Chiyoda Farm owner Dr Masatake Iida of Japan and Kiki and Louise Courtelis's Town & Country Farms.

FIRST PUBLISHED 2:37PM, NOV 9 2016
I've used this analogy before, but when you find an old painting in the attic and you think it can't be worth that much until you clean it up and wipe it off and find out it's a Monet
Bookmaker
Price
E.W. Terms
bet365
Open Account
Ladbrokes
Open Account
William Hill
Open Account
Coral
Open Account
Paddy Power
Open Account
Betfair
Open Account
Sky Bet
Open Account
Sporting
BetVictor
Boylesport
888sport