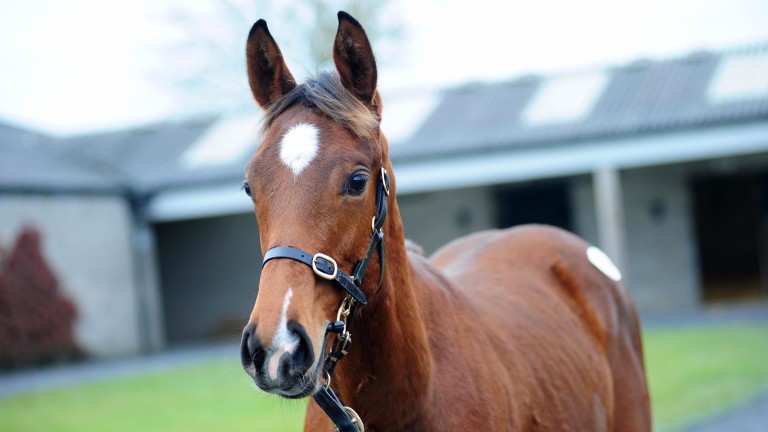 Tattersalls Ireland remains on course for a stellar showing from the November National Hunt Sale as buyers steamed right back in during a fourth day of buoyant trade on Wednesday.

The key market indicators on day four were all showing increases at the close of play with the aggregate sales of €3,694,100 surpassing the figure from the corresponding session last year by 15 per cent. The average jumped by a fifth to €20,186, while the median grew by 14 per cent to €16,000, the same impressive figure as the previous day.

Topping Wednesday's session was a son of Milan with a poignant tale as his half-sister, the brilliant champion bumper horse of last season Fayonagh, recently died after getting her hurdling career off the perfect start at Fairyhouse. Consigned by Galbertstown Stud, Fayonagh is not the only star mare on the page as the outstanding and titanium-tough hurdler Solerina is a half-sister to the dam of the €78,000 colt.

David Magnier of Grange Stud, where Milan stands, was the winning bidder and he later expressed his pleasure at having secured the colt.

"He's a very nice colt and very well related. The Milan and Soldier Of Fortune foals are selling very well," he said.

Soldier Of Fortune, the Irish Derby winner bred by Jim Bolger, was the busiest sire in Ireland and the United Kingdom in 2016 covering 304 mares. Retired to Haras du Logis Saint Germain in 2010, his success with his first crops in France prompted his return to Coolmore's Beeches Stud for the 2016 breeding season and he has rewarded the Magniers and the breeders who supported him in such numbers with quality foals.

His total sales on Wednesday were €366,000 with an average of €30,500, with his most expensive foal knocked down for €72,000, having been bred off an advertised covering fee at €5,000. He remains the sire of the most expensive filly foal sold so far this week.

A Soldier Of Fortune colt created late drama on Wednesday night with Fiona Magee and Richard Rohan, who bought Tuesday's €80,000 top lot, duelling with Timmy O'Byrne for the stunning colt from Mountain View Stud in Tipperary. Twice Magee shook her head and walked away before returning to the fray but when O'Byrne countered with a bid of €72,000 she threw in the towel.

The bay is the third foal out of the unraced Flemensfirth mare Afaraka, a daughter of Brown Lad Handicap Hurdle winner Afarka from the family of Agrapart who won the Grade 2 Relkeel Hurdle for Nick Williams on New Year's Day at Cheltenham.

"He is a very good looking colt by a very good sire," said O'Byrne. "He moves very well with a great action, plans for his future are up in the air at the moment." 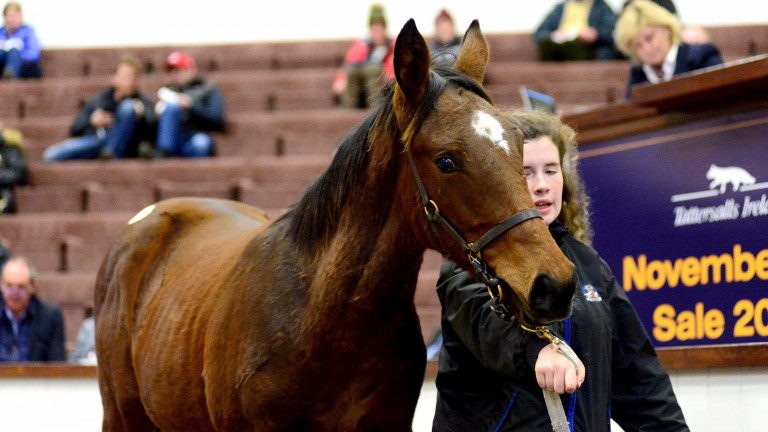 The Soldier Of Fortune colt snapped up by Timmy O'Byrne for €72,000
Healy Racing / Tattersalls Ireland

Flemensfirth, a studmate of Soldier Of Fortune, was the sire of the day's second most expensive foal, a colt out of Lucky Fancy who combined two of the best National Hunt sires around in his pedigree as his damsire is none other than Kayf Tara.

Offered for sale by the Beeches Stud, the colt is the first foal of a half-sister to Grade 2 bumper winner Diamond Sal and Listed hurdle winner Ring The Boss. Another half-sister Theatre Girl, a high-class hurdler for trainer Alan King, is the granddam of the Kayf Tara colt bought by Henrietta Knight for €66,000 here on Tuesday.

Kevin Ross, standing with Ben Case, struck the winning bid on the colt, who will probably return to the sales ring as a store.

"He is a good-looking horse by a proven sire out of a Kayf Tara mare and from a good family," commented Ross. "He has been bought for resale for an established client of the farm."

Case and Ross teamed up to good effect throughout the day making a total of five purchases together, headed by the €75,000 Flemensfirth colt. They also bought a €60,000 Walk In The Park half-brother to Grade 3 hurdle winner Monalee, who was second in the Albert Bartlett Novices' Hurdle for Henry De Bromhead and David Mullins last March.

The colt, consigned by Ballincurrig House Stud for breeder Aidan Aherne, is out of a half-sister to Thyestes Chase heroine Be My Belle and Rose Of Inchiquin, a Grade 2 hurdle winner and dam of three black-type winners.

Case and Ross were also the successful bidders on the only foal offered by leading French sire No Risk At All, consigned by Vanessa Teehan-Rouzier's Charel Park Stud. The colt is a half-brother to a jumps winner in France.

Their dam Signature is a sister to Listed hurdle winner Robin De Sherwood and a half-sister to Grade Lightning Novices' Chase winner Exit To Wave and to the dam of Little King Robin, a Grade 2 hurdle winner that placed twice in Grade 1 company for Colin Bowe. It is also the family of last season's Gold Cup winner Sizing John and Theatre Bird.

A striking son of Getaway out of a half-sister to J'y Vole, a Grade 1 novice chase winner for Willie Mullins, was bought by Rachel Evans with James Read of Selwood Bloodstock for €65,000. The colt's dam J'y Viens has made a promising start to life as a broodmare with her first foal, a gelding by Flemensfirth named Mance Ryder. who cost €155,000 at the 2016 Derby Sale and a bumper winner on debut for Philip Hobbs earlier this year.

"Rachel has bought him on behalf of Matt Booth, who is based in Gibraltar," explained Read. "He could decide to retain him or bring him back for sale as a three-year-old. He comes from a really good farm and is an amazing mover."

The dark grey colt was consigned by Cleaboy Stud and Coppice Farms on behalf of breeders Corrib Racing.

Cleaboy Stud and Coppice Farms later offered a half-sister to J'y Vole and Listed hurdle winner Jeanquiri for breeder George Clohessy. The daughter of Fame And Glory, who counts Gold Cup winner Long Run and Full Of Ambition among her relations, was sold to the Hollow Farm for €37,000.

A slightly smaller amount of foals sold than on the corresponding day in 2016, with 183 changing hands on Tuesday, nine less than the year before. Wednesday's clearance rate was a respectable 76 percent, a marginal improvement of one point on the 2016 figure.

Continuing on from Tuesday's remarkable sale, which saw a record-breaking average, ten foals managed to sell for €50,000 or more. Three of those made more than €70,000 - a barrier broken by ten lots so far this week, reiterating how strong trade has been.