Fastnet Rock filly on top as Book 1 ends with increases 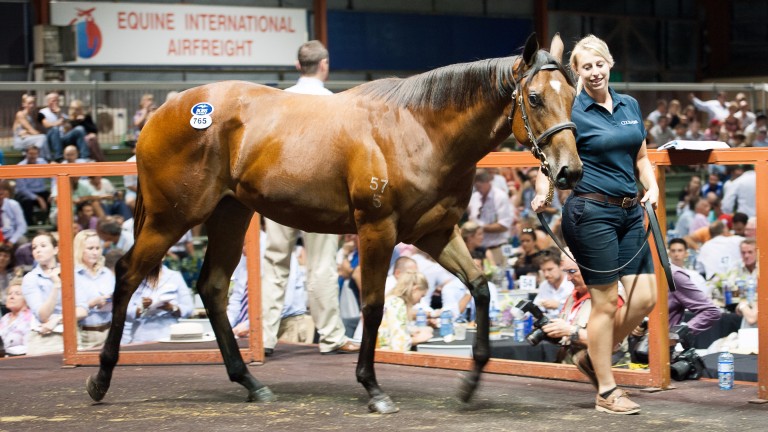 The Fastnet Rock filly out of Dazzling Gazelle bought by Coolmore for A$1.2 million
Katrina Partridge/Magic Millions
1 of 1
4:23PM, JAN 14 2017

Book 1 of the Magic Millions Gold Coast Yearling Sale concluded on Saturday evening with a session that took place in a packed sales complex situated just across the road from the racecourse where over A$10 million (£6,156,447/€7,046,978) worth of prize-money had been distributed at the Magic Millions raceday.

The winner of the day's feature event, the Magic Millions 2YO Classic, went the way of Houtzen, a daughter of I Am Invincible who was picked up for A$105,000 by trainer Toby Edmonds at last year's renewal of the Gold Coast Yearling Sale.

The filly may have been named Houtzen by accident - her owners had intended to name her after the Victoria's Secret model Doutzen Kroes until autocorrect intervened - but there was no mistaking her superiority after she overcame a wide draw to make all in the A$2m event.

In an emotional address to the packed stands after Houtzen's success one of a large group of winning owners said: "If you haven't got a partnership in a horse, it doesn't cost that much if you go in low.

"Get involved guys, because whether you win a maiden at Kilcoy or you win a race like this, you'll feel like you'll never have another loser in your life."

With the demand at the Magic Millions sale grounds having reached record levels over the four days of selling, it seems plenty of people are indeed keen to get involved.

The clearance rate took a slight dip of two points from 89 per cent to 87 per cent, but that was from a catalogue that had expanded by nine per cent to 816 lots.

In light of that, it is particularly noteworthy that both the average and median figures continued to rise despite more lots coming under the hammer, especially as there was five seven-figure lots, one fewer than 12 months earlier, and the top price paid was A$1.3m, A$300,000 less than the previous year's.

"We're very happy," said Magic Millions managing director Vin Cox. "As I'd said before, if we had have got somewhere near last year we would have been very happy as it was a great sale last year.

"But we've gone above that by quite a margin. We had more horses in Book 1 and our clearance rate was pretty much the same and our average has increased and our turnover has gone up massively."

The leading vendor for the second year in succession was Arrowfield Stud, which sold 38 lots for A$10.9m at an average of A$286,842.

Arrowfield also dominated the sires' lists, with Snitzel topping the sires' aggregate table on A$13,835,000 for 41 sold, the mighty Redoute's Choice - the sire of Snitzel - topped the sires with more than three lots sold average list on A$369,583 for 12 lots sold, and Dundeel, a son of High Chaparral, fared best of the freshman sires in terms of average, with a return of A$272,500 for ten sold.

Racegoers may have flocked to the sales ring, but despite the biggest crowd of the week there seemed to be fewer buyers in the room as the truncated final session couldn't quite keep pace with the preceding three days of selling.

Fantastic Fastnet
The undoubted highlight of the concluding session was the Fastnet Rock filly out of the unraced More Than Ready mare Dazzling Gazelle, offered by Coolmore on behalf of Stonestreet Stables owner Barbara Banke. After a range of determined plays the strong-shouldered filly eventually went the way of Coolmore's Tom Magnier, stood with his brother MV, after a bid of A$1.2m (£738,773/€845,637) had seen off the opposition.

The filly, who is now due to head into training with David Hayes, is a half-sister to dual Group 1 winner Miracles Of Life, who carried the colours of Stonestreet to success in the 2013 renewal of the prestigious Blue Diamond Stakes.

"Barbara bought the mare at the sales and sent her back to Coolmore," explained Magnier. "She's bred a fantastic yearling. We've had a lot of success with Fastnet Rock - [four-time Group 1 winner] Atlantic Jewel is by him - we just need a bit of luck now.

"To be fair, what she's done with Miracles Of Life, the dam is great. We're delighted that Barbara mated the mare with Fastnet. We saw the result here today, it was fantastic. When you get a mare with a pedigree like that, and the way that Fastnet goes with the fillies, we knew we'd have to pay for her."

Dazzling Gazelle was purchased in foal to Not A Single Doubt by John Moynihan on behalf of Banke at the 2014 Gold Coast National Broodmare Sale for A$400,000.

With the sale well into the latter stages by this point Magnier was keen to heap praise on the Magic Millions team, saying: "I'd just like to say we give great credit to Magic Millions. They get all these people down to Australia, people come here because of what Magic Millions puts on. Credit to Katie, Gerry, Vin Cox and the whole team. The whole world is watching what is going on here this week."

Fastnet Rock entered stud at Coolmore Australia on a fee of A$55,000. By 2013 that figure had increased to A$275,000, and he has been private in the three seasons since. He finished fourth on last season's leading Australian sires' table.

The son of Danehill has also shuttled to Ireland since 2010, and in 2016 supplied a trio of European Group 1 winners in Fascinating Rock and the two-year-olds Intricately and Rivet.

Blaxland back in action
Later in the session Julian Blaxland of Blue Sky Bloodstock, who has been active throughout the week signing for a number of lots in a variety of partnerships, went to A$550,000 for a regally bred son of Exceed And Excel.

"He was a quality physical first and foremost," said Blaxland. "I thought he was a beautiful colt, he's by a stallion that's highly successful in both hemispheres and he's a three-quarters brother to one of the best fillies we've seen in recent times. Hopefully he can be an early two-year-old and go on from there. He'll be trained by Tony McEvoy for Aquis Farm and Raffles Racing."

The compact chestnut is out of the dual Group 1-winning Scenic mare Episode, who has produced seven winners from eight foals of racing age, including the Group 1 winner First Seal, a daughter of Fastnet Rock, the Group 2 winner Book Of Kells and the Listed-placed Best Command.

Blaxland gave his view on the strength of the market at Magic Millions, and in particular the demand for colts.

"That's about what you have to pay for those colts with a pedigree," he said. "It's been strong on the good horses this week and very solid in the middle, we've been beaten a number of times but we've also bought some really nice horses. It's always strong on the good horses wherever you go. We're all trying to get the same thing when you buy colts like that, and that's stallions at stud. If you can partner up with some different guys and spread the capital further, you'll have more horses running for you."

The final lot of Book 1 may have gone through the ring, but the agent said the search for future stallion talent was far from over for the week.

"That's probably our shopping finished for this evening, but there's some really nice colts in the second session and we'll be looking for a bit of value. Horses don't know what they cost, after all," he said.

The colt was consigned by Bhima Thoroughbreds, whose Mike Fleming commented: "We're very happy. He obviously has a lovely family behind him, so if he can go on and do something on the track, then he's a stallion prospect. He's a sharp sort of a horse, he looks a two-year-old and a runner. With Aquis Farm buying him, he'll go to a good home and get every chance.

"I thought he was a A$400,000 to A$500,000 sort of horse with that page behind him so it's a great result. He was bred by Raffles Farm, they bred and race part of First Seal, so they know the family. It's great to see people who put so much into the industry get a result."

Zoustar shines
At the start of the Magic Millions Gold Coast Yearling Sale David Redvers said he would be in the market for the progeny of Zoustar, the son of Northern Meteor who is parted owned by Sheikh Fahad, and by the end of Book 1 the Qatar Racing racing manager had secured six lots by the Widden Stud resident.

Redvers partnered with Guy Mulcaster on three of those lots, and spent a total of A$1,980,000, the priciest of which came during the final session, spending A$550,000 on the Widden-consigned filly out of the Listed-winning General Nediym mare Combat Kitty.

FIRST PUBLISHED 4:22PM, JAN 14 2017
We had more horses in Book 1 and our clearance rate was pretty much the same and our average has increased and our turnover has gone up massively