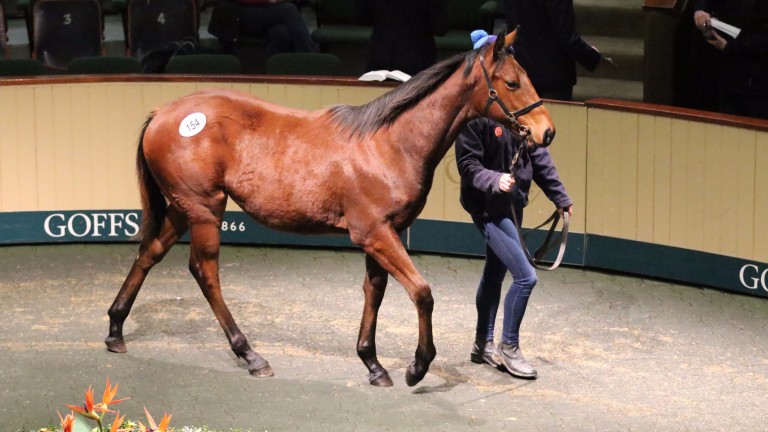 The Fast Company colt in the ring during the first session of trade at Goffs
Peter Mooney
1 of 1
By Aisling Crowe at Goffs 9:21PM, NOV 13 2016

Ballyhane Stud's Dandy Man was the hero of the hour at Goffs on a subdued opening day of trading for the first session of the November Foal Sale on Sunday.

Trade was sluggish with less than half of the 174 foals offered changing hands and a clearance rate of 47 per cent.

Only four foals managed to break through the €20,000 barrier and two of them, including the day's most expensive filly, were by Dandy Man.

The top price was €42,000 for a colt by Fast Company out of Zalanga, a winning daughter of Azamour, bought by Francis Killen.

The Rathasker Stud-consigned colt is a half-brother to last month's impressive Gowran two-year-old maiden winner Zelaniya for her owner-breeder the Aga Khan. They hail from the family of the Aga Khan's unbeaten champion filly Zarkava.

This year's Irish 1,000 Guineas winner Jet Setting is the first Group 1 winner by the stallion, who stood his first five seasons at Rathasker Stud, and has three crops of racing age. Baitha Alga, winner of the Norfolk Stakes in 2014, was Fast Company's first group winner and was bred by out of his Fantastic Light mare Tawaafur.

"This foal reminded me a bit of Baitha Alga. He will probably come back for sale as a yearling. I have three mares at home on the farm in County Down including Baitha Alga's dam in foal to Anjaal, but she will go back to Fast Company next year," said Killen.

Browne a fan of Dandy Man

A son of Dandy Man led the way for most of the day and the exuberant, good striding colt was bought by Willie Browne for €38,000. Like the top lot, his pedigree traces back to an Aga Khan family, in this case that of the great Darshaan.

"The stallion is flying," said Browne. "Dandy Man is very much a sire on the up. This colt was a fantastic mover with a really good action and one of the best here on Sunday. He's out of an Invincible Spirit mare and I like that."

Browne had been busy earlier in the sale purchasing a colt by another Ballyhane resident, Elzaam, for €18,500. He is the second foal out of Manalisa, who is a Manduro half-sister to multiple Graded winner Valbenny.

Browne sold another son of Elzaam at Doncaster earlier this year and is hopeful that this colt will prove to be a profitable purchase.

"I had one by the sire this year that worked out well in Doncaster and he's a sire that has done very well. This is a nice colt and he has a bit of a page too. The yearling by Dandy Man is in training with Keith Dalgliesh which gives him a chance."

Worth the wait for Tally-Ho

The most expensive filly of the day came right at the end of the sale on Sunday and Tony and Roger O'Callaghan of Tally-Ho Stud had to go to €31,000 to secure a daughter of Dandy Man.

The chestnut filly is a half-sister to a multiple winner by Tagula and comes from a speedy family.

Roger O'Callaghan said: "She was the best filly in the sale on Sunday and has been bought to re-sell but whether that is as a yearling or a two-year-old only time will tell."

Mickley Stud's first-crop sire Heeraat won the new stallion popularity contest with buyers as two of the four foals sold by the stallion made the top ten on the day and his average was €13,125 for foals conceived on a covering fee of £4,000.

Paula Flannery bought the most expensive foal by Heeraat on Sunday, a colt who is the first foal of the unraced Street Cry mare Ringtail and was consigned by Mickley Stud.

"He'll come back for sale next autumn," Flannery confirmed. "Heeraat is a good son of Dark Angel and he's getting nice stock so I was pleased to be able to buy this colt."