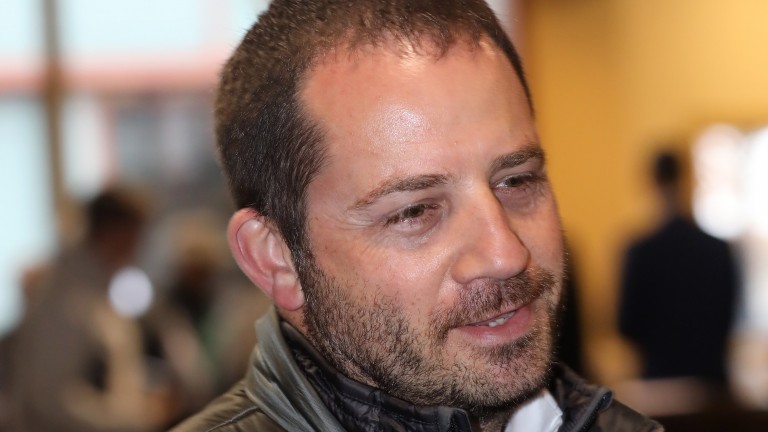 Unseasonably warm weather and stiff competition for the better-quality broodmares and broodmare prospects combined to produce strong gains in the average and median during the Fasig-Tipton Kentucky Winter Mixed Sale on Monday and Tuesday.

"The most common complaint I heard from consignors was they wish they had more horses in the sale because it was a very solid, strong marketplace throughout," said Fasig-Tipton president Boyd Browning jnr.

While quality stock still moves the market, there were indications of greater activity at lower price ranges than seen in recent years.

"There are no surprises in the marketplace," Browning said. "Quality is very desirable. Some people are willing to buy broodmares who may not have been doing so three or four years ago, not just at the top but at the $30,000, $40,000 and $50,000 levels, which is very encouraging. I think people have a higher level of confidence to expand their broodmare band or to start a broodmare mare."

Temperatures hovered in the mid-60s for most of the two-day sale, boosting not only moods among buyers and sellers but also making for a more pleasant atmosphere for trade than can usually be found in central Kentucky in early February.

With the North American breeding season set to begin within a week, breeders and their representatives gravitated to the horses on offer that were in foal to commercially successfully stallions or were coming off the track after successful careers and whose principals were looking to monetise their investments.

As expected, the top lots drew premium bids while those with lesser race records or in foal to less commercially appealing stallions came up short.

"It's feast or famine," said consignor James M Herbener jnr. "If you have something two or three people want, they sell well but if you don't it's hard."

"Just in general, like everywhere, you end up spending more than you think you were going to have to, but that's what you've got to do if you want to get it done," said Mark Hubley of KatieRich Farms, after landing Taking Aim, a half-sister to Gainesway stallion Tapizar, for $200,000. "The market is strong right now."

Carrie Brogden of Machmer Hall and Select Sales said that considering the state of the market, breeders should be in the process of culling their herds with an emphasis on quality.

"If you have a horse that is considered a commercial horse, you do fine," she explained. "If you have a mare that has not produced, you don't do fine. But that's the way it should be. We're learning at Machmer Hall to sell some of our mares while they still have some value rather than riding it all the way down (the market). There is plenty of money for what is perceived to be quality but the rest shouldn't be bred. How can make you money on that?"

The Tuesday session topper was the final horse through the ring, the striking gray or roan five-year-old mare La Manta Gris, a stakes-placed daughter of Lemon Drop Kid with a top female family.

A late addition to the sale by Lane's End, La Manta Gris was purchased by Lane's End Bloodstock's David Ingordo. She was produced from Quiero Ganar, a winning Lasting Approval mare who is a full-sister to Honey Ryder - a 13-time winner who earned more than $2.78 million and whose stakes victories included the EP Taylor Stakes and Flower Bowl Invitational Stakes, both Grade 1s run on turf.

Bred in Kentucky by Nursery Place and Hendrickson, La Manta Gris was purchased by Martin Anthony for $130,000 from the Eisaman Equine consignment to the 2016 Ocala Breeders' Sales March Two-Year-Olds in Training Sale. Eisaman acquired La Manta Gris as a yearling for $40,000 at the 2015 Keeneland September Sale. Racing for Blackstone River Stable, the mare placed third in the Dueling Grounds Oaks and Keertana Ovenright Stakes, both on turf.

Ingordo, who signed the sale receipt as "Jacques Sparrow Bloodstock," said he was well acquainted with the mare, having purchased La Manta Gris as a two-year-old on behalf of Rocco Baldelli, manager of Major League Baseball's Minnesota Twins. Baldelli campaigned the mare and sold her because of business obligations.

"She had one of those little tiny vet issues (when offered as a two-year-old) that scare a lot of people, but it didn't scare us," he said. "Her pedigree speaks for itself. It's a rare pedigree. I thought she was going to be a nice addition to our broodmare band at the farm."

Ingordo said the mare would be bred to a Lane's End stallion, likely Quality Road or City Of Light, and a decision would be made on whether to re-sell or retain her.

Top price Tuesday for a yearling was the $75,000 paid by Billy Williams for hip 334, a New York-bred colt by Palace consigned by Endeavor Farm as agent.

The overall sale topper was Grade 2 winner Cheekaboo, bought by KR Japan for $300,000 on Monday from Small Batch Sales, acting as agent. The winning bid was made via phone, with Fasig-Tipton's Terence Collier taking the bids. A chestnut daughter of the deceased top California sire Unusual Heat, Cheekaboo was trained by Peter Eurton for Ciaglia Racing, Burns Racing and Sharon Alesia. She won or placed in 13 of her 24 starts including two stakes as a three-year-old - the Grade 2 Honeymoon Stakes on turf and Campanile Stakes. Overall, the mare placed in stakes on five occasions and earned $371,995.