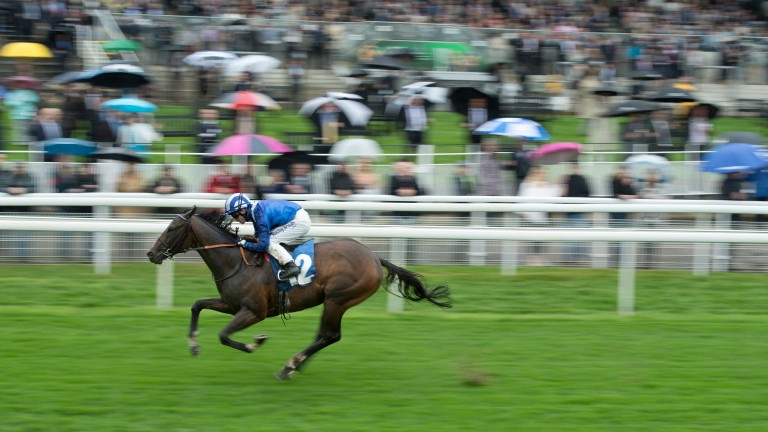 Tasleet: son of Showcasing runs out an impressive winner of the Group 2 Duke of York Stakes
Edward Whitaker
1 of 1
By James Thomas 7:44PM, MAY 17 2017

Last week’s news that Khalid Abdullah’s Juddmonte operation has sold two significant tracts of land may have given rise to concern about the long-term future of his hugely successful breeding operation. Results from the opening day of York’s Dante meeting, however, gave a vivid reminder that Juddmonte’s meticulously managed bloodlines are built on far deeper foundations than mere real estate.

Back in 1993 Prophecy, a top-class daughter of Warning, did the firm an almighty turn by winning the Cheveley Park Stakes, a race with a famed reputation for identifying notable producers. Even so, few could have foretold the kind of impact Prophecy would still be having through two of her daughters some 24 years later.

Prophecy’s second foal was Arabesque, a daughter of Zafonic who was trained by Henry Cecil to win a Pontefract Listed event in 2000. But it was upon retiring to the paddocks that Arabesque really began to make a name for herself, as she is the dam of half-brothers Camacho and Showcasing. Both made their mark, but both have outshone their on-course exploits with their ability to produce speedy and talented runners in the breeding shed, particularly Showcasing, with Wednesday’s runaway Duke of York Stakes winner Tasleet very much a case in point.

The four-year-old colt, now bound for the Diamond Jubilee at Royal Ascot, looks a sprinter well worth following - particularly in light of the achievements of another of Showcasing’s offspring, last year’s Sprint Cup and Commonwealth Cup heroine Quiet Reflection.

Tasleet has presumably given William Haggas more than his share of issues, having raced just four times since his juvenile campaign, but if connections’ perseverance was a clue as to his ability, Wednesday’s display gave an ample demonstration as to why he has remained in training.

Jockey Jim Crowley was forced to chart a rather rough passage as he and his strong-travelling mount worked their way to the head of affairs, but once they found clear sailing the result was never in doubt as they powered two and a half lengths clear of Magical Memory, who had landed the 2016 renewal of this Group 2 prize.

Bred by Whitsbury Manor - residence of Showcasing - Tasleet is the sixth foal out of the 16-year-old Cadeaux Genereux mare Bird Key, an unplaced half-sister to the Champagne Stakes winner Etlaala. That makes him a half-brother to the minor winners Makaamen and Face The Future. Since producing Tasleet, bought by Shadwell for just £52,000 from the Goffs UK Premier Yearling Sale, Bird Key has since delivered a colt by Compton Place, who had twice been withdrawn from the sales; and a filly by Coach House, bought by agent Richard Knight for 23,000gns from the 2016 Tattersalls December Foal Sale.

In landing the Duke of York Stakes Tasleet went one place better than his sire, Showcasing having gone down by a diminishing half length to Prime Defender in the 2010 renewal. Having started out at Whitsbury at just £5,000, he has since worked his way up to £35,000 this year. As such, the emergence of Tasleet represents a timely boost to his reputation.

Prophecy’s legacy was further enhanced in the very next race, as her granddaughter, the well-regarded Shutter Speed, staked her Classic claims with a ready victory in the Group 3 Musidora Stakes.

Despite having made a winning debut on ground described officially as soft at Yarmouth last October, with York having received plenty of rainfall Shutter Speed’s participation had been in some doubt. In the event though she barely gave her supporters a moment of worry, and having quickened to the lead with two furlongs left to run she made relatively light work of seeing off Vintage Folly by a length and three quarters.

In landing the Musidora Shutter Speed became a 180th stakes performer, and 69th Group winner, for the 21-year-old Banstead Manor Stud sire - and Juddmonte homebred - Dansili, who has previously supplied such talented fillies as The Fugue, Giofra, Fallen For You and Miss France. Dansili is no less adept at producing high-calibre colts, however, with a burgeoning reputation as a sire of sires thanks to the likes of Zoffany, Bated Breath, and Harbinger. 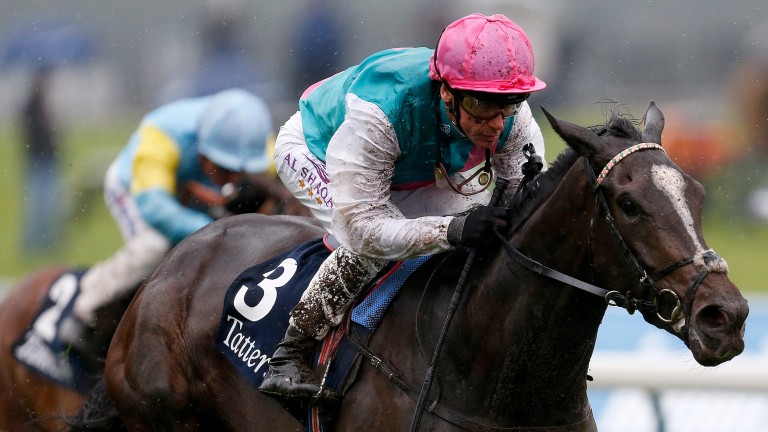 Shutter Speed descends from Prophecy through her tenth foal, Photographic. An 11-year-old daughter of Oasis Dream, Photographic is a half-sister to the Australian Group 1 winner Foreteller and French Group 2 winner Modern Look - as well, of course, to the dam of Showcasing.

Since producing Shutter Speed, Photographic has delivered three further foals: a filly by Champs Elysees, now two; a Dansili sister, who sadly died after birth; and this year, a colt foal by Iffraaj.

It is far from inconceivable that both of Wednesday’s winners could climb to the very top of their respective divisions and, with pedigrees so rich in Juddmonte bloodlines, both share a lineage that entitles them to do so.

FIRST PUBLISHED 7:21PM, MAY 17 2017
It is far from inconceivable that both of Wednesday’s winners could climb to the very top of their respective divisions