The filly became the sire's most expensive yearling 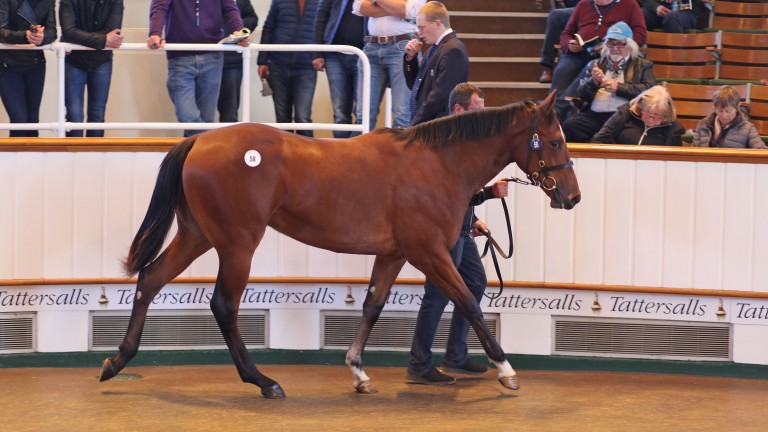 Lot 58: the Muhaarar half-sister to Fairyland in the Tattersalls ring
Laura Green
1 of 1
By James Thomas UPDATED 7:41PM, OCT 9 2018

One of the most eyecatching updates in this year's Book 1 of the Tattersalls October Sale belonged to lot 58, a Muhaarar half-sister to leading juvenile filly Fairyland, who added the Lowther Stakes and, more importantly, the Group 1 Cheveley Park Stakes to her race record after the entries were unveiled.

Those updates had not gone unnoticed as a host of interested parties followed the April-born foal into the ring, with Form Bloodstock's Jehan Malherbe and Lordship Stud's Trevor Harris lasting deep into the play, but it was Shadwell's Angus Gold who landed the spoils with a bid of 925,000gns delivered from the stairs to auctioneer Simon Kerins' left.

Fairyland set a new high mark for the progeny of Kodiac when fetching 925,000gns from MV Magnier, Mayfair Speculators and Peter and Ross Doyle at last year's Book 1, and her Muhaarar half-sister became the most expensive offspring from her own sire's debut crop when fetching the same price.

"She's a sister to a gorgeous filly who's probably the nicest yearling I saw last year - a beautiful filly who's now a Group 1 winner," said Gold. "She's out of a very good mare and is obviously by a horse we stand." 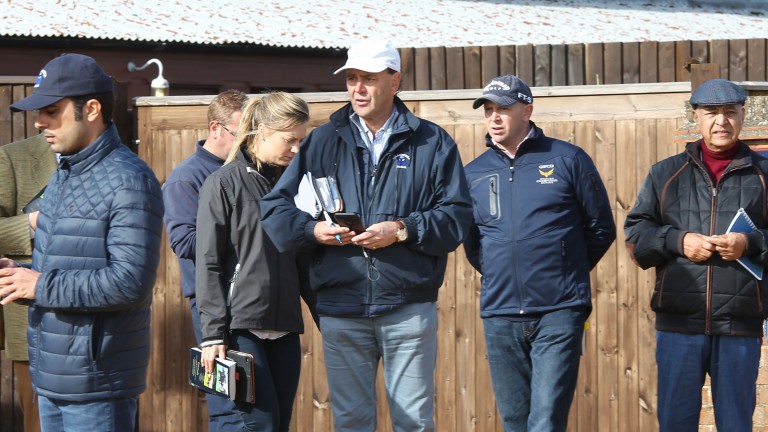 Angus Gold (white cap): "I've seen a lot by the sire and we've liked what we've seen"
Laura Green
Bred by Tally-Ho Stud, the Muhaarar filly is out of the Pivotal mare Queenofthefairies, a half-sister to Dream Ahead who was purchased by the O'Callaghans' operation for a mere 32,000gns in July 2010.

Queenofthefairies has produced three winners, including Now Or Never, who got his head in front in the Group 2 Blazer Stakes in Australia and the 2016 Derrinstown Stud 1,000 Guineas Trial.

Gold went on to highlight the high esteem in which Muhaarar is held by those at Hamdan Al Maktoum's Shadwell operation, saying: "For us he's the most exciting horse. When he retired to stud I said to Sheikh Hamdan that he's our chance of getting a Green Desert type.

"He had looks, was well bred, was fast and had a great attitude - a very talented horse. Who knows what will happen, but he's got as good a chance as we'll ever get of coming up with a good stallion.

"I've seen a lot of yearlings by the sire and we've liked what we've seen, we've got some lovely ones at home on the stud. I've liked what I've seen here particularly."

Muhaarar, an exceptional sprinter who won the Commonwealth Cup, July Cup, Prix Maurice de Gheest and the British Champions Sprint Stakes, has stood his first three seasons at Nunnery Stud at a fee of £30,000.

The son of Oasis Dream's second-most expensive yearling, a €500,000 filly out of Beach Bunny, was bought by Shadwell at last week's Goffs Orby Sale.

FIRST PUBLISHED 3:09PM, OCT 9 2018
When he retired to stud I said to Sheikh Hamdan that he's our chance of getting a Green Desert type

How Covid-19 is giving an inadvertent boost to bloodstock sales around the world Fasig-Tipton the first thoroughbred sales company to accept cryptocurrency 'Our most exciting horse in a long time' - plans set out for electrifying Baaeed Nerves and excitement for Ballybin Stud as Suesa's sibling heads to Book 2 'I'm looking forward to a new chapter' - Martin Buick joins De Burgh Equine 'All the support is unbelievable' - Johnny Hassett fundraiser hits €250,000 mark