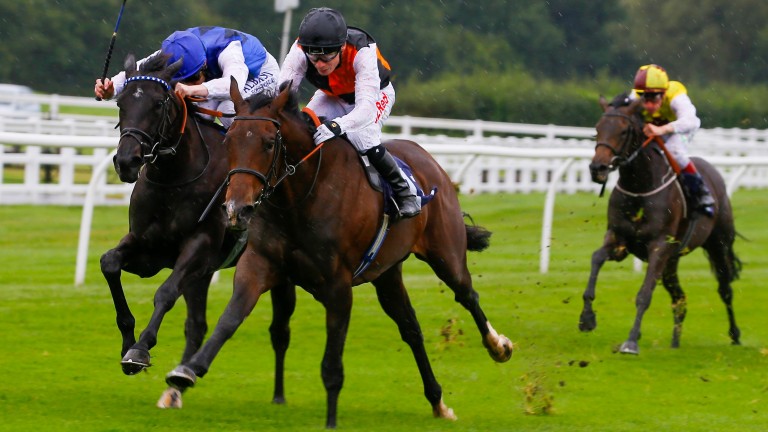 Teppal (black cap) runs out the cosy winner of a Lingfield maiden to initiate a five-timer for her sire Camacho
Mark Cranham
1 of 1
By James Thomas UPDATED 7:23PM, SEP 1 2017

The race to be leading European two-year-old sire by number of winners is all but over, with Kodiac having registered 35 juvenile winners and counting in 2017. The biggest question over the Tally-Ho Stud kingpin is now whether he can turn a great season into a record-breaking one.

However, the contest to claim a coveted top ten spot in this particular table is proving far more competitive. Kodiac's studmate Zebedee, the dazzling Dark Angel and surprise package Poet's Voice have likely done enough already to figure among the leaders come the end of the season, and this week's action has seen another interesting contender emerge in the shape of Camacho.

The Yeomanstown Stud resident enjoyed a white hot spell this week which yielded five two-year-old winners during a 24-hour period. Among that number are four new winners, taking his tally of juvenile scorers to 15 in 2017: a figure that puts him in seventh place on the European two-year-old sires' table by volume of winners..

The David Simcock-trained filly Teppal initiated the five-timer when she displayed a great deal more ability than the winning distance suggests by landing an ordinary 7f Lingfield maiden by a neck. Having cost Blandford Bloodstock €105,000 from the Arqana Breeze-Up, where she was purchased from Con Marnane's Bansha House Stables draft, the scopey May foal looks well worth following.

Marnane's fingerprints were also on Camacho's second two-year-old winner of the week, with Good To Talk taking his fourth race of the season in a 6f Deauville claimer. A €9,500 pinhook by the master of Bansha House, the colt sports the Different League colours of his wife Theresa, having been bought back at £17,000 at the Goffs UK Breeze-Up Sale.

Just 30 minutes after Teppal's success, Camacho brought up a hat-trick with Dream Of Delphi, who made a winning nursery debut by three and a half lengths over 7f at Lingfield.

After a comparatively barren few hours, Abamanova brought up the Wednesday four-timer with an easy all-the-way success in a 5f Bellewstown maiden. She looks well worth a crack in Pattern company, with targets like the Firth of Clyde Stakes bound to be on her agenda.

The remarkable run of successes was completed by the David O'Meara-trained Debawtry, who overcame a troubled run to land short odds in a Musselburgh maiden over 5f on Thursday.

This year's two-year-old crop are the first bred during Camacho's second stint at Morristown Lattin Stud, which began in 2014 at a career-high fee of €7,500.

Having escaped the indignity of an engagement at the 2012 Tattersalls December Breeding Stock Sale, Camacho spent 2013 leased to Richard Kent's Mickley Stud in Shropshire. But during that season his fifth crop of juveniles burst into life, and on the back of a campaign that included five stakes winning two-year-olds, the O'Callaghans decided to recall the close relation to Showcasing to their roster.

That decision has been fully justified, as in 2014 he covered 107 mares, with the resulting crop comprised of 88 foals that are now operating at a winners-to-foals ratio of 17 per cent and a winners-to-runners ratio of 35 per cent.

Moreover, Camacho looks to have a host of unraced juveniles whose pedigrees suggest they ought to be winners in waiting. Chief among those is Cintra, a three-parts sister to the ill fated four-time Group 1 winners George Washington who is registered with Weatherbys as being in training in Newmarket with William Haggas.

There is also Macho Mover, a half-brother to the Listed winner and Grade 1 Arlington Million runner-up Fanciful Angel, a 50,000gns purchase by Gill Richardson at Book 2 of Tattersalls' October Sale now in training with Mick Channon. Lever Park, a half-sister to tough and talented sprinters Tax Free and Inxile, is in the care of Bryan Smart having been secured for 52,000gns by Oliver St Lawrence and the Armstrongs’ Highfield Farm earlier this year.

And, of course, there are a number of juveniles who have already run to a level that entitles them to shed their maiden tag sooner rather than later, including the likes of Story Minister, Lady Anjorica, Betsey Trotter and Sinaloa - who lines up at Hamilton on Friday evening.

The stallion career of Camacho may taken something of an unorthodox trajectory to this point, but with his bigger and more expensively bred crops starting to yield a slew of winners, it looks as though the only direction he'll head from hereon in is up.