Dubawi and Frankel among the exciting sires due to be used 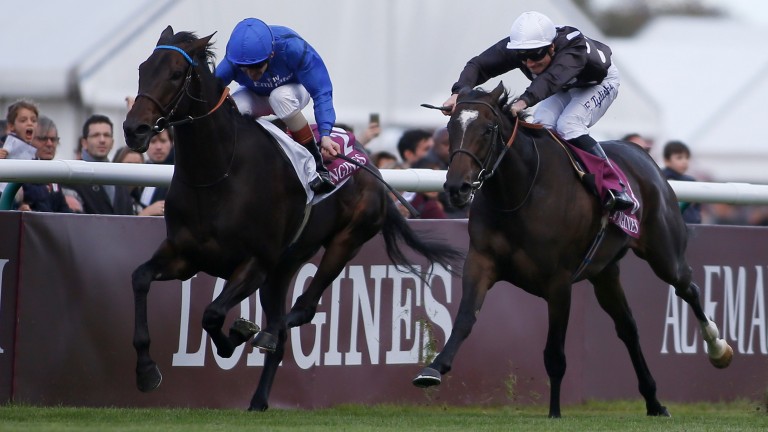 After glittering success on the track and in the sales ring in 2016, the broodmare band at Meon Valley Stud in Hampshire are set for a date with some of Europe's leading stallions this year.

The last 12 months provided many highlights for the Weinfeld family's operation including Speedy Boarding landing both the Prix Jean Romanet and the Prix de l'Opera at the highest level, while at Book 1 of the Tattersalls October Yearling Sale there was further success when Zee Zee Top's Dubawi colt was bought by Shadwell for 2.6 million guineas.

Zee Zee Top, who also won the Prix de l'Opera and hails from the stud's famous Reprocolor family, was rested last season and is now set to be covered by Haras de Bonneval's exciting young sire Siyouni, who in turn is a son of Cheveley Park Stud stalwart Pivotal.

Mark Weinfeld, who manages and part-owns the stud with his sister Helena, said: “Siyouni is a son of Pivotal and that cross has worked with the family before. On the female side there is Danehill and we had Jazzi Top [by Danehill Dancer] who was very nearly a Group 1 winner.

“Physically I think it'll suit too as she can tend to throw large foals now and he's not too big as a stallion. When she first started breeding she threw small foals and now they can be larger ones so we have to be careful. Siyouni looks like an exciting young sire and he hasn't done much wrong yet.”

Jazzi Top, a five-year-old daughter of Zee Zee Top, has joined the Meon Valley broodmare band and has had Pivotal chosen for her first mating.

Weinfeld said: “We thought that would suit her quite well. Jazzi Top is quite a light framed horse and this cross in the family has produced Izzi Top, so it seemed worth a try. We've had huge amount of luck with Pivotal and he's a stallion who seems to work very well with that Reprocolor line.”

Pivotal is also the sire of the stud's dual Group 1 winner Izzi Top. Her first foal Dreamfield, a son of Oasis Dream bought by John Ferguson for 1.1m guineas at Book 1 of the Tattersalls October Yearling Sale in 2015, got his career off to the perfect start when landing a 6f maiden at Nottingham by a devastating eight lengths in October.

Making a second reappearance for John Gosden two weeks later at Newmarket, he stretched his unbeaten run to two races and looks an exciting prospect for 2017.

Last year Izzi Top was one of the mares among the first book of mares for sprint sensation Muhaarar and after she delivers a foal by the son of Oasis Dream in April she will visit Banstead Manor Stud's dual world champion Frankel.

“We know that Pivotal has worked with the Galileo line and we thought the exciting Frankel was the perfect option as he looks like he's going to be the business," said Weinfeld.

“Every time I go see him walking up and down at Juddmonte he really stands out. We've used him most years and we've got a three-year-old filly called Fizzi Top in training with John Gosden.”

As reported in October, dual Group 1 heroine Speedy Boarding is in line to visit Darley's flagbearer Dubawi having been retired from racing at the end of the season. The five-year-old daughter of Shamardal hails from the One In A Million line, another of the Weinfelds' founding families.

Of the decision to send Speedy Boarding to Dubawi, Weinfeld added: “That cross has worked quite well on a couple of horses and I just felt that you've got to send a top-class mare to Dubawi.

“Physically it'll suit as Speedy Boarding is on the large side, quite tall and leggy, and Dubawi is a bit more compact. He and Galileo are the best two stallions around.”

Speedy Boarding's dam Dash To The Front, who was barren to Golden Horn last year, will now head to Ballylinch Stud to be covered by Lope De Vega.

Weinfeld said: “Being a son of Shamardal, Lope De Vega seems worth a try for the mare. I've always liked Lope De Vega's stock and I first saw some at Deauville and thought they looked lovely strong horses.

“Unfortunately Shamardal is no longer available so Lope De Vega looks a very good option. Physically I think it suits very well and we're also sending Miss Dashwood, a half-sister to Speedy Boarding, to him as well.”

Listed winner Dash To The Top, a Montjeu half-sister to Dash To The Front, was barren last year and will now head to Coolmore to be covered by Fastnet Rock, while Oaks runner-up Shirocco Star, an eight-year-old daughter of Shirocco in foal to Dubawi, will visit Frankel after foaling later this month.

Galaxy Highflyer, a 13-year-old daughter of Galileo who will deliver a foal by star miler Kingman later this month, has had Highclere Stud's Paco Boy chosen as her next mate.

“That Galileo cross with Paco Boy has worked very well as it's produced Galileo Gold and having seen it work very well a couple of times we just felt we'd give it a go," said Weinfeld.

“Size-wise I think it'll suit as she's quite a big mare and he's quite a neat horse. It seemed a good option as the mare also produced a useful horse by Oasis Dream a couple of years ago called Oklahoma City. It's a similar line and it's all going back to Green Desert, which has often worked well with the Reprocolor family.”

FIRST PUBLISHED 6:46PM, FEB 12 2017
Physically it'll suit as Speedy Boarding is on the large side, quite tall and leggy, and Dubawi is a bit more compact. He and Galileo are the best two stallions around