Expensive buy Declarationofpeace off the mark in style

Son of War Front was bought for $2.6 million as a foal 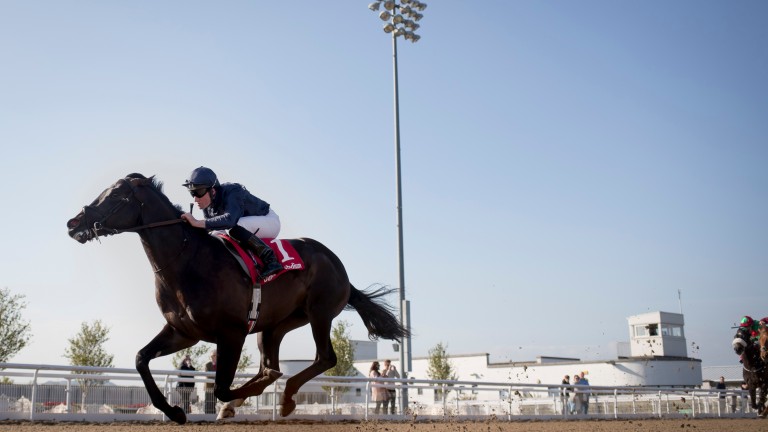 Declarationofpeace: saunters to victory at Dundalk on Wednesday
Patrick McCann
1 of 1
By Zoe Vicarage 9:19PM, MAY 10 2017

Pricey foal purchase, Declarationofpeace, shed his maiden tag at the second time of asking on Wednesday evening with a commanding performance to win by six lengths in a five furlong contest at Dundalk.

Trained by Aidan O'Brien and ridden by Seamie Heffernan, the colt tracked the leaders in the early stages before making improvement two furlongs from home. Once hitting the front, he showed an impressive turn of foot to pull clear to win the race.

He had finished third on his debut last month when contesting a six furlong maiden at Navan which was won by the Ken Condon-trained Romanised.

A son of War Front, the juvenile was bought as a foal by MV Magnier for $2.6 million at the Keeneland November Breeding Stock Sale in 2015. The sum paid saw him become the second most expensive foal sold at that year's auction.

Declarationofpeace was bred by Dell Ridge Farm and Hill 'n' Dale out of the Listed-placed Storm Cat mare Serena's Cat. He is a half-brother to dual Grade 1 scorer Honor Code - who stands at Lane's End Farm in Kentucky and has his first foals this year - and to Grade 2 winner Noble Tune.

Serena's Cat is a half-sister to dual Group 3 winner Vocalised and is from the family of champion US three-year-old filly and prolific Grade 1 scorer Serena's Song. Retired to the paddocks she went on to produce ten winners from 13 runners including Group 1 heroine Sophisticat.

FIRST PUBLISHED 9:19PM, MAY 10 2017
He is a half-brother to dual Grade 1 scorer and Lane's End Farm resident Honor Code