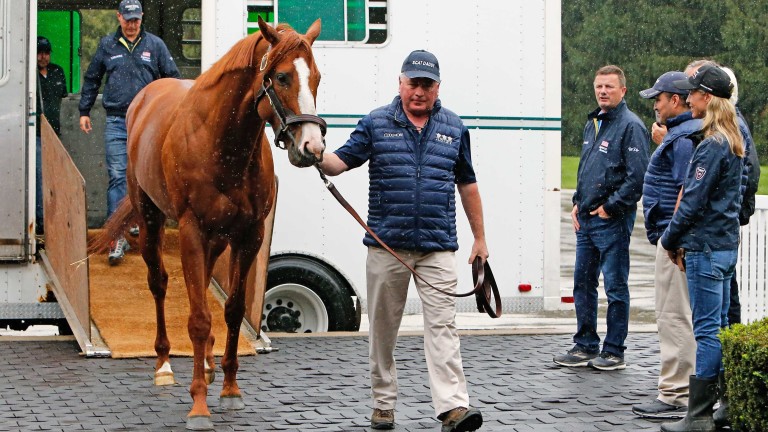 Ashford stallion manager Richard Barry leads Justify off the van as stud manager Dermot Ryan (left of the group on the right) and breeder Tanya Gunther (right), among others, look on
Michele MacDonald
1 of 1
By Michele MacDonald UPDATED 9:53AM, SEP 18 2018

Stepping off a van in the same kind of steady rain that marked much of his Triple Crown campaign, Justify arrived at Coolmore’s Ashford Stud in Kentucky on Monday morning to a hero’s welcome and a deep bed of straw in the stall of former leading international sire Giant’s Causeway.

Awaiting him in the first phase of his new career, starting in February, will be up to 40 to 50 mares owned by Coolmore principals and partners, who believe the brilliant son of Scat Daddy can carry on the performance of his late sire with top progeny in Europe and America, on turf and on dirt.

“If we breed him to our good Galileo mares, our good Montjeu mares, our good Danehill mares, I think he’s got a lot of options for us. So, a lot of our good European mares will come over to visit him,” said Ashford’s Adrian Wallace. 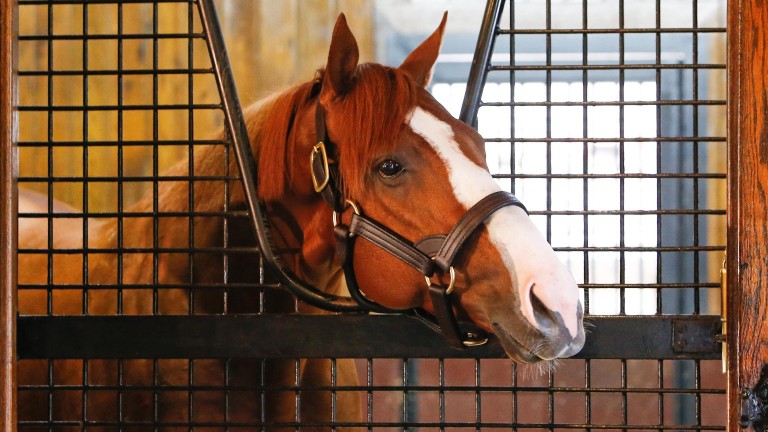 Wallace also expects “some of the best international breeders” to supply mares in a book that likely will exceed 200 if the same path Ashford took with American Pharoah in his first season at stud is followed.

Coolmore, which was due to announce a 2019 stud fee for Justify a few hours after his arrival at Ashford, now will have the distinction of becoming only the fourth operation in history to stand two Triple Crown winners at the same time.

But the robust chestnut is a more intense individual, as trainer Bob Baffert light-heartedly cautioned Ashford stallion manager Richard Barry as Justify arrived at the Ashford breeding shed, where a bevy of media and cameras greeted him.

“You’re going to have your hands full,” Baffert said with a chuckle. “He’s no Pharoah.”

But Justify, who is known for his calm professionalism as well as his alpha male personality, did not “turn a hair,” as Wallace noted after his short journey from WinStar Farm, where the colt had been sent to rest after an end was called to his racing career in late July due to swelling in an ankle. WinStar campaigned Justify with partners China Horse Club, SF Racing, Starling Racing and Head of Plains Partners.

“He’s a very, very classy horse,” said Wallace, who described the distinction for Ashford as the new home of both Justify and American Pharoah as “quite sort of astounding.

“Of 13 Triple Crown winners, there have been four farms that have now stood two. To fall into the same bracket as Claiborne, Calumet and Spendthrift is a great honour for us,” he said. “It’s a huge responsibility to this industry, and it’s one we don’t take lightly.” 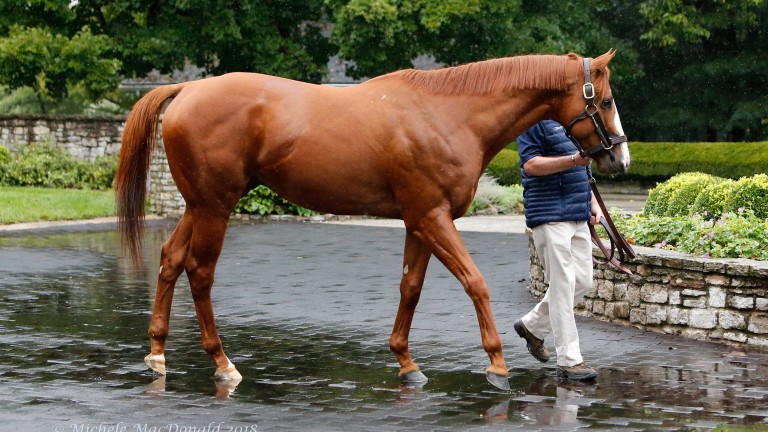 Justify struts his stuff in the rain, conditions he is accustomed to
Michele MacDonald

Joining Baffert and Coolmore officials including Ashford manager Dermot Ryan as Justify arrived at Ashford were his breeders, John Gunther and his daughter, Tanya Gunther, and a number of their staff from their nearby Glennwood Farm, where Justify was born and raised.

“It’s a huge deal for us. We’re a small farm, 20 to 30 mares, so to have bred a Triple Crown winner from our farm, which is just around the corner, it’s just amazing,’’ said Tanya Gunther, who petted Justify on the nose with tears in her eyes.

“And for everybody at the farm, I wanted them to be here to see him - I feel like it’s him coming home. The mare [Stage Magic] was mated in this breeding shed and we’re just kitty corner to Ashford. So, we’re delighted to see him come here and to be able to come and visit whenever we want,” she added.

Gunther said she already has mares in mind to visit Justify in the upcoming breeding season.

Justify will have plenty of time to relax in his new surroundings before beginning his next job or even meeting the tourists Ashford allows to visit on organised tours.

“He’s going to settle in,” Wallace said of plans for the near future. “WinStar has done a great job with him over the last six weeks. He’s let down and put on a bit more weight since he retired from the track.

“Over the next few weeks, we’ll get to know him, he’ll have some time out in his paddock, some breeders will start coming to see him in the coming days and weeks, and then over the next few weeks and months we’ll start getting together his first book of mares to start covering in February,” he continued, promising that Justify’s initial book will be stellar.

“We just want to give him time to relax, get used to his new surroundings and get ready for his life as a stallion,” he said, explaining that the colt probably won’t be shown to casual visitors for another month or so.

While Baffert admitted that American Pharoah holds a special place in his heart because of his kind and gentle demeanour, he praised Justify as also being a quintessential racehorse.

“To me, he’s always been the ultimate looking thoroughbred,” Baffert declared. “Physically, mentally he’s everything we look for in a horse.

“Physically, he’s just so imposing and he’s always been that way from day one. When he was on the track, he stood out amongst them all. He’s a man among boys. He was a relentless competitor; he did not want to lose, whether it was in the morning or afternoon. He was just an incredible racehorse.”

With Justify being by a sire whose offspring performed on dirt and turf and out of a Graded stakes-placed mare by the speed Ghostzapper, Baffert said he believes Justify “has the pedigree” to back up his racing performance and thus has an exceptional chance to match his racing feats at stud.

“I think he’s going to be like Scat Daddy,” Baffert said, who was reunited with his prospective champion, whose entire six-race career was completed in 112 days, for the first time since the colt left his Santa Anita Park barn.

“It was sort of a pretty sad day when he left but it’s good to see him again. He hasn’t changed. He’s full of himself. He’s always been like that,” Baffert said. “He knows he's the man. There’s something about him - that dominance. He walks into the barn and he lets all the horses know. When he was working, I’d work other horses with him and they’d come up to him and just lose interest. He gives that out -there’s something about him.

“I’m sure if he was in a field with a bunch of stallions he’d be the guy. He would rule the paddock,” Baffert said.