Exciting newcomers to line up at Saint-Cloud on Monday

Straight Shooter was a €400,000 Arqana yearling 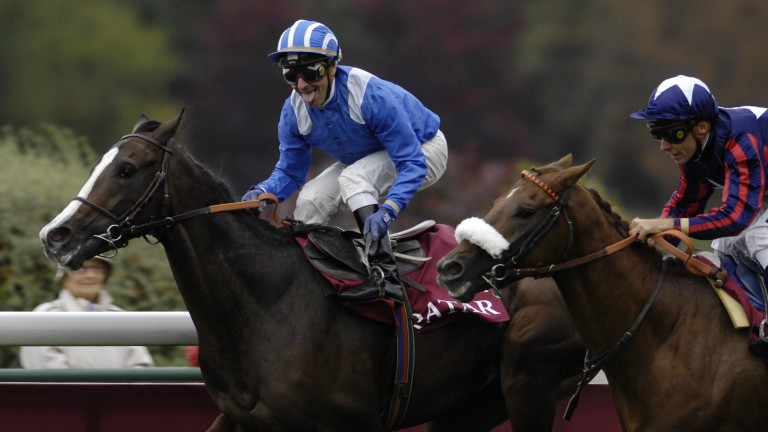 While the Prix Ganay for four-year-olds and upwards may be the highlight of Monday's card at Saint-Cloud, there are a trio of regally bred newcomers in the pair of three-year-old maidens.

Perhaps the most eye-catching of these is Frankel's runner Straight Shooter, who is one of nine declared for the mile Prix Pas de Deux for unraced colts and geldings (1.50pm BST).

Bred by Serge Boucheron, the Andre Fabre-trained Straight Shooter is out of the unraced Machiavellian mare Straight Lass, who has already produced 2008 Prix Jean-Luc Lagardere scorer Naaqoos - he was disqualified to sixth in the Poulains a year later - and Group 3 winner Barastraight.

Straight Shooter was a €400,000 Arqana yearling purchase for Mayfair Speculators and Peter Doyle, and the colt is entered for both the Prix du Jockey Club and the Grand Prix de Paris.

The Markus Jooste-owned colt, who will be ridden by Pierre-Charles Boudot, is the 11th of 12 foals out of Straight Lass, who also has a yearling Invincible Spirit filly.

Cunco and Eminent have both flown the flag for Frankel in Group 3 company in recent weeks, while the latter is a live contender for Saturday's Qipco 2,000 Guineas.

Half an hour earlier, the mile Parade D'Amour for unraced fillies will see ten debutantes line up (1.20pm BST).

Bred and owned by Fair Salinia, Speciality is by Lawman out of the Peintre Celebre mare Pride, whose best runs saw her finish second in Rail Link's Arc and win three top-flight races in three different countries - the Champion Stakes, the Grand Prix de Saint-Cloud and the Hong Kong Cup.

The 17-year-old mare has produced eight foals to date including Group 2 winner One Foot In Heaven, and also has a two-year-old Reliable Man colt named Chairman's Choice and a yearling Kingman filly named Queen.

Bred by Viktor Timoshenko, Ibiza is by Redoute's Choice out of the Kingmambo mare Olga Prekrasa.

Ibiza was a €100,000 buyback for Haras du Quesnay at the same sale as Straight Shooter.