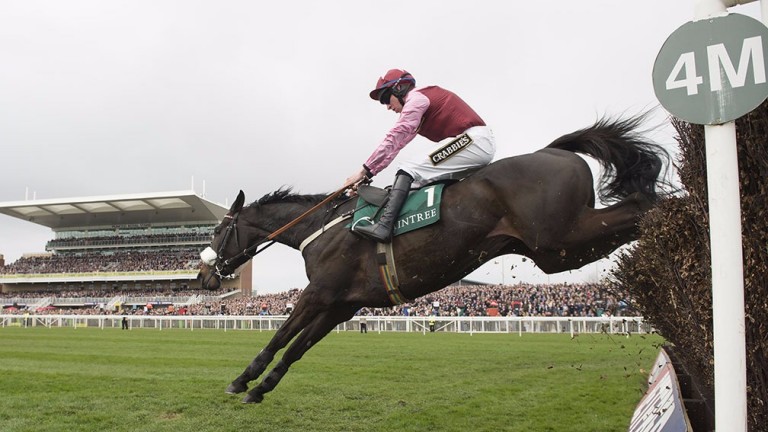 Arzal: son of Vendangeur clears the last in the Grade 1 Manifesto Novices' Chase
Edward Whitaker (racingpost.com/photos)
1 of 1
By Martin Stevens 11:10AM, FEB 7 2017

Vendangeur, a sire gaining momentum with a number of exciting jumps progeny, has been snapped up to stand in Ireland.

The 14-year-old son of Galileo has been bought by a syndicate of investors, having been sourced by Kenneth Cullinane of Woodlands Stud. He will stand at Alastair Pim's Anngrove Stud in County Laois, with his fee to be announced later this week.

Vendangeur won the Group 2 Prix de Chaudenay for his owners the Wildenstein family, who bred him from their high-achieving family of Vallee Enchantee, Vespone and Volga.

He has stood at chickenfeed fees in France but has managed to make his mark, most notably with last year's Grade 1 Manifesto Novices' Chase winner Arzal, who sadly died weeks after his victory at Aintree.

Vendangeur is also the sire of Chateau Conti, the impressive winner of a Cork maiden hurdle on his debut for Willie Mullins last month, and Barra, a mare saddled by Gordon Elliott to win a Fairyhouse maiden hurdle by 12 lengths in recent weeks too.

In a fine month for the sire, he was also represented by the Warren Greatrex-trained Warwick bumper winner Cirano De Sivola.

"I'm delighted to be involved," said Vendangeur's new custodian Pim. "He's a stallion I've been following for a while. He's doing extremely well, as the sire of Arzal and two Cheltenham hopefuls from the yards of Willie Mullins and Gordon Elliott.

"I expect he'll hit the ground running and will be well supported by Irish breeders."

Cullinane reported that Vendangeur has received attention from British breeders as well.

"Being by a world champion sire in Galileo and himself a champion stayer, he should appeal greatly to commercial breeders both sides of the Irish Sea," he said. "He has numerous bookings from Britain already."

Vendangeur joins Aiken and Tobougg on the roster at Anngrove Stud, which recently bade farewell to another French import in Robin Des Pres.

FIRST PUBLISHED 11:10AM, FEB 7 2017
Being by a world champion sire in Galileo and himself a champion stayer, he should appeal greatly to commercial breeders both sides of the Irish Sea