Excelebration gets one up on Frankel in next generation clash 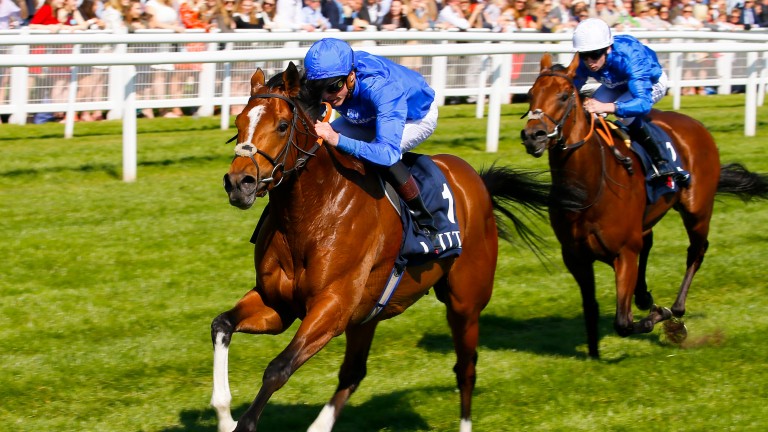 Excelebration was a top-class racehorse but had the misfortune of being born in the same year as Frankel and finished behind the unbeaten dual world champion in five races.

The first of those occasions was in the Group 3 Greenham Stakes, so it was fitting that Excelebration finally got one up on his great rival in this year's edition at Newbury on Saturday.

Excelebration's son Barney Roy and the Frankel colt Dream Castle, both coming into the race as once-raced maiden winners, drew clear of their rivals in the final two furlongs of the Classic trial and it was Barney Roy who asserted, finishing two lengths clear of Dream Castle at the line.

Barney Roy – trained by Richard Hannon for Godolphin, who bought him privately after he won on his debut at Haydock last year - becomes the first stakes winner and fourth black-type performer overall for Excelebration, while Dream Castle becomes the 11th black-type performer for Frankel, who has already amassed seven stakes winners including this week's Craven Stakes scorer Eminent.

Excelebration, a son of Exceed And Excel who won the the Prix du Moulin, Prix Jacques le Marois and Queen Elizabeth II Stakes when Frankel was out of the way, stands at Coolmore at a fee of €10,000 – which could look start to look good value, considering he started out at €22,500 and Barney Roy is now among the leading fancies for the 2,000 Guineas next month.

He is the first foal out of the Galileo mare Alina, a three-parts sister to lowly 1m1½f winner Lucent Dream out of Cheyenne Star, winner of the Ridgewood Pearl Stakes over a mile and the Brownstown Stakes over 7f.

Cheyenne Star is a half-sister to Boa Estrela, the dam of globe-trotting top sprinter Gordon Lord Byron, and is from the immediate family of high-class Italian miler Charita.

Alina, who was purchased by Eliza Park International for 65,000gns at the Tattersalls December Breeding-Stock Sale in 2013, has a two-year-old filly by Dark Angel called Wisdom Mind owned by her breeder and in training with National Defense's handler Criquette Head-Maarek.

The dam also has a yearling filly by Kodiac and was covered by Free Eagle last year.

Barney Roy was purchased from Tattersalls as a foal by AT Bloodstock for 30,000gns and was re-offered by Castletown Quarry Stud at the Goffs UK Premier Yearling Sale, where he was bought by Peter and Ross Doyle for £70,000.

Excelebration was also a Doncaster yearling graduate, in his case bought by trainer Marco Botti for just £20,000 from the St Leger Sale, the forerunner of the Premier Yearling Sale.

FIRST PUBLISHED 7:11PM, APR 22 2017
The dam also has a yearling filly by Kodiac and was covered by Free Eagle last year