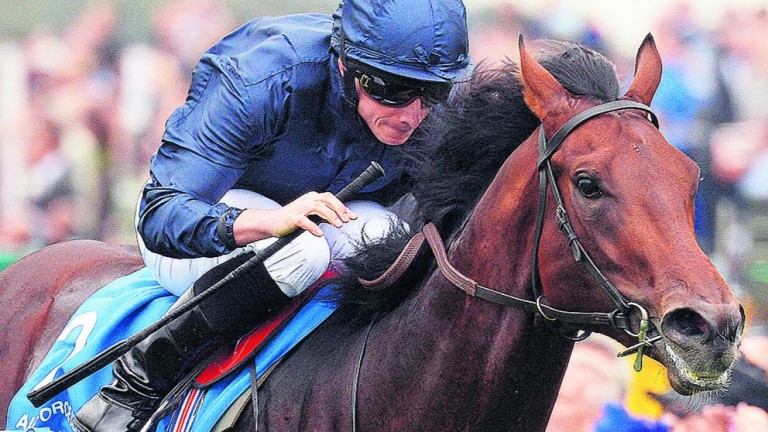 Air Force Blue was a fantastic two-year-old himself and provided a juvenile winner in Florida on Saturday
1 of 1
By Bloodhorse Staff 10:52AM, JUN 7 2020

Beauty Queen closed through the Gulfstream Park stretch on Saturday to score a one and three-quarter-length debut victory and become the first winner for multiple Group 1 scorer Air Force Blue.

It ended up being something of an appropriate day for it, seeing that Air Force Blue's career included him starting odds-on for the 2,000 Guineas at Newmarket, though he was to finish well down the field in the 2016 colts' Classic.

Also the first foal to race for the Ashford Stud sire, Palm Beach Racing's Beauty Queen defeated six other two-year-old fillies in a $44,000 maiden claiming race, for which she was entered for a $50,000 tag but was not claimed.

The Carlos David-trained filly retained her focus after encountering traffic on the backstretch in fifth and closed quickly to take command down the stretch under Cristian Torres.

Air Force Blue, a son of War Front  bred by Stone Farm out of the stakes-placed Maria's Mon daughter Chatham, was trained by Aidan O'Brien for the Coolmore partners.

He captured the Dewhurst Stakes at Newmarket and the National Stakes and Phoenix Stakes at the Curragh during his first season, which culminated with him being crowned European champion two-year-old. He stood the 2020 season for a $15,000 fee.

His three-year-old campaign proved disappointing as he was also beaten in the Irish 2,000 Guineas after his defeat at Newmarket, and then finished midfield in the July Cup before ending his career with a last-paced finish in the Phoenix Sprint Stakes at the Curragh.

Beauty Queen, who was bred in Florida by Hallmarc Stallions out of the Medaglia d'Oro mare Beautiful One, was a $14,000 RNA (reserve not attained) at the 2019 Ocala Breeders' Sales October Yearling Sale. Her dam has produced four winners from five to race and hails from the family of UAE 2,000 Guineas winner Fore Left and Grade 2 winner Synchrony.