Estidhkaar to stand at Tara Stud in 2017

Son of Dark Angel will stand alongside Alhebayeb 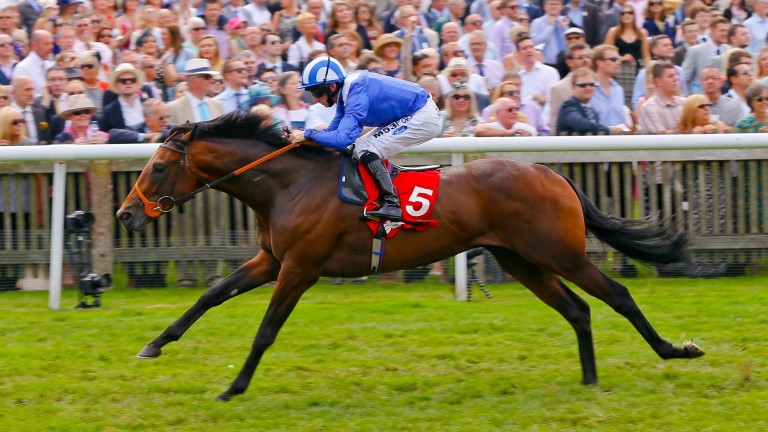 Estidhkaar is to take up stud duties at Tara Stud in County Meath for the 2017 breeding season and will stand at a fee of €5,000.

The son of the highly successful Dark Angel was trained by Richard Hannon for Sheikh Hamdan Al Maktoum and recorded four victories at two to four.

His three Group and Listed victories included the Group 2 Champagne Stakes at Doncaster when beating Belardo under top-weight and the Group 2 Superlative Stakes at Newmarket which he won by four and a half lengths as a two-year-old.

He also won the Listed Ben Marshall Stakes at Newmarket on his final start this season.

Another notable performance by Estidhkaar was when he ran a neck second to champion sprinter Muhaarar in the Group 3 Greenham Stakes.

Estidhkaar was bred by Jimmy Murphy's Redpender Stud and fetched £200,000 as a yearling when purchased by Peter and Ross Doyle Bloodstock on behalf of Shadwell at the DBS Premier Yearling Sale.

He is out of the Dantime mare Danetime Out, who is also the dam of the European champion two-year-old and National Stakes winner Toormore. He is set to stand at Darley's Dalham Hall Stud next year.

Derek Iceton, manager of Tara Stud, stated that he was pleased to have secured Estidhkaar and that Shadwell were retaining shares in him.

He said: “The former Hamdan Al Maktoum and Richard Hannon trained Alhebayeb [also by Dark Angel] has been very well supported by breeders at Tara Stud and his first crop of foals sold tremendously well this season.

“The addition of Estidhkaar, is a major coup for the farm and our valued clients and we will be making available a limited number of shares to breeders. The sale was brokered by John Walsh Bloodstock.”

FIRST PUBLISHED 12:18PM, DEC 16 2016
The addition of Estidhkaar, is a major coup for the farm and our valued clients and we will be making available a limited number of shares to breeders