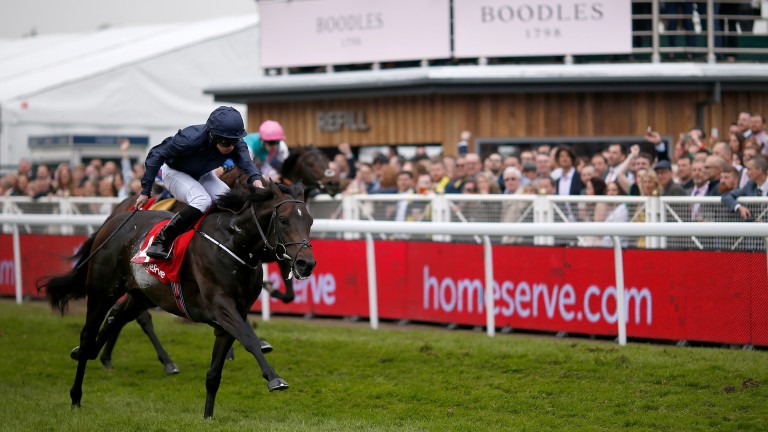 One of the running themes of the 2016 turf season was the absolute domination of Galileo, and on the evidence provided during the Guineas and Chester May meetings it looks suspiciously like the Coolmore kingpin has picked up precisely where he left off.

During the week in which the turf action got serious, Galileo supplied no fewer than seven stakes winners, five of which are from this year’s Classic crop. Chief among that number are Churchill, who landed the 2,000 Guineas, and Winter, who claimed the fillies’ equivalent, along with gutsy Derrinstown Stud Derby Trial victor Douglas Macarthur, Chester Vase victor Venice Beach and determined Dee Stakes scorer Cliffs Of Moher.

The Derby and Oaks are a little over three weeks away, and a glance through the entries for the Epsom Classics gives a further indication of the dominance Galileo looks set to exert over the 2017 season.

There may still be 135 remaining entries in the Derby, but Galileo boasts an incredibly strong hand, as 31 of those - 23 per cent - belong to the sire colossus. If evidence were needed to show that this is not just the result of a scattergun approach, ante-post betting with certain firms has six of Galileo’s sons among the ten shortest prices.

Moreover, Galileo’s Derby influence is not confined to his sons entered in the race, as he is also the paternal grandsire of a significant percentage of the other entrants.

The second most heavily represented sire in the Derby is Galileo’s magnum opus, Frankel. The Banstead Manor Stud resident is responsible for 15 colts entered - 11 per cent of the possible field - including two of the top five in the betting, the undefeated Derby Trial winner Cracksman and Craven winner and 2,000 Guineas sixth Eniment. 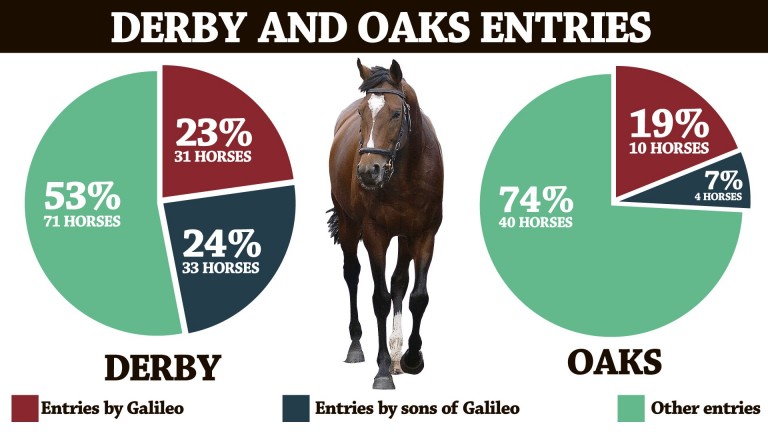 The likes of Nathaniel (5), New Approach (5), Teofilo (5), Rip Van Winkle (2) and the solitary Soldier Of Fortune entrant mean that a further 33 entries are supplied by sons of Galileo.

The sum total of his own and his six sons' Derby entrants is 64, a whopping 47 per cent of the potential field, despite the seven sires combining to make up just 17 per cent of the 42 stallions represented in the race.

The Oaks field may not be quite so saturated with Galileo’s progeny, but his ten daughters entered equates to 19 per cent of the remaining candidates, which is far from an insignificant representation, while the three Nathaniel fillies and sole daughter of Frankel entered take Galileo and his sons' representatives in the fillies’ Classic to 14 - 26 per cent of the remaining 54 possible runners.

Galileo’s Oaks representatives include the 1,000 Guineas one-two Winter and Rhododendron, with the latter a warm order to reverse the form with her Newmarket conqueror. His son Nathaniel also boasts a significant entrant, current second favourite Enable.

With contenders in Saturday’s Lingfield Classic trials, a well as a pair of three-year-old fillies in the Blue Wind Stakes at the Curragh who could yet develop Classic aspirations, Galileo looks highly unlikely to relinquish his grip on the 2017 Classics any time soon.

FIRST PUBLISHED 7:16PM, MAY 12 2017
There may still be 135 remaining entries in the Derby, but Galileo already boasts an incredibly strong hand

'Galileo was the start of it as he was our first Derby winner out of Ballydoyle' Find out how Frankel fuelled the pedigree of runaway Derby hero Adayar Who will win battle of the generations as Galileo and Frankel go head to head?