Enough is enough: will overproduction be tackled by breeders? 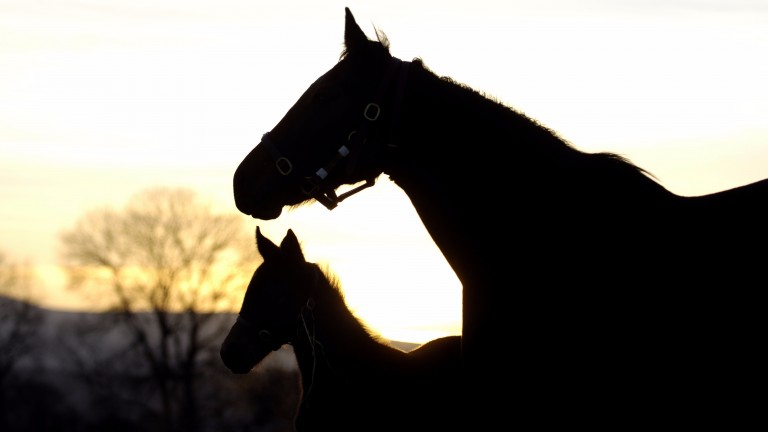 Today marks the traditional, certainly not universally adhered to, start of the thoroughbred breeding season; supposedly when mares start to be covered by stallions so the birth that follows an approximate 11-month gestation period occurs safely after January 1.

After five successive years of growth in production levels, but faltering levels of demand at the sales, the brakes ought to be applied to further expansion in the racehorse population. But will commercial breeders, generally an optimistic bunch, heed the lessons of falling clearance rates at the sales last autumn?

Worryingly, the number of active broodmares rose by eight per cent in Ireland and by one per cent in Britain last year even after the imbalance of supply and demand became patently obvious at the 2015 foal sales.

Surely, only weeks after the 2016 sales season ended with a steep increase in unwanted lots and a polarised market, the harsh reality of overproduction will be obvious and fewer commercially unattractive mares will be bred from.

Speaking to breeders, that generally seems to be the case.

David Powell of Catridge Farm Stud in Wiltshire, which consigns for a number of clients, is certainly taking action.

“I just think there's total overproduction and some of the mares we've got here have got to an age where we probably won't breed from them, so we put four of them down,” he says. “Because what else would you do with them? If I sold them on someone else would have the same problem so I'd rather do th is . We've cut back on the number of mares we're covering.

“We've still got a fair number of mares here and they will be covered. Two of them are in foal and they won't be covered again. I don't know how we can get it across to those people who breed from mares who shouldn't. A lot of them own one or two mares and they are almost like pets. They're the difficult ones to get through to. If the individual wants to carry on doing it then it's their prerogative and that's fine. But we've gone the other way."

Paul Thorman's Trickledown Stud in Hampshire is another boarding and consignment operation with a broad range of clients. He is also cutting bac k - "marginally".

“One or two mares that are finished aren't being replaced ," he says . " I think there's a general feeling we've got to up the quality and for quite a lot of my owners, if they've got five mares and the fifth one is a bit old or is a bad breeder, this year or last year was the time to stop.”

Other breeders, while less enthusiastic about culling, concede there will be greater emphasis on quality over quantity this year.

“We're not cutting back on breeding but we're restricting the amount of money we would spend on certain mares,” says Derek Veitch of Ringfort Stud in County Offaly. “We're being a bit more careful with the bottom ten or 15 per cent of our mares and how we cover them. But we're not stopping the mare, resting her or retiring her.”

Robin Sharp of Suffolk-based Houghton Bloodstock underlines the need to only breed horses who will have an optimum chance of finding new homes.

“We're making a concerted effort to make sure that the mares are going to breed the offspring that will make the sales companies take notice,” he says, “because so many people are breeding horses and can't get in a sale.

“Tattersalls don't want them and if you can't get in Book 1 or 2 of the October Sale, or the first part of Book 3, you might as well say you're losing money straight away.”

Ed Player of Whatton Manor Stud in Nottinghamshire seemed the most optimistic of the breeders we surveyed. Asked if he or his clients would be cutting back on production this year, he replied: “Not at all, if anything we are all looking to expand.”

But he is part of the consensus for quality over quantity.

“ What is clear is we and our clients are being very selective about what mares we breed to and buy when we are reinvesting,” he says. “They either must be very good-looking or have a solid pedigree. If we don't think a filly out of a particular mare will make profit then there is little point breeding to them.

“I think we're all being very careful about what mares we cover at the moment. Unless the mare has bred winners or you have a popular stallion then the produce is increasingly difficult to find a home for let alone sell. If mares are not making the grade it is imperative they are moved on or retired.”

Facing up to the problem

Even if breeders have different ideas of how to tackl e overproduction, there is at least general agreement that a problem exists.

“Overproduction is clearly becoming a major issue again,” says Player. “While the foal crops are still 23-24 per cent below the peak years of 2007-8, the British foal crop has risen by nearly eight per cent in the last three years and the Irish foal crop has risen by over 17 per cent over the same timescale. During this period the demand for thoroughbreds continues to decrease, creating a dangerous imbalance.”

For Powell overproduction is “a massive problem”, while Sharp says the situation is “very dangerous”. Veitch, on the other hand, would rather talk about 'underdemand' than 'oversupply', and a surfeit of poor-quality stock.

“It's a lack of demand coupled with poor quality production at the lower end of the broodmare band,” he says. “ T hose two things are the principal problem. I think it's not an overproduction problem.

"There needs to be a culling process in the bottom 20 per cent of the broodmare band being used for production and there needs to be a rationalisation of every breeding operation based on that theory. Then I suppose there needs to be a bit of a better economical outlook and availability of funding the industry and throughout the economy for the luxury items to be needed in bulk again.”

Opinions vary when it comes to the causes of overproduction.

Powell points to stallion book sizes. “The main thing that's the problem is these Flat stallions who cover more than 200 mares,” he says. “But then again people send mares to them knowing that's what's being done. I certainly won't send a mare to a stallion who's covering 200-plus mares. Years ago everything was restricted - 38 or 42, which is too low now. 200 is an awful lot.”

It's not just book sizes but the volume of stallions on the market that is the issue for Sharp. “Apparently there are 27 new stallions this year; it's ridiculous,” he says. “It's like everybody needs a stallion - why do they need a stallion?

“Out of the new stallions this year, probably only 25 per cent of them should be standing at stud. Some of the stallions shouldn't be in the commercial world standing. If somebody wants to stand a stallion and have a bit of fun, that's entirely up to him. As a commercially viable venture, they've got no chance.”

An insight into how breeders can be lured into sending unsuitable mares to stallions because of the deals available in a competitive marketplace , and thus contribute to the number of unwanted foals , is given by Sharp.

“One of the good things about there being a lot of stallions is you can get a better deal as there are more to go around,” observes the Houghton Bloodstock man. “Hopefully, if they want 150 mares, you'll be able to pin down the stallion owners a little bit.”

Player also points the finger at studs that put tempting offers in front of breeders that enrich the stallion owner but not the breed.

“Certain favourable deals from stallion owners in years two and three are encouraging bad breeding of bad mares - this can only fan the flames of overproduction,” he says.

Veitch bemoans fly-by-night stallions who will sire offspring
that the market will often reject.

“There's too many stallions generally and especially those retired this year,” he says. “I don't think there's a good enough crop of mares for each stallion that's been retired. Some of these stallions will be popular with people and some won't.

“Unfortunately some of the progeny of these stallions won't be popular in two years' time for different reasons that we may or may not foresee at the moment.”

Looking for a cure

Most of the breeders we interviewed have similar views on how to solve the problem of overproduction: stimulating demand with increased prize-money.

“Mark Johnston is absolutely right: when it comes down it, prize-money is the biggest problem,” says Sharp. “If we were racing for £15,000 maidens, so many people would do it.”

Veitch looks outside of the industry to wider economic concerns.

“I think there's a lack of requirement for the luxury item that we produce at the moment, especially comparing it to the really good years in 2006 and 2007,” he says. “Not just the industry, but the economy generally, is suffering in terms of expansion and development because of funding problems through the banks. We still haven't recovered from the worldwide financial crash of the last decade.”

Broken wider economies; insufficient prize-money in racing; horses being seen as a status symbol less by the upwardly mobile : all could be blamed for a lack of demand for young stock at the sales. Similarly, alluring deals from stud owners and larger stallion books have contributed to increased supply. You might throw in the demise of the owner-breeder who would produce as many horses as they were prepared to race and the commercialisation of breeding.

There are innumerable theories for how we found ourselves with around 1,000 Flat yearlings bred for the market who failed to find a new home at the sales last year but the most important thing is that number , which cannot reflect well on the sport , is reduced.

Prize-money is probably the key issue. Perhaps in a post-ten per cent levy paradise there will be greater financial rewards in the lower tiers of British racing that give new owners reason to stay in the game and reinvest.

But until the financial cracks in racing are fixed, commercial breeders need to take individual responsibility for ensuring they create a product that the market actually wants and is likely to buy, and have a Plan B for racing the foal if it fails to find a new home.

Another year-on-year increase in the number of mares covered in Britain and Ireland between this week and early summer would be exasperating and is, hopefully, unlikely.