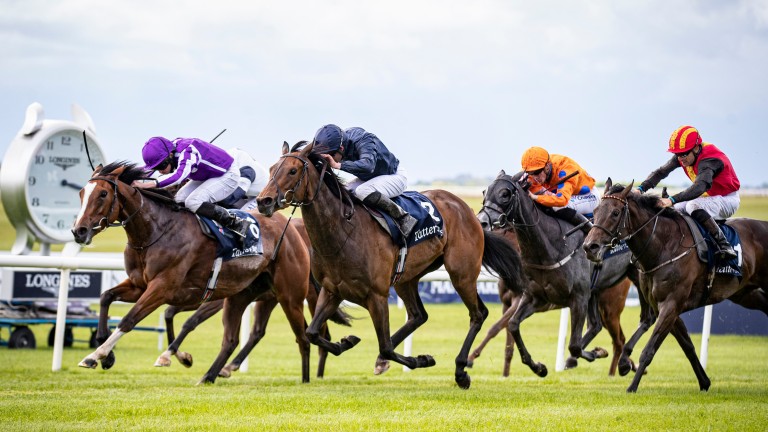 Empress Josephine: daughter of Galileo and sister to the brilliant Minding strikes in the Irish 1,000 Guineas
Patrick McCann
1 of 1
By Kitty Trice UPDATED 4:59PM, MAY 23 2021

Empress Josephine may have left it late but she defended her full-sister Minding's honour when landing the Tattersalls Irish 1,000 Guineas ahead of stablemate Joan Of Arc.

Minding was infamously defeated by a neck when Jet Setting landed the Irish Classic in 2016 but her sister was on hand to give their dam, the wonderful dual Group 1 winner Lillie Langtry, a second Classic winner from her offspring to date.

Lillie Langtry, winner of the Coronation and Matron Stakes and a Danehill Dancer half-sister to the stakes-winning Count Of Limonade, has produced four winners from six runners to date.

Minding - a daughter of perennial champion sire Galileo and the brilliant winner of the 1,000 Guineas and Oaks among seven top-level triumphs - was preceded by her full-sister in Kissed By Angels, the winner of the Derrinstown Stud 1,000 Guineas Trial.

The Ballydoyle-trained Empress Josephine won on her debut at Naas in March and followed up a Leopardstown defeat with a second in a Listed contest at Gowran Park. The three-year-old is one of 16 individual Group 1 winners for Coolmore's champion sire out of Danehill's granddaughters.

She was an astonishing 90th individual top-level winner for Galileo.

Runner-up Joan Of Arc is a full-sister to European champion miler Gleneagles, as well as Group 1 winners Marvellous and Happily, and further enhanced the brilliant record of her dam, You'resothrilling.

The Group 3-winning daughter of Storm Cat - and full-sister to the late supersire Giant's Causeway - is responsible for seven black-type performers from seven offspring to have made the track. Every single one has at least placed or won in Group 1 company.

No Speak Alexander, a daughter of Haras de Bouquetot's second-season sire Shalaa and winner of the Group 3 Athasi Stakes at the Curragh, was third for Jessica Harrington.

Bred by Mountarmstrong Stud, she is the first foal out of Rapacity Alexander, a Listed-winning daughter of Dandy Man and a full-sister to Group 1-winning Hong Kong sprinter Peniaphobia. 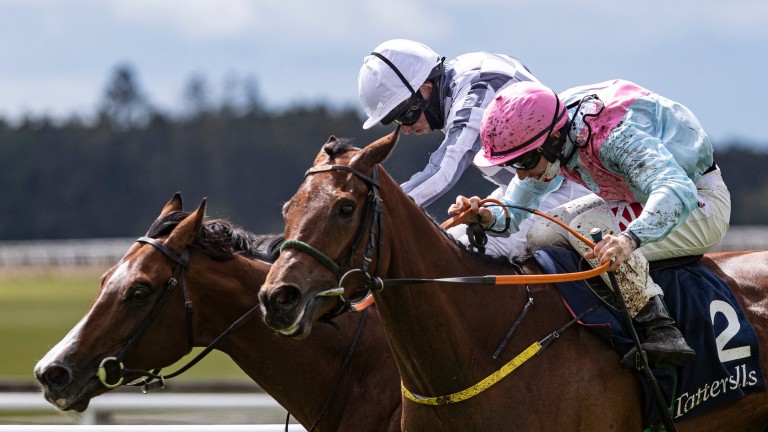 Earlier at the Curragh, the Noel Meade-trained Helvic Dream provided trainer and sire Power with a maiden Group 1 triumph when downing hot favourite Broome in the Tattersalls Gold Cup.

A €12,000 purchase from Portlester Stud at the 2018 Tattersalls Ireland September Yearling Sale when snapped up by Peter Nolan, Helvic Dream had three times finished behind Broome before his revenge in Sunday's top-level prize.

An easy winner of last season's International Stakes at the track in October, the four-year-old gelding was a notable winner for his sire, who is now standing at Oaklands Stud in Australia.

Power, a son of the great Oasis Dream who was bred by Norelands and Hugo Lascelles, won the Coventry and Marble Hill Stakes at two before finishing second in the Phoenix, National and Dewhurst Stakes.

Out of the winning Inchinor mare Frappe, he won the Irish 2,000 Guineas before retiring to Coolmore for the 2013 breeding season. He subsequently relocated to Oaklands Stud in Queensland in 2018.

Helvic Dream is the first foal out of the unraced Danehill Dancer mare Rachevie and is a half-brother to the Camelot filly Flirting Bridge, a close second to Joan Of Arc in the Irish 1,000 Guineas Trial at Leopardstown for Henry de Bromhead.

Will Kinsey looking to the future with the rejuvenated Stormy Ireland

FIRST PUBLISHED 4:37PM, MAY 23 2021
She was an astonishing 90th individual top-level winner for Galileo