James Thomas reports from the concluding session of Book 2 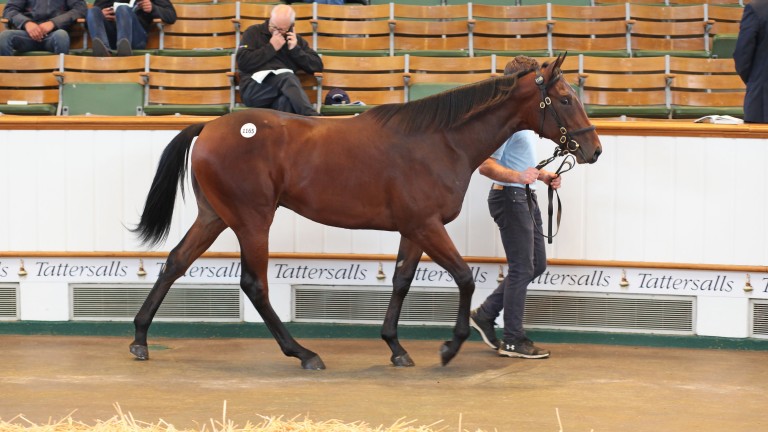 The January transfer window may still be a few months away, but that didn't stop football agent Kia Joorabchian making a major new signing during Book 2 of the Tattersalls October Yearling Sale on Wednesday, as Alex Elliott went to 450,000gns on his behalf to secure a son of crack freshman sire No Nay Never.

Joorabchian has overseen numerous big-money deals for some of the most familiar names in football, including the transfer of Philippe Coutinho from Liverpool to Barcelona earlier this year for a reported £105 million, and his latest signing will see the No Nay Never colt move from the Ballyphilip Stud academy to the Newmarket yard of Michael Bell.

"He's very hard to fault physically and No Nay Never has taken all before him this year. I don't think you can have enough of them," Elliott said of the session-topping yearling, who shares his sire with Middle Park Stakes hero Ten Sovereigns. "He was an absolute standout this week."

The colt joins a growing string of horses owned by Joorabchian, who races under the banner of Amo Racing Limited. During last week's Book 1 sale Elliott secured three lots for the owner – colts by Oasis Dream and Gleneagles also heading to Bell, and a son of Excelebration bound for David Simcock – at a net spend of 900,000gns. 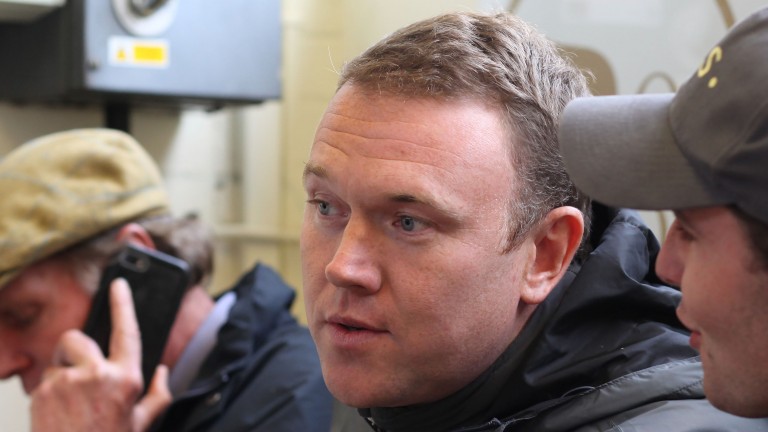 Alex Elliott: "No Nay Never has taken all before him this year. I don't think you can have enough of them"
Laura Green
"He was strong at Book 1," said Elliott. "We put our must-haves on the list and he's given them all a great rattle and got four proper colts. The brief is to find Royal Ascot types and that's where we want to try and get him to. He also owns Polybius, who was fourth in the Wokingham last year.

"We bought a couple of yearlings for him last year too, including Lady Aria who was second in the Dick Poole Stakes."

The transaction provided Ballyphilip Stud – the farm responsible for breeding Harry Angel and Battaash – with a stunning return on the €40,000 it parted with to buy the colt as a foal at the Goffs November Sale.

"He's a fabulous horse, the nicest I've had on the farm since Battaash," said the stud's Paul McCartan of the colt, who is out of a sister to Golden Jubilee Stakes winner Fayr Jag.

"A lot of it has to do with the amazing year that No Nay Never has had though, and it was my wife, Marie, who found him at the sales. She told me then, 'I know the man I'm going home with today, and it's not you!'"

Joorabchian is not the first footballing force to dabble in bloodstock, with Leicester City owner Vichai Srivaddhanaprabha making an increasing impact on the sales ring and on the racecourse with his King Power Racing string, while former Chelsea manager Carlo Ancelotti was recently revealed to be the new owner of Sea Of Class's yearling half-brother by Oasis Dream.

The yearling sale season has already taken in France, Doncaster, Kentucky and Ireland but, despite the gruelling schedule, buyers' appetite showed no sign of waning as Book 2 of drew to a close on Wednesday.

Among those still going strong right until the end was Alastair Donald, who outlasted Matt Coleman with a bid of 420,000gns to secure a Dark Angel colt offered by Whatton Manor Stud late in the session. The colt is a half-brother to Blyton, a two-year-old son of Kodiac who won his third race last Friday to provide his sibling with a timely update.

"I think he was our favourite colt of the whole week," said the purchaser, whose Sackville Donald agency finished Book 2 having secured 3,826,000gns worth of stock.

"He's a stunning colt and has a lot of quality for a Dark Angel. The half-brother is super tough and won again the other day - he's now rated in the 90s. He's got a good pedigree behind him too being out of an Oasis Dream mare."

The sale capped a productive week for Whatton Manor, whose Ed Player said: "It's been amazing week. We thought we had a good bunch of horses but this has exceeded our expectations.

"We liked this colt at home and he was one of the ones that we were looking forward to bringing here, and we were fortunate that everything fell into place. Blyton has been one of those star horses for us this year and we were lucky that he won on Saturday - he's now rated 92.

"We're very fortunate to have a fantastic team of staff. The team work incredibly hard, they have some early mornings here but they do an amazing job."

Stephen Hillen was another to show staying power, as the agent stretched to 400,000gns for a Kingman colt offered by Stauffenberg Bloodstock as the session entered the closing stages. The colt is due to race in France for owner Sheikh Mohammed Obaid Al Maktoum and up-and-coming trainer Henri-Francois Devin.

"Sheikh Obaid asked me who I thought the best trainer in France was, and I said Henri Devin," said Hillen, who campaigned Group 3 winner Haggle with the trainer before her sale to the Wertheimer brothers for €1.3 million. "This will be his first year training for Sheikh Obaid – we bought a couple at Arqana to go to Henri as well.

"Everyone wants a Kingman and this was a gorgeous horse, the best horse in the sale we thought," he continued. "We had to up our estimate when we saw him in the ring, he was just so relaxed. Having said that, that was our last bid. He has French premiums so if he's any good he has a chance to get it back."

The colt was bred by the Wildensteins' Dayton Investments out of the winning Legende Bleue, a Galileo half-sister to Prix d'Harcourt winner Loup Breton. The family goes back to 1970s Oaks heroine Lupe through the blue hen Louveterie, dam of Loup Sauvage and Loup Solitaire.

"We're very honoured to be sent horses by the breeder," said Philipp Stauffenberg. "This was a lovely horse and we're grateful for the chance to be involved with these great pedigrees."

Kingman finished Book 2 as the leading sire by average with a return of 256,110gns per horse for nine lots sold. His sons and daughters brought turnover of 2,305,000gns, headed by the sale-topping colt who fetched 750,000gns from Stroud Coleman Bloodstock on Monday.

The son of Invincible Spirit has remained at a fee of £55,000 during his four seasons on covering duty at Banstead Manor Stud.

Shadwell dipped into the market early during Monday's session and barely let up throughout the three days, including when going to 230,000gns for a Lope De Vega colt offered by Pier House Stud late in the concluding session. The youngster is out of the Listed-winning Hennessy mare Mousse Au Chocolat, and had been pinhooked by Peter and Ross Doyle for €75,000.

"I'm a big fan of Lope De Vega," said Shadwell racing manager Angus Gold. "In the last few years his yearlings have seemed to get nicer and nicer, I've seen some lovely horses by him.

"Kevin Prendergast was in love with this horse and Sheikh Hamdan was keen to buy the colt for him. He looks a proper athlete."

Shadwell finished Book 2 as leading buyer by aggregate, with a total outlay of 6,870,000gns - a figure that accounted for 14 per cent of the sale's turnover.

The operation, whose flagbearer Battaash was unearthed at this sale three years ago for 200,000gns, secured 40 yearlings at an average price of 171,750gns.

Expanding on his activities during Book 2, Gold said: "My brief, in a perfect world, is to buy a couple of horses for just about every one of Sheikh Hamdan's trainers - some of which he'll give to his brother.

"Where possible I try and work with the trainers. Everyone has different opinions and on some of the big horses you'll get four or five trainers all on the same one, then there can be a little bit of politics.

"Every year the aim is to buy athletes, and occasionally you get lucky and find a Battaash. We've bought some proper horses in Book 2 down the years.

"Sheikh Hamdan is such a supporter of the industry, and at the moment we're very lucky that the whole family is keen to support it. Their hunger for racing is undimmed, which is fantastic and I think there's a lot of people very grateful for it."

It wasn't just buyers leaving Park Paddocks with a spring in their step, as breeder Cyril Humphris was among those left to toast a productive sale having sold an Oasis Dream filly to Shadwell for 280,000gns through Barton Stud.

"It's been a wonderful family for me and she's a beautiful filly, but I already have four fillies from this family and one has to put some money in the treasury at some point," said Humphris with a rueful smile. "The page speaks for itself: it's a sprinting family. I can't compete with Enable so I have to fish in shallower waters."

The filly is out of the Royal Applause mare Goleta, making the yearling a half-sister to the Group 3-winning Dibajj and the Listed scorer Black Sea.

"The mare keeps having fillies, I've had nothing but fillies," continued Humphris, who was accompanied by Barton Stud manager Tom Blain.

"I keep the mare in France but I have a very strong link to Barton Stud, they've been good to us down the years. I've also had horses with Mark Prescott occasionally, I think he's a fantastic trainer." 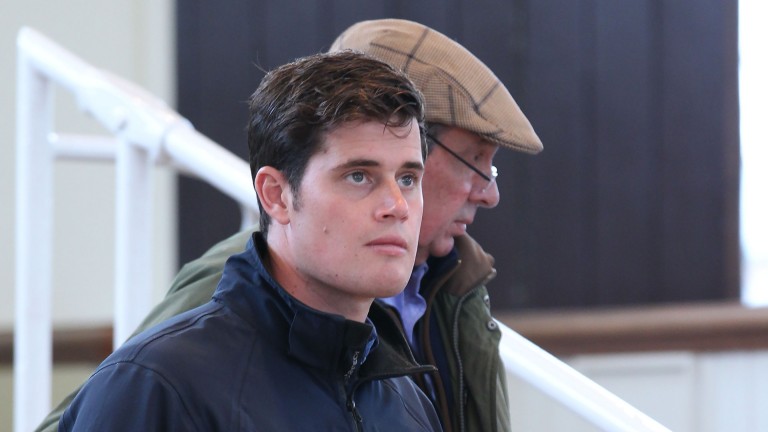 Tom Blaine watches the bid board tick over on lot 1,118
Laura Green
Despite having been done a good turn by Oasis Dream, Humphris expressed his affections for another of Newmarket's stallion residents, Dalham Hall Stud's Iffraaj.

"The mare is in foal to Iffraaj, I have two fillies by him in training too," he said. "I started using him when he was around five grand, now he's up to forty and, if I can afford it, I'll stay with him when he's even more expensive. Now that I've sold this filly I can go back to him!

"Oasis Dream has been a fantastic sire too. I concentrate on sprinting and he seemed the ideal mate for her."

After three days of selling, Book 2 had generated a set of results that bore a striking similarity to those recorded 12 months ago.

The clearance rate was up to 86 per cent, with 631 of the 736 offered yearlings finding a buyer.

At the close of trade on Wednesday, Tattersalls chairman Edmond Mahony said: "In 2011 the combined turnover of Books 1 and 2 of the Tattersalls October Yearling Sale was a little under 77 million guineas.

"Seven years later the combined turnover at Books 1 and 2 has risen to a new record well in excess of 150 million guineas. These are pretty staggering numbers, especially following on from the extraordinarily strong 2017 October Yearling Sales which we felt would be so hard to match.

"The key to the huge advances in recent years is the quality of the stock. The leading British and Irish breeders, as well as a number of their French and German counterparts, consistently place enormous faith in the October Yearling Sale and top quality yearlings combined with racecourse success bring the buyers to the sale."

FIRST PUBLISHED 9:28PM, OCT 17 2018
I already have four fillies from this family and one has to put some money in treasury at some point!

Half-brothers to Gear Up, Star Of Emaraaty and Shutter Speed among standout lots Eldrickjones and Apollo One head Tattersalls August Online Sale offering Lots to look forward to at the revamped Goffs UK August Sale Why the progeny of underwhelming sire Golden Horn could represent real value How Covid-19 is giving an inadvertent boost to bloodstock sales around the world Fasig-Tipton the first thoroughbred sales company to accept cryptocurrency