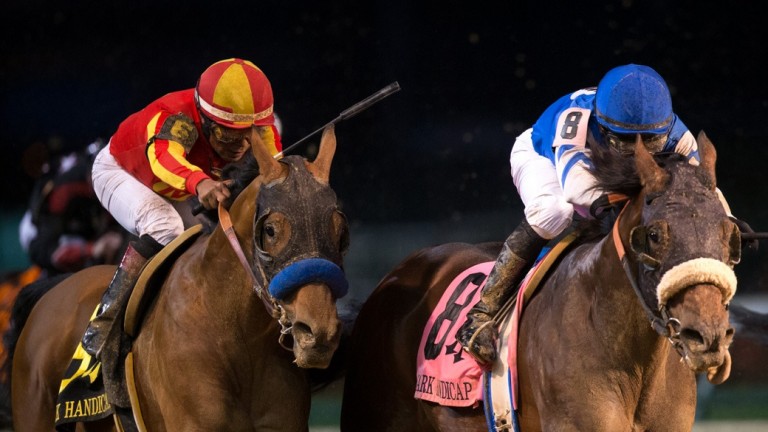 Grade 1-winner Effinex has been retired to stand at Questroyal Stud North in New York.

The five-year-old son of Mineshaft ran 28 times from three to five and won the Grade 2 Suburban Handicap at Belmont twice, as well as the Grade 1 Clark Handicap at Churchill Downs and the Grade 2 Oaklawn Handicap.

All of his nine wins came on fast ground from 1m1f to 1m2f, and finished second to American Pharoah in the Breeders' Cup Classic last year. Effinex also competed in this year's Classic, finishing seventh behind Arrogate.

Effinex will stand next year for a fee of $10,000 alongside Courageous Cat and Golden Ticket, who will both stand at $6,000.

Barry Ostrager, who owns Questroyal Stud North, told the Blood-Horse: "Effinex is the most accomplished sire to start his career in New York, hands down.

"As spectacular as the New York programme has been, there has been a perceived void, and the owners of high-quality mares have shipped them to Kentucky to be bred, believing - I think wrongly - that there were no New York stallions of equal quality.

"With the arrival of Effinex, resident mares can now be bred to a stallion that successfully competed with and defeated stallions in Kentucky standing for $40,000 and $50,000 without all the transactional expenses of shipping."

Breeder Dr Russell S Cohen, who raced the horse in the colours of his Tri-Bone Stables, told the Blood-Horse: "Part of it is sentimental. He is not just a New York-bred, he's third generation. And despite all he's done for me, I owe him more. I want him here where I can keep an eye on him; there's just a lot of emotion."

"That soundness element is really important to racing. This is a dynamic, durable, and fast horse."

FIRST PUBLISHED 2:44PM, NOV 30 2016
Effinex is the most accomplished sire to start his career in New York, hands down