James Thomas reports from the two-day auction at Park Paddocks 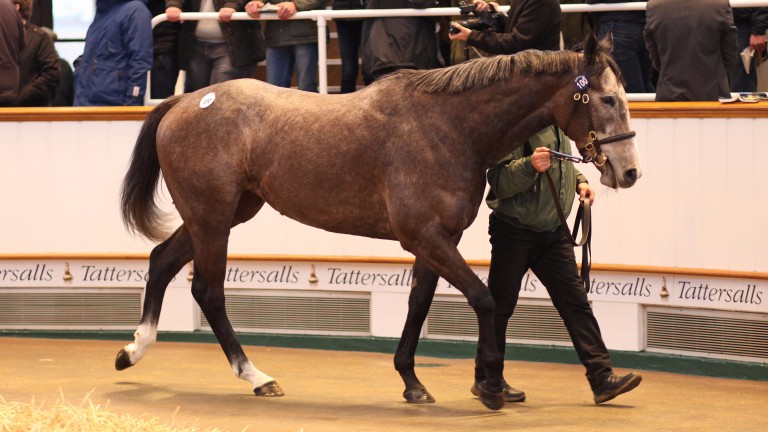 Thursday saw Tattersalls open it’s doors for the first time in 2017 for the opening session of the two-day February Sale, and it was a day of trade that produced a record price for the auction, with Mick Flanagan going to 500,000gns for the star attraction Easton Angel.

The bidding areas noticeably filled as the elegant daughter of Dark Angel strode purposefully between the acorns, and auctioneer John O’Kelly’s call of “who is going to be big, bold and brave?” was answered with an opening bid of 100,000gns.

Several parties made a play for the Castlebridge-consigned lot, including Jake Warren, John Dance and Daniel Creighton of Salcey Forest Stud and Ritchie Fiddes, who owned the grey filly in partnership with Al Shaqab Racing. But ultimately it was Paul Messara, manager of Arrowfield Stud in Australia, and Flanagan that persevered longest, until a bid of 500,000gns from Flanagan, stood just inside the main entrance, brought O’Kelly’s hammer down.

“I’m not sure what she’ll do yet,” the agent said of the four-year-old.

“I came here to buy her to breed from, but I’ve been told there’s plenty of racing left in her. We have that option but we’ll have to just let the dust settle and see what happens. She’s for an undisclosed, new Europe-based client and she’ll stay in Europe.

“She’s a good, quick filly. As a physical she’s gorgeous, she moves like a panther and has great shape and size. Whether we put her back in training or not I’m not sure, but hopefully going forward she can produce plenty of foals that look like her.”

Trained by Michael Dods and bred by James Waldron, Easton Angel won four of her 11 starts, including a brace of Listed successes. She also achieved some notable placings behind the likes of Acapulco in the Queen Mary, Besharah in the Lowther Stakes and subsequent Group 1 winner Marsha in the Listed City Wall Stakes at York, the latter performance earning her a peak Racing Post Rating (RPR) of 113.

She is out of the Elnadim mare Staceymac, a half-sister to Listed winner Kalahari Gold, and was picked up by Fiddes and Smart for £30,000 from the 2014 Goffs UK Premier Sale.

Thursday's second-top lot came in the shape of Dressed In Fur, a Group 2-placed daughter of Excellent Art offered by the Coulonces Consignment, who went to Cormac McCormack, stood with MV Magnier and Paul Shanahan, for 155,000gns.

The four-year-old, who won three times, is out of the Holy Roman Emperor mare Little Empress, who is herself out of an unraced sister to Pivotal.

“I’m very happy for the owners,” said the Coulonces Consignment’s Anna Drion, who was paying her first visit to the February Sale as a vendor.

“I’m delighted to come over here from France with a nice horse too. The owners decided they really wanted to come here as there’s so many buyers and it seemed like the right thing to do. It’s nice to start the new year with a sale like this.”

Dressed In Fur, whose further family includes the top-level winners Araafa and Always In Charge, was trained by Pia Brandt to finish second to Donjuan Triumphant in the 2015 renewal of the Criterium de Maisons-Laffitte.

The first lot to break the six-figure barrier came from the Godolphin draft, with Gay O’Callaghan going to 115,000gns to secure Masaya for the broodmare band of Yeomanstown Stud.

The nine-year-old daughter of Dansili won twice for Clive Brittain and retired with a peak RPR of 97. She has so far produced two winners from two foals of racing age, Waslawi and Shamsaya, while her Dawn Approach two-year-old brought 70,000gns when purchased by Jill Lamb at Book 1 of the Tattersalls October Yearling Sale.

Masaya was offered in foal to Yeomanstown’s flagbearer Dark Angel, who will stand the 2017 breeding season at a career-high fee of €65,000 on the back of supplying the likes of dual Nunthorpe winner Mecca’s Angel.

From limited opportunities the Dark Angel over Dansili cross has already borne fruit, with Listed winner Vona being by the son of Acclamation and out of the Dansili mare Trading Places.

Another Godolphin-consigned mare in foal to Dark Angel also drew plenty of admirers, with Eamonn Reilly of the BBA Ireland eventually securing Blockade for 85,000gns. The winning daughter of Kheleyf was bought on behalf of Maurice Regan of Newtown Anner Stud, owner and breeder of Fascinating Rock.

“She was a good, fast two-year-old," said Reilly of Blockade, who ran second in the 2013 Rockfel Stakes. "She'll go to Fascinating Rock - he's being well supported and is going down really well."

The familiar figure of Tim Gredley stepped into the fray as evening began to set in, going to 110,000gns for the winning Azamour mare Labise from the Godolphin draft. The six-year-old was offered in foal to Derby and Arc hero Golden Horn.

"We're trying to build up the broodmare band at Stetchworth Park,” Gredley said. “We cut down a bit and now we're trying to get a bit more quality. We have 15 mares at the moment and she ticked all the boxes we were looking for. Golden Horn is hopefully an exciting new sire. We came here for one horse and got her. We'll have a think about who she goes to this year.”

Labise won one of her four starts for Ralph Beckett back in 2014. She was purchased by Rabbah Bloodstock for 170,000gns at the 2015 Tattersalls December Mares Sale in foal to Sea The Stars, and produced a filly by the Aga Khan’s stallion last year.

The first major strike of the day was landed by charismatic Australian owner Paul Makin, who went to 80,000gns for the unraced Elusive Quality mare Murhibaany from the Shadwell draft.

“She’s been bought for Marcel,” revealed the owner, who is standing the son of Lawman at the National Stud at a fee of £5,000. “That was my final bid though, I wrote down the price that I would go to and that was right on the button. It’s a nice page, she’s got no convictions and she’s from a nice family.”

Murhibaany, a half-sister to Listed winner Haatheq, is out of Alshadiyah, who won the 2000 Firth of Clyde Stakes for John Dunlop.

The second dam is the champion two-year-old Shadayid, who is also the dam of Group 3 winner and 1,000 Guineas third Bint Shadayid.
Making also commented that the business of standing a stallion was proving a tricky process.

“We’ve got a month to go and I’d like a few more mares,” he said. “I don’t know exactly how many he has booked in at the moment, the paperwork is diabolical, I’ve got to tell you! It’s really quite surprising when you’ve never done it before.”

A pair of Frankel fillies were offered during the opening session, with the first of them, Dream In Colour, going the way of Matt Houldsworth of Howson and Houldsworth after the bidding had crept steadily upwards to 75,000gns.

The filly, an unraced three-year-old daughter of the dual world champion and the southern hemisphere Group 3 winner Colour, was offered from the draft of Godolphin.

"It's not every day that you get to buy a Frankel," Houldsworth said of the Australia-bound filly "She's out of a highly rated mare who sold for a lot in her day in Australia [Darley paid A$1.6 million for Colour as a yearling] and is big, strong filly."

The other Frankel, Carry A Flame, was knocked down to John Walsh Bloodstock for just 23,000gns. The filly, who shares her page with the likes of Cerulean Sky, was bred by Darley but failed to make the track for Andre Fabre.

Despite having another session to go the opening day of the February Sale surpassed the previous record for turnover, with 157 of the 185 lots offered generating an aggregate of 3,273,300gns, an average of 20,849gns and a median of 7,000gns.

FIRST PUBLISHED 7:59PM, FEB 2 2017
I came here to buy her to breed from, but I’ve been told there’s plenty of racing left in her