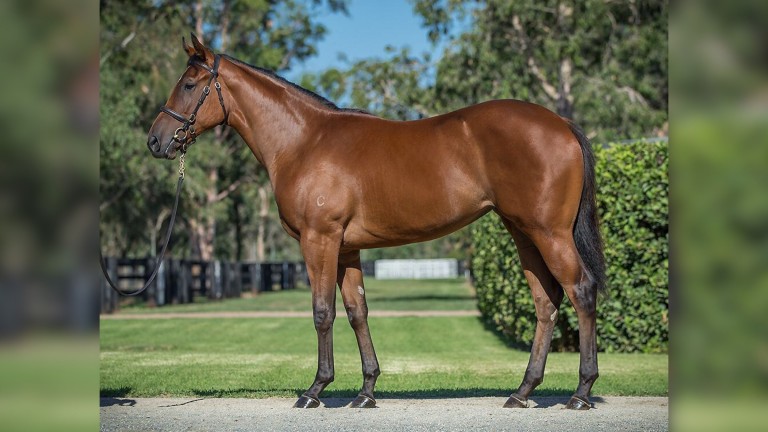 It is not only connections of horses running at Saturday's high-class Randwick Group 1 meeting who will be watching on in anticipation but vendors for whom results have the potential to dramatically boost the fortunes of the yearlings they will be offering from Monday at the Inglis Australian Easter Yearling Sale.

Coolmore, who has a draft of 34 yearlings catalogued at Riverside stables, will be offering a sister to Sires' Produce Stakes contender Long Leaf and a brother to Blue Diamond Stakes winner Catchy, both by Fastnet Rock, at next week's sale.

Coolmore's racing, sales and marketing manager Sebastian Hutch said the colt had run a strong race in the Golden Slipper when sixth after jumping from barrier 15.

"When he won the Merson Cooper in the spring, Kerrin McEvoy was of the view that he had the autumn two-year-old races written all over him, but by the same token, he was going to be better at three, so the Sires' has always looked a really suitable race in terms of profile," Hutch told ANZ Bloodstock News.

"It is fair to say, from a better gate he was likely to be in the finish. The application of blinkers has sharpened him up a little, which tends to be the case with the Fastnet Rocks. He is a high-class colt and David Hayes thinks he will be hard to beat."

Coolmore will offer Long Leaf's sister, who is the fourth foal out of the winning mare Frustrating, herself a half-sister to Group 1 winners Tiger Tees and Terravista and Group 2 winner Ball Of Muscle.

Frustrating is also a half-sister to the former Singapore Horse of the Year Super Easy, by Darci Brahma, who is now a New Zealand-based stallion, and Listed winner Our Lukas. The Fastnet Rock sister to Long Leaf is being offered as Lot 144.

"It would be a fantastic update if Long Leaf was able to win or run well in the Sires'. She is a beautiful filly in her own right and, to be perfectly honest, she stands up to the colts irrespective of her brother," Hutch said.

"She is a very promising athlete, so we expect her to be very well received over the course of the weekend as she has since her arrival here. She was popular on the farm, is popular here and she has a world-class pedigree with a cross that is incredibly potent as evidenced by Long Leaf and Ennis Hill."

The brother to the Lindsay Park-trained Catchy, who runs in today's Group 3 PJ Bell Stakes over 1200m at Randwick today, will be offered by Coolmore as Lot 67.

"He has a lot in common with Catchy as a yearling. He is a big, strong, fast looking horse like she was," he said.

"Catchy was Group 1-placed as a three-year-old at weight-for-age, which is a feat in itself, and while she hasn't enjoyed the best of luck in the better races this season, the PJ Bell Stakes looks a nice stepping stone into the better races for the balance of the autumn and into the winter."

Coolmore's resident sire So You Think, who has 12 yearlings on offer at the Easter Sale, could also receive a timely boost via talented three-year-old son and last-start Rosehill Guineas winner D'Argento, who lines up in the Doncaster Mile.

Hutch was far from surprised by So You Think's purple patch of stakes winners, which along with the Chris Waller-trained D'Argento included recent stakes winners The Pinnacle and Think Bleue.

"We have always had a huge amount of faith in So You Think and he has had a tremendous run, in particular recently," Hutch said.

"In the spring, Chris Waller was of the opinion that he had at least two Group 1-calibre So You Think colts. Unfortunately, one of those, Calculated, sustained an injury, but the patience Chris has shown with D'Argento is being rewarded now.

"He was unlucky not to finish closer in the Randwick Guineas and Hugh Bowman is on record as saying that he probably could have won the Hobartville had he ridden him more aggressively. He goes into the Doncaster with a leading chance.

"It is a strong looking race, but he is a high-class colt and the hustle and bustle of the race looks as though it will suit him."

Lonhro stallion Pierro, who also stands at Coolmore and has 21 yearlings catalogued, has ten stakes runners across the country today headed by Australian Derby contender Levendi, himself already a dual Group-winning colt.

Pierro is also the sire of Australian Derby runners Furore, who is trained by Kris Lees, and the Robbie Laing-trained Pissaro.

"It is demonstrative of the calibre of horses he is producing," Hutch said. "It is the most competitive time of the year and he is producing runners in lots of good races."

Widden Stud will also be keeping a close eye on the Peter Gelagotis-trained Levendi in the Australian Derby, with the last-start Tulloch Stakes winner's half-sister, by Sebring, to be offered as Lot 207.

The Sebring filly is the fourth foal out of the stakes-placed Redoute's Choice mare Lipari, whose two foals to race are both winners including Levendi. The filly's second dam is the SAJC Australasian Oaks winner Tully Thunder.

Widden Stud marketing and nominations manager Ryan McEvoy said on Friday that the Sebring filly was one of the best by the More Than Ready stallion they had offered in recent years.

"Outside of the fact she is a half-sister to Levendi, she is a really cracking filly from a physical viewpoint as well," McEvoy told ANZ Bloodstock News.

"She is one of those really neat looking Sebring fillies who put their head down. She is as good a moving Sebring filly that we have had for a long time. There is also enormous residual value there as a broodmare.

"She is a half-sister to a Group 2 winner and a potential Group 1 winner, and a granddaughter of a Group 1 winner. That is a pedigree that will stack up in any major sale over the next decade."

Also on offer at the Inglis Australian Easter Yearling Sale is a Rubick half-sister to ATC Champagne Stakes winner The Mission, who runs in today's TJ Smith Stakes.

The filly, who is also a half-sister to the stakes-placed Smart Amelia, is being consigned by Edinglassie Stud as Lot 254.

Group 1 winner Encosta De Lago mare English, who also runs in the TJ Smith Stakes having been placed in the race the past two years, has a Snitzel half-sister being offered by Newhaven Park next week. She is catalogued as Lot 77.

So You Think's former jockey enjoying break after 25 tough years

FIRST PUBLISHED 6:00PM, APR 6 2018
When Long Leaf won the Merson Cooper in the spring, Kerrin McEvoy was of the view that he had the autumn two-year-old races written all over him