The colt was offered by Lammerskraal Stud 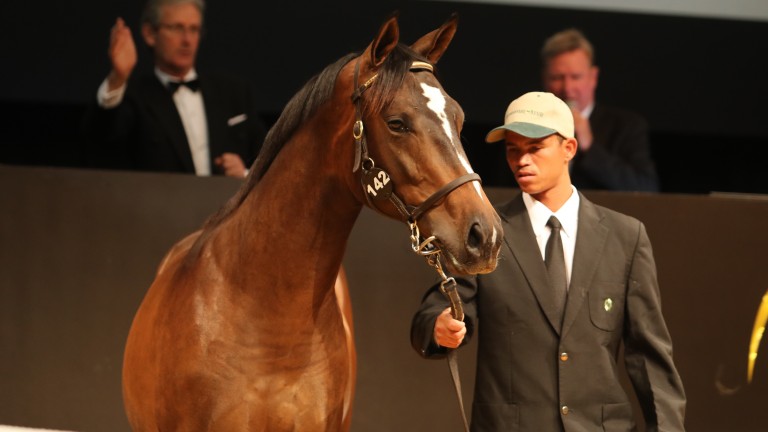 Offered by Lammerskraal Stud, the son of Dynasty is the first foal out of Jet Master's Group 1-winning daughter Viva Maria.

"He's a lovely individual that has a real stallion's pedigree," said Smith, who purchased the colt and a subsequent R3 million (£178,000/€206,000) Captain Al filly from the close family of Taghrooda. "Both have been bought for a syndicate of buyers."

Two colts hit the R4.5 million (£268,000/€310,000) mark early on during Sunday's session, the first coming for a Captain Al colt who was knocked down to David Redvers on behalf of Sheikh Fahad Al Thani.

The same price came for Starship Legacy, a son of Dynasty from Lammerskraal Stud who was signed for by Coolmore Australia on behalf of a partnership.

"He's a lovely colt, and really as good a colt as you'd see anywhere in the world," Tom Magnier said of the half-brother to Group 1 Cape Guineas winner Solo Traveller. "I've been really impressed with the set-up here, and what a place it could become if there was freedom of movement."

Al Thani also echoed Magnier's sentiments, saying: "This is very much an up-and-coming industry and we're delighted to have bought two horses here." The sheikh also purchased another colt by the same sire for R3.25m (£193,000/€220,000) named Frank Lloyd Wright a lot later.

He added: "The sale's in a great location in the middle of Cape Town and I think it's on a par with the top auctions across the world. It's well set up and held at a good time of year.

"They've been extremely hospitable here and I've had a very enjoyable time, which also included climbing Table Mountain and swimming with sharks," he added.

Al Thani's second purchase came from Gaynor Rupert's Drakenstein Stud, which had enjoyed a phenomenal first day with its consignment.

The second foal out of Group 2 third Pacific Dynasty, Frank Lloyd Wright hails from a second generation Australian pedigree of Group 1 AJC Flight Stakes winner Dashing Eagle. Trainers for both horses have yet to be decided.

Coolmore were on the board once again when Peter Doyle went to R2.5m (£148,000/€171,800) for the last yearling by Frankel to go through the ring, a filly out of a half-sister to Cameron Highland from the family of Grade 1 winner Arravale.

China Horse Club increased their investment in South Africa once again yesterday when going to R2.8m (£165,200/ €193,200) for the What A Winter colt Superstitious.

Knocked down to Mick Flanagan sitting in company with Teo Ah King, the Maine Chance Farms-consigned yearling is out of the winning Giant's Causeway mare Seeking from the North American family of Devil's Orchid and Points Of Grace, as well as Nassau Stakes winner Favourable Terms.

"He's a precocious type we really liked," King said. "We went a bit over budget but hopefully it will be worth it. I've been really impressed with the organisation here, and the fact we've spent a lot of money speaks for itself.

"South Africa is working hard on the exportation agreements and this is paramount to how quickly our operation develops here. Coming here seemed like the final frontier for us to buy horses, having started a couple of years ago. This is my first visit and it's an extremely professional set-up."

A filly by the late Scat Daddy, the only yearling by her sire to have ever sold in South Africa, showed her rarity value when selling for R2.3m (£136,000/ €160,000) to trainer Charles Laird bidding on behalf of Markus Jooste.

Regular Premier Sale visitor Amanda Skiffington had labelled herself as a professional underbidder when out of luck for a number of yearlings over the two days, including the sale-topping son of Trippi, but she secured Magic Mike a little later for R2.1m (£125,000/ €144,000).

Bought on behalf of Fiona Carmichael - who in addition to her British tally already has interests in seven horses in training in South Africa - the colt is from the second crop of Twice Over and a half-brother to triple Group 2 winner Louvre.

"We're delighted to have bought him, as he's a lovely horse we really rated. He's not going to be an early two-year-old type but will mature into a lovely horse in time. We hoped he might be cheaper!" Skiffington said.

Further European investment came from Henri Bozo of Ecurie des Monceaux and partners when they bought the Var filly Carioca for R1 million (£60,000/€69,000).

Offered from Avontuur Farm where her sire stands, the October-born yearling is the second foal out of Group 3-winning General Nediym winner Miss Ipanema whose family includes New Zealand Group 2 winner Down The Road. They also went to R500,000 (£30,000/€34,360) for a filly from Duke Of Marmalade's first South African crop.